They say that the "quiet book" is dead, but The Scarecrow's Dance is proof that it isn't; although, as master storyteller Yolen shows us, even a quiet story can include suspense. If we were high school lit students, we would probably tag the conflict here as "man vs. himself," only I suppose it would have to be modified as "straw man vs. himself."

Written in beautifully controlled poetry, The Scarecrow's Dance is about a straw man who gets free of his pole and begins to dance away. Then he overhears a farm child's prayer and rethinks his purpose in life. 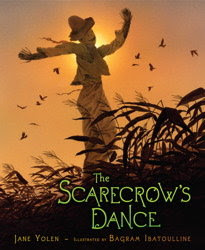 I was actually a little surprised to come across a prayer in a picture book, but you'll find that the plot calls for it, and no, this isn't just a story for families who pray. It does make you think about faith in a new way, however. For one thing, who besides God might be listening to a prayer, and how might those words of hope affect them?

If Yolen is best known for Owl Moon and How Do Dinosaurs Say Goodnight? then Bagram Ibatoulline is probably best known for illustrating The Miraculous Journey of Edward Tulane by Kate DiCamillo. A fine artist from Russia, Ibatoulline renders Yolen's scarecrow with nighttime mystery and the slightest touch of humor. His cornfield and crows are especially beautiful, stark shapes against a dim sky. The farm child almost looks like he came from a Norman Rockwell painting, but then, that matches the tone of the story, with its emphasis on down-home values such as plain old hard work.

Verse in a picture book can be badly mishandled, but we're talking Jane Yolen here. I'll give you a sample:

He shrugged his shoulders,
And a grin
Just like a corn row,
And as thin,
Broke out along
His painted face.
He gave a leap—
And left his place.

In a day when "do your own thing" has permeated our culture, it's actually a risk to write a book like this one, with a message about doing your duty. What impact does fulfilling your responsibilities have on the lives of others? Read about Jane Yolen's dancing scarecrow for a new take on a very old question.

See also Scarecrow by Cynthia Rylant and Lauren Stringer, The Little Scarecrow Boy by Margaret Wise Brown and David Diaz, and, on a related note, Leaf Man by Lois Ehlert.
Posted by Kate Coombs at 11:34 AM