John Scieska's Trucktown series, created in cahoots with three talented artists, illustrates the perils of going commercial. The books work in some ways, but trip themselves up in others. I remember picking up the first one in a bookstore, thinking, Scieska and trucks! How cool is this going to be?!? And then feeling a tiny bit disappointed.

Here's the backstory: John Scieska linked the idea of boys not reading with the fact that there aren't a lot of what I call "rowdy boy books" out there. (See his collection for older kids, Guys 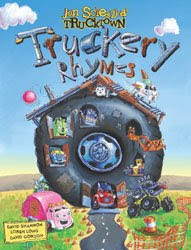 Write for Guys Read.) He then got together with the aforementioned illustrators to craft a picture book series about trucks.

Great idea, good target audience, so why am I not completely on board this train? Only that after The True Story of the Three Little Pigs by A. Wolf, and The Stinky Cheese Man and Other Fairly Stupid Tales, I expect to be dazzled by Scieska's imagination. I know I'm holding him to an unfair standard, yet it's one he has set himself. The Trucktown books are delightful, but they're just a little too commercial and even ordinary for me. They remind me of the Thomas the Tank Engine books, only with greater craftsmanship.

The trucks in Trucktown are recurring characters; not surprisingly, most of them resemble small boys (and a few girls). Other key ingredients are lots of action in the form of crashing and bashing, the closely related factor of crashing and bashing words that are fun to shout, and humor along the lines of the Three Stooges. Yep, the guy knows his audience! So, for example, in Truckery Rhymes we get things like this:

As you can see, this particular entry in the series is a set of poems that parody well-known Mother Goose rhymes. One question I have is whether the kids listening to this know the original rhymes and get the connection, or whether that joke is mostly for parent readers. It might be fun to read the two side by side, letting children in on the joke.

As is often the case with a series, some of the rhymes are hampered by the inclusion of character names. If you don't know the characters from reading other books in the series, will you be able to relate to the Trucktown nursery rhymes? Another question Scieska seems to face is just how many things can trucks do, especially if your goal is almost always to have them crash?

Ultimately, in connecting the truck rhymes to the originals, I find myself wondering if they can function outside the book, without the pictures. Are they stand-alones, and should they be? I would say a few of them are, but most need the context of the book, the illustrations, and even knowledge of the series to function.

The best of the rhymes, in my opinion, are the ones with ironic twists thrown in, reminding me that what I like most about Scieska's writing is his off-the-wall humor (pun entirely coincidental!):

The three illustrators involved in this project are highly gifted. Each truck has a face and a personality, which isn't that easy to render, when you think about it. The colorful, slightly cartoonish art suits the good cheer and high action in the Trucktown books.

Of course, I might be a little more thrilled about the series if I were a four-year-old boy. When I was fourteen and reading bedtime stories to my little brother, who is ten years younger, I knew that if a book had trucks in it, he would be deliriously happy. And that may be the simple secret of the success of the Trucktown books. Just like those small boys who adore Thomas the Tank Engine, kids who like trucks are going to fall in love with Scieska's series.

When they're a bit older, perhaps they can graduate to the more sophisticated humor of this genius author's classic titles.
Posted by Kate Coombs at 11:44 AM