I picked up this book because I recognized Betsy Franco's name; she's edited a couple of brilliant poetry collections for and by teens (Things I Have to Tell You and You Hear Me?). Now she tackles another tough topic—the meaning of zero—in a clean, simple way.

Oh, nil, nul, nought: that's the poetry of the strangest number of them all. It's neither positive nor negative, and it's accounted as an even number. It's a placeholder, and it's nothing. It's half of the binary code, it's the off switch for a light or just about any other kind of toggle. We think we know what it means and why it matters, but for centuries, no one even had a symbol for it. Over time, mathematicians from China, Greece, and especially India evolved ways of thinking about and denoting zero—first as a placeholder and eventually as a number in its own right. 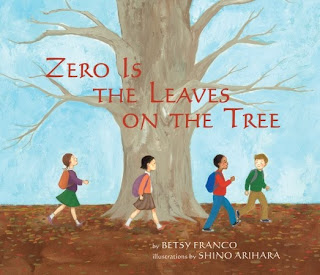 In Zero Is the Leaves on the Tree, Betsy Franco focuses on defining zero as a number indicating the absence of objects or of quantity.

Some might argue that this premise is slight, but I have two responses to that: first, as a math teacher, I find that concepts adults are accustomed to are often baffling to young children; and second, as a poet, I admire the metaphors Franco uses in what is essentially a long poem. Even as she presents what seems to be a definition of a mathematical concept, she and her illustrator evoke thoughts of loneliness, leaving, and emptiness with their depictions of zero.

Arihara is an apt illustrator for this poetic, philosophical book with her gouache paintings of children at school and in nature. (Be sure to compare the lovely front and back endpapers.) Seasons pass in Zero Is the Leaves on the Tree, which speaks of change with lines like the following:

Zero is...the sleds on the hillside when the snow turns to slush....
Zero is...the blossoms in the garden just before the buds open.

And perhaps my favorite:

Zero is...the kites in the sky once the wind stops blowing.

There are very few great picture books about math, but I'm going to put Franco and Arihara's book right next to Schwartz and Kellogg's How Much Is a Million and Hutchins and Denton's A Second Is a Hiccup on my bookshelf.
Posted by Kate Coombs at 11:26 AM