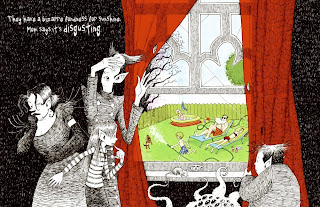 In case you don't think children's books have clout, read this article about upcoming projects from Disney, which includes the note, "Guillermo del Toro appeared on video from New Zealand to talk about his partnership with Disney on its new brand, Disney Double Dare You, which will release scary animated fare." Coraline, The Graveyard Book, and Twilight, anyone?

We've all noticed the surge in YA paranormal, evolving through a list that started with vampires, then moved on to werewolves and now zombies. Over on the urban fantasy side, psychics, witches, and fairies of all kinds have hit the YA stage, with pocket appearances by fairy godmothers and even godsisters. Middle grade fiction is finally getting in on the action with a slow upswing of scary, e.g., Greg Taylor's Killer Pizza, which I just read this morning (YA on Amazon, ages 10-14 at Macmillan). We're even seeing new horror picture books, like Ross Collins' Dear Vampa (see illustration above) and Michael Rex's Runaway Mummy.
A few years after the post-Harry Potter wave of fantasy began, readers started wondering if it was ever going to end. The answer? Not until something else comes along to kick it offstage. In the same way, the post-Twilight paranormal trend appears to be more robust than ever.
Posted by Kate Coombs at 4:17 PM