Announcing the Newbery and Other Awards 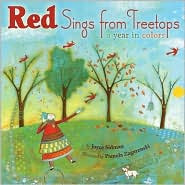 AND the ALSC awards have been announced! Woo-hoo! Here's Betsy Bird's list of key wins, posted this morning on Fuse #8. I will just smugly point out that I called the Newbery Award winner last summer when I reviewed it: When You Reach Me by Rebecca Stead. Hooray! See also my recent glowing review of one of the honor books, Where the Mountain Meets the Moon by Grace Lin. The other three honor books are The Mostly True Adventures of Homer P. Figg by Rodman Philbrick, The Evolution of Calpurnia Tate by Jacqueline Kelly, and Claudette Colvin by Phillip Hoose.

Pretty much everyone was predicting that Jerry Pinkney would win the Caldecott for The Lion and the Mouse, which is just beautiful, but I was also pleased to see Red Sings from Treetops: A Year in Colors by Joyce Sidman, illustrated by Pamela Zagarenski, as an honor book. It's a unique and intriguing poem, a new favorite I acquired last fall, and the illustrations are just right. Of course, All the World by Liz Garton Scanlon, with illustrations by Marla Frazee, is gorgeous, as well, not to mention uplifting. It's the other Caldecott Honor book this year.

I will add, since they're not listed in the above link, that Libba Bray's Going Bovine won the Printz Award for best teen fiction, with honor books as follows: Charles and Emma: The Darwins' Leap of Faith by Deborah Heiligman, Tales of the Madman Underground: An Historical Romance, 1973 by John Barnes, Punkzilla by Adam Rapp, and The Monstrumologist by Rick Yancey.

Maybe you watched the Golden Globes last night, but today is the day for everyone who loves children's literature in a rabid, fantastical, world-changing way. So throw a party, take time to read, and celebrate true wealth: great books!

Update: Here's the ALA's complete list, thanks to a link I swiped from Charlotte's Library. See Charlotte's post for an analysis of sci-fi/fantasy representation among the winners.
Posted by Kate Coombs at 6:45 AM