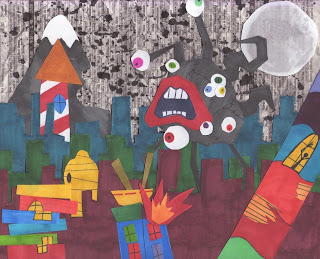 Some children's book writers would make really good characters in books. My top two candidates would be Neil Gaiman (for obvious reasons - have you read his blog?) and James Kennedy, author of The Order of Odd-Fish. We're talking Colorful Individuals. Last year, I brought up Kennedy's book in my post on "What is It with British Writers and Fantasy?" Having praised the Brits for their whimsical or rather off-the-wall creativity in fantasy, I listed a few of the more daringly imaginative American fantasy writers for children in recent years, and James Kennedy made the cut with his first book. The Order of Odd-Fish's convoluted, elegant language, sly Wodehousian humor, and strange details elevate it above its more typical dark-prophecy fantasy plot, so that young readers who appreciate Tolkien as well as Carroll really should take a trip to Eldritch City.

Then there's Kennedy himself, essentially a performance artist of the mad genius variety. Most notably, he challenged Neil Gaiman for his Newbery Award last summer. You can watch Betsy Bird's YouTube recordings of the epic confrontation here and here. Challenged him to a duel, that is, in a presentation unlike any other at the July 2009 American Library Association conference. (Note that no real Neil Gaimans were harmed in the making of these videos.) I know who Kennedy reminds me of: Johnny Depp's Mad Hatter in Tim Burton's upcoming movie version of Alice in Wonderland. This might make some of you run the other direction, but I say we need people like Kennedy in children's literature, which should not be a staid field.

So I am happy to pass along some news about another Kennedy endeavor, the staging of an exhibit of artwork and miscellany inspired by his book. Yes, I realize this is a marketing effort, but it's such a cool one! Take a look at what Kennedy has already collected. I don't know which I like best, the vomiting fish cake, the drawings and paintings, the mask, the home-brewed beer, or teen artist Max Pitchkites' cut-paper illustrations for every chapter of the book. Okay, I do know - so far Pitchkites' work is the most striking. Perhaps you or your child is an Odd-Fish fan, or even a Knight of the Order of Odd-Fish, who specialize in making, not an encyclopedia of all knowledge, but an appendix “of dubious facts, rumors, and myths.... A repository of questionable knowledge, and an opportunity to dither about.” In which case, consider sending your artwork to James Kennedy for the exhibit. Did I mention that it's also a costume party and theatrical exhibition, as well as a site for field trips and writing workshops? Here's part of Kennedy's invitation:

It'll be not only an art show, but also a costumed dance party and theatrical extravaganza. I'm working with a Chicago theater group called Collaboraction to do this. They're going to decorate their cavernous space to portray scenes from the book (the fantastical tropical metropolis of Eldritch City, the digestive system of the All-Devouring Mother goddess, the Dome of Doom, etc.).

Opening night will be a dance party where people dress up as gods and do battle-dancing in the Dome of Doom. In the weeks afterward, we'll bring in field trips from schools. They'll browse the fan art galleries, be wowed by the elaborately decorated environment we've created, take in some performances from the book, and participate in an energetic writing workshop.

The whole shebang will open next April [2010]. The deadline for submissions is March 15.

Makes me wish I still lived in Chicago. I would definitely show up for an opportunity to battle dance in the Dome of Doom.
The piece of art above is Max Pitchkites' "Icthala Rampage." Max explains on Kennedy's website that the image of the moon in the upper right is the grease stain from a cookie; I love that he had set his snack down on a piece of paper and then noticed the possibilities afterward!
Posted by Kate Coombs at 8:53 AM

I don't often comment, but I just wanted to take a moment to say that I am continuing to enjoy your blog -- so much so, that on my own blog, I presented you with a Prolific Blogger Award. If you want to check out the details, visit here: htto://evbishop.wordpress.com

Have a great week and happy reading/writing!

Thanks very much, Ev! I'll be thinking about my own prolific picks for the next few days...