A Review of The Brixton Brothers: The Case of the Case of Mistaken Identity by Mac Barnett 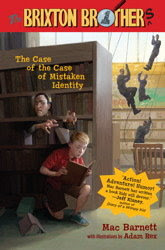 Normally, I would question whether a parody seemingly intended for people over the age of 30 could appeal to kids, but I am reassured by two things: 1) Today's children are familiar with parody in the form of Simpsons and even Spongebob Squarepants episodes, and 2) Mac Barnett covers his bases by providing snippets from a mock-original book series he's created.

And what snippets they are! The target, of course, is the Hardy Boys detective series (whose characters inevitably remind me of boy bands like 'N Sync). Barnett's Steve Brixton believes in those dashing supersleuths, the Bailey Brothers, having practically memorized their books. Here's a sample we're given from Bailey Brothers #13, The Mystery of the Hidden Secret:

"Jumping jackals!" dark-haired Shawn exclaimed, pointing to the back wall of the dusty old parlor. "Look, Kevin! That bookcase looks newer than the rest!"
"General George Washington!" his blond older brother cried out. "I think you're right!" Kevin rubbed his chin and thought. "Hold on just a minute, Shawn. This mansion has been abandoned for years. So who would have built a new bookcase?"
Shawn and Kevin grinned at each other. "The robbers!" they shouted in unison.

(Note the over-use of adjectives and the pointed deliberation. Barnett is having a good time with this!)

When Steve encounters a mystery of his own while fulfilling an obnoxious school assignment, he is surprised and disappointed to find that the Bailey Brothers' methods don't always pan out in real life. He is even more surprised to learn that the town librarians are secret agents.

Yes, I know, that sounds like Brandon Sanderson's Alcatraz versus the Evil Librarians. But trust me, Barnett has a new take on it. For one thing, his librarians are fighting evil. For another, you'll be so caught up in the satire that the librarians will just flow in with the rest of the story. At least, that was my experience reading this book.

Steve's bible is The Bailey Brothers Detective Handbook. It tells him, among other things, how to "size up suspicious characters." This proves useful "if you're eating dinner with safecrackers, or cat burglars, or your mother's new boyfriend." In meeting the latter, Steve checks the book's list of villains, which includes "The Tough," "The Ringleader," and "The Hermit," all very old-fashioned and stereotyped, natch. Rick turns out to be a cop, and Steve solves a case for him in a manner more reminiscent of Encyclopedia Brown than the Hardy Boys, though Rick doesn't accept his solution, not at the moment.

Then Steve's teacher assigns him to research early American needlework. When he goes to the local library and checks out a book called An Illustrated History of American Quilting, a group of shadowy figures bursts through the skylight and doors and starts to chase him. Oddly enough, the Bailey Brothers' list of useful hiding places doesn't help one bit. Pretty soon Steve is stepping into a black limo at gunpoint and having a conversation with a very buff librarian named Mackintosh. All because he checked out a particular book and presented his Bailey Brothers Detective License instead of his library card at the front desk...

I can't even begin to tell you all the little in-jokes (e.g., about posters of basketball players reading books), but Barnett manages to make this story, not only smart, but funny, and without trying too hard. The Case of the Case of Mistaken Identity is tongue-in-cheek all the way. I should note that Barnett doesn't simply satirize the Hardy Boys by setting Steve Brixton up against grim reality; he stylizes the characters around Steve, having them act a little like the players in a Hardy Boys mystery—just enough to be funny.

What this book really reminds me of is M.T. Anderson's Whales on Stilts, which is high praise indeed. Except that Barnett's liberal inclusion of his pseudo-source material makes his story all the more accessible to young readers who might not otherwise understand just what he's satirizing. The fact that this book isn't 600 pages long will also appeal to some readers. (It's a tidy 179.)

Adam Rex's illustrations, appropriately retro and slightly satirical in style, add to the storytelling. You may remember this author-illustrator from The True Meaning of Smekday and his picture book of poems, Frankenstein Makes a Sandwich.

The past decade has seen a wave of books intended for boys, contemporary adventure and mystery series trying to reach a surprisingly sophisticated audience whose expectations have been honed by movies, TV, and video games. Today's 4th-6th graders like to feel like they're in on the joke. So yes, I think some of the kids who watch The Simpsons will get a kick out of something as clever and entertaining as Mac Barnett's Brixton Brothers.
Posted by Kate Coombs at 7:31 AM

Thanks, James! I'm not familiar with your Katie and Ella Bella books (yet), but when I saw your name, I instantly thought, The Boy and the Cloth of Dreams! It's a favorite in my library.

I think I'm going to have to reread the book now, just to revel in the brilliant deadpan all over again. Barnett and Rex are both so *on* in this one!

The Hardy Boys still check out regularly at my library, so I'm not surprised that Brixton Brothers went out right away from the bookshelf. I laughed hysterically while reading it myself!