A Review of Wishing for Tomorrow by Hilary McKay 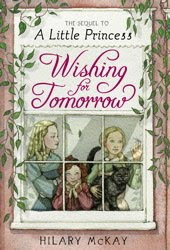 I tend to cringe when I see someone has written a "sequel" of a classic, but this time I didn't: I was pretty hopeful about Hilary McKay writing a sequel to Frances Hodgson Burnett's A Little Princess. Why? Because I'm crazy about McKay's Casson family books and figured that if anyone could do A Little Princess justice, she could.

Happily—oh, so happily—hope was absolutely the right emotion for this book, which I read yesterday and then put down with a thoroughly blissful sigh. What a lovely book this is, imbued, not only with humor, but with subtle touches of tenderness.

Now, a writer in this situation has a strange balancing act to achieve, that of keeping whatever made the original book so good while extending the characters and plot in a blossoming, credible way and even putting her own mark on the story. Which is exactly what McKay does in Wishing for Tomorrow.

Have you ever found yourself wondering what happened to all of the secondary characters after a book was over? As McKay explains in her introductory note, she read A Little Princess repeatedly as a child, and though the ending was in many ways perfect, she was left with a feeling...

That could not have been the whole of it! Surely Lottie and Lavinia, Ermengarde and all the rest of that seething bunch of opinions did not just fade into the shadows. Did they not have a story too? What happened next?

So Hilary McKay proceeds to answer that question, mostly from the point of view of Ermengarde, her new heroine. Lumpish, awkward, insecure Ermengarde slowly comes into her own in this book, becoming a lot less lumpish without losing her essential Ermengarde-ness. Other key characters include Lottie, who is 8 now but still a handful, and Lavinia, of all people. Even Miss Minchin, or the Misses Minchin, come out of the shadows in this book. Without being at all contrived or condescending, McKay brings some of Burnett's least likable characters to further life in a way that makes complete sense.

One interesting story arc is Ermengarde's mixed feelings about Sara leaving her behind—because children are not always as heroic about these things as we would like to think. And Lavinia has a secret, and Miss Minchin (the elder, the terrifying one) is being haunted by her own feelings about Sara Crewe, while Lottie makes friends with the cat next door and blithely causes trouble, though sometimes in helpful ways. (McKay's Lottie owes a nod to her marvelous Rose from the Casson books. And perhaps to the irrepressible Posie of Noel Streatfeild's Ballet Shoes.)

In McKay's previous books, I have found that her humor, especially in regard to the way children talk and interact, is her forte. It's one way in which McKay brings something new to Miss Minchin's Select Seminary for Young Ladies. While Burnett's characters are rich and their encounters sometimes amusing, very few people writing today can show off the quirky thinking of children better than Hilary McKay. For example, when Jessica loans Ermengarde her silk dress to wear to see a performance of Peter Pan with her aunt, she warns Ermengarde not to cry because salt water will stain the silk:

"...but you've got to promise that while you're wearing it you won't cry a single drip!"
"Are there sad bits in Peter Pan?"
"Yes."
Ermengarde groaned.
"Very sad bits, actually! But you can't cry in them because if you do, you've got to take off your dress—my dress, don't forget! Take off my dress..."
"In the middle of the Duke of York's Theatre?"
"Yes! And watch the rest of the play in your petticoats!"

The book further offers episodes such as Lottie's antics in church and the deviously hilarious way Lavinia arranges to take "piano lessons" in the house next door. And we are given insight into some of the events that took place while Sara was still at Miss Minchin's.
McKay has a fine descriptive hand, as well. Here Ermengarde ascends to Sara's former garret in the night:

This author is less inclined to believe in Magic than her predecessor, although Ermengarde's growing friendship with Sara's abandoned rat friend is a tad on the magical side. If you have read both A Secret Garden and A Little Princess, you will have found that Frances Hodgson Burnett exhibits a near-saintly hopefulness about life, feeling that magic is barely hidden beneath the surface of our daily existence. Burnett further believes that people can be magical, even unpleasant ones like Mary in The Secret Garden—that kindness and imagination can make everything new. McKay, though essentially pragmatic, also finds a sort of magic in people. In addition to developing existing secondary characters such as Ermengarde, Lottie, and Lavinia, she adds a new and bolder housemaid named Alice and a scholarly gentleman next door whose nephew, Tristram, appears to be a match for the girls at Miss Minchin's. Even the vicar gets a bigger role.
The book ends with a highly dramatic turn, but it seems fitting in the romanticized Victorian setting, and the final pages bring further satisfaction. We do get to see Sara again, in case you were wondering.

After reading Wishing for Tomorrow, I think you'll feel, as I did, that you know and love Sara and her friends from A Little Princess more than ever. Enriching the original while creating a new world in the setting of Miss Minchin's, Hilary McKay has taken the risky, even brazen idea of a sequel to classic literature and written the proverbial tour de force.
Posted by Kate Coombs at 7:47 AM

I too do not usually read "sequels" such as this. My favorite all time book is A Secret Garden and I loved A Little Princess so it would be hard for me to read someone else's imaginings but you make this one sound intriguing. Thanks for the find I look forward to seeing if you are right!

Thanks for the detailed review, Kate. I am looking forward to this one, even more so now.

I loved "Little Princess" as a kid and when I saw this on the shelf the other day and had the same reaction you did - initial "ick" then, "Hm, maybe," when I saw that Hilary McKay wrote it. I love McKay's Casson family books. Thanks for getting to this one first and for the well thought, well written review.

I'm so glad you loved this too! It made me feel all warm and cozy and happy....