Jane Gets a Makeover 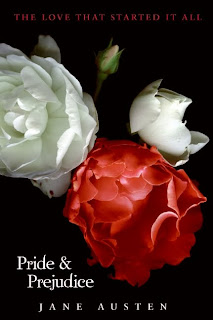 I was making my rounds through a bookstore the other day, scanning the YA (teen) shelves, when my eyes were caught by another imitation-Twilight cover, stark black with a passionate red rose and a couple of white roses hovering behind. I picked it up, expecting to see a title along the lines of Fangs in the Night or My Brooding Werewolf Lover.

But the book was Pride and Prejudice by Jane Austen. With a teaser phrase on the front in all caps: "THE LOVE THAT STARTED IT ALL." The back jacket let me know that there are two more books in this set, Wuthering Heights by Emily Bronte, AKA "LOVE NEVER DIES," and Romeo and Juliet, "THE ORIGINAL FORBIDDEN LOVE."

Just so we're clear, what this means is that Jane Austen, Emily Bronte, and William Shakespeare are jumping on the Twilight bandwagon—courtesy of HarperTeen. (This edition of Pride and Prejudice is ranked #7,707 in sales on Amazon today, not a bad number, really. FYI, Stephenie Meyer's Twilight is currently ranked #121 in Amazon sales. In terms of total sales, Twilight is catching up fast, with more than 17 million to P&P's 20 million.)

So how does Pride and Prejudice stack up against Twilight? Yes, thousands of women just howled in outrage, sounding like Taylor Lautner in full fur. But read on... 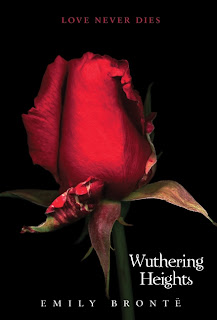 We've got Elizabeth vs. Bella, for starters. Elizabeth is a little older and has way more confidence. She spends most of the book irked at Mr. Darcy and only gradually relents, overcome by a growing awareness of her mistaken assumptions, as well as by Mr. Darcy's unexpected gallantry and his really gorgeous mansion. Bella, for her part, is addicted to Edward Cullen almost from the get-go and is pretty self-effacing, even self-deprecating.

Mr. Darcy vs. Edward? No contest. Mr. Darcy outbroods Edward Cullen and Robert Pattinson put together, and without being melodramatic. Each hero is capable of leaping into the fray to help his ladylove, but Mr. Darcy sacrifices his famous pride on the altar of Elizabeth, humbling himself to aid his enemy Mr. Wickham for her sake. Edward merely beats up a vampire and manages not to drink all of Bella's blood.

As for wit and fine writing, craftsmanship and subtle humor... No, I can't go on. I'm starting to howl like Taylor Lautner. Let's just state the obvious: Jane Austen is a really, really good writer. 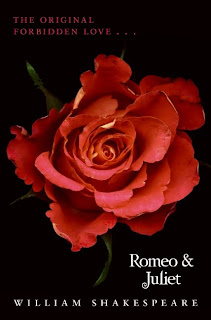 Having gotten a kick out of seeing these new editions, I walked a few steps farther and came across a Marvel Comics version of Pride and Prejudice which insisted on coming home with me. I'm not sure how you feel about graphic versions of classic literature—appalled? amused? But I was curious to see just what the adapter and illustrator had done with one of my favorite books ever.

Apparently this edition was originally published as a series of four comic books. The covers are nicely tongue-in-cheek, each set up to resemble a magazine cover. Fake article teasers used on the book jacket include "Lizzy on Love, Loss, and Living," "Bingleys Bring Bling to Britain," "17 Secrets about Summer Dresses," "How to Cure Your Boy-Crazy Sisters," and, of course, "Who Is Mr. Darcy?" Marvel has kindly included the other three jackets in the back of the book for your enjoyment. (I should warn you that the interior artwork does not look anything like the cover art.)

The oddest thing about this book is the front flap copy, which could have been highly entertaining, but isn't. Not a bit. It seems more like a super-condensed version of CliffsNotes, to tell you the truth, remarking on social relevance, major themes, and Austen's writing style. If the Marvel people were going to go there, they should have just thrown in a more detailed note at the back of the book. 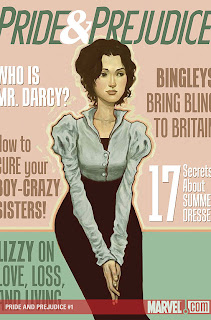 I have to say, Nancy Butler does a very good job of picking out the best of Austen's wonderful dialogue and including it in this graphic adaptation. Think of the book as a movie. Like a movie, a graphic novel has to re-envision a novel as a series of scenes and preserve key dialogue while replacing description and action with visual images.

Presented in such a tight format, P&P does seem a little more soap opera-ish. This impression is aided by Hugo Petrus's artwork, which conforms to comic book conventions by giving almost every woman in the book, and certainly the Bennet sisters, surprisingly full lips for people living in an age prior to Botox. However, to Petrus's credit, he doesn't enhance anybody's breasts except maybe Mrs. Bennet's, and that suits her portrayal as a rather blowsy woman. The only moment that seems truly out of character and anachronistic here is when the artist shows Mr. Darcy holding Elizabeth in his arms (entirely off the ground, cheerleader-catch style) after he has re-proposed and she has accepted. Highly improper! But it's just the one frame, so I think I'll forgive the guy.

Petrus's palette is inclined towards browns and golds, a good match for the era. He manages to give the long dialogue scenes a surprisingly energetic feel by varying his compositions and showing characters' shifting emotions. The only thing that threw me off about the artwork was that in the fourth segment, Petrus's style seems to have changed—maybe he's using a different medium, or the printing method has changed, or he's simply using fewer lines to portray these characters.

As for the artist's rendering of Elizabeth and Mr. Darcy, I wasn't on board at first, but they grew on me. I imagine most of us have pictures in our heads of favorite literary characters, and these didn't match up for me. Still, once I got used to them, I rather liked them, Botox and all. 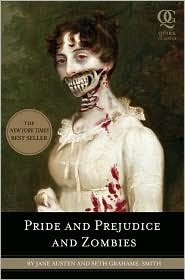 Another version of P&P that has been shelved in the YA section lately is Pride and Prejudice and Zombies by Jane Austen and Seth Grahame-Smith. I had such a good time writing my Amazon review of this book last year that I'll share it with you here:

Imagine a fifteen-year-old girl reading Pride and Prejudice. No, better yet, imagine her watching a DVD of Pride and Prejudice, preferably the one with Keira Knightley. Her best friend is plopped down beside her. They're eating low-fat microwave popcorn and sighing blissfully every so often, when suddenly the girl's younger brother shows up, along with his own best buddy.

The two boys look at the screen for about three seconds and say, "Gross!" Then, with an evil look, the first one says loudly, "You know what would make this better? If there were zombies in it."

"Yeah," his friend says, "hungry for brains. And that girl right there could be a kick-butt zombie fighter."

"Elizabeth Bennet?" the big sister says, appalled, yet vaguely charmed by the thought.

"Ha," her friend says, "she and Mr. Darcy could kick zombie butt together! That would be kinda romantic. In a disgusting way, I mean."

Just then Mr. and Mrs. Collins come on-screen. It doesn't take long for the boys to realize how boring they are. "That guy has to die," says the girl's brother.

"Yeah, and the girl could turn into a zombie," says his friend.

"Okay, you can shut up now," the fifteen-year-old tells the intruders. "We get it. You're funny."

But her brother isn't quite finished. "What this story needs the most is a lot of vomit. Because it makes me sick!"

Um, so, anyway—that's what this book is like. Just exchange the ten-year-old brother for a literate thirty-something screenwriter and you've got this hybrid, which is said to be 85% Jane Austen, 15% Seth Grahame-Smith.

What's most impressive is how smoothly the guy weaves his "unmentionables" and things like the Bennet sisters' martial arts training into the original text. Take this bit, for example:

"Upon entering Meryton...the eyes of the younger [Bennet] girls were immediately wandering up the street in quest of officers, and nothing less than a very smart bonnet indeed, or the wail of the undead, could recall them."

Then there's a parlor game that's all the rage—Crypt and Coffin. Or the fact that London is a walled city divided into military enclaves in order to deal with the zombie menace. Elizabeth's favorite aunt and uncle live in Section Six East, just in case you were wondering.

One thing Grahame-Smith has fun with is letting Elizabeth and her sisters' combat training render them rather bloodthirsty, especially in response to the most irritating characters in the book:

"To the girls, who could not listen to their cousin [Mr. Collins] without taking a silent inventory of the countless ways they could kill him, the interval of waiting appeared very long."

Grahame-Smith also gives Mr. Wickham a much more severe comeuppance than Austen ever did. And Elizabeth gets into angry martial arts face-offs with, not only Mr. Darcy himself, but Lady Catherine de Bourgh.

Austen's "co-author" occasionally misses a beat when it comes to having other characters respond normally to his additions, and he gets a bit carried away with the vomit, but I have to admit, Pride and Prejudice and Zombies is remarkably clever in its own little rotting-flesh way.

Of course, the greatest irony of all is that avowed anti-snob Seth Grahame-Smith has a name that makes him sound like he'd fit in nicely with Darcy and Bingley's elegant London crowd.

Now, zombies aside, what do you think about that phrase on the imitation-Twilight book jacket of the latest edition of Pride and Prejudice? Is this book really "The Love that Started it All?" Well, HarperTeen's other title, Romeo and Juliet, came long before Austen's book and arguably defined star-crossed lovers for all time. Which makes it a better comparison to Twilight, actually! (Hm. How many of you just howled like a drunken Elizabethan?) As for Pride and Prejudice, let's just say that every romance novel written in the past century or so and every rom-com ever filmed, particularly the ones with the slightest hint of initial dislike between hero and heroine or any sort of witty banter, owes a big fat thank you to Ms. Austen. With or without that black cover adorned by a bloody-looking rose.
Posted by Kate Coombs at 8:06 PM

I'd not heard of the graphic novel! I'll have to look for that :) And I love your review of Pride and Prejudice and Zombies!

Thanks, Becky! Let me know what you think of the graphic novel. I was trying to imagine what Jane Austen would have thought...

I like your review, too. Good stuff! Back several years ago when I first reviewed Twilight (before it was such a huge phenomenon) I mentioned that I thought that the early banter between Bella and Edward had an Elizabeth and Darcy-like vibe. Stephenie Meyer actually emailed to thank me for that - she said it was definitely something she was going for, but that not a lot of reviews had pointed it out. So I've always had a soft spot for P&P / Twilight comparisons.

Thank you, Jen. And what a cool story! When people ask me if I think Stephenie Meyer is a good writer, I always tell them that her characters really hook you in and make you care about what's happening to them. Some of the best writers are fairly ordinary as wordsmiths, but they're great storytellers!