Percy Jackson and His Sexy Friends 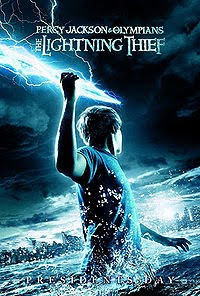 So I went and saw The Lightning Thief movie on Friday. It wasn't bad overall, although it didn't hold a candle to the best of the Harry Potter movies. No full review here, just an observation, and that is, apparently Hollywoodizing a children's book now includes a sensual if not sexual component. Thank you, Twilight. Or should we be thanking the likes of movie directors Judd Apatow, Todd Phillips, and John Hamburg, not to mention the last decade or two of Saturday Night Live writers, all of whom seem incapable of telling a story without a dose of steam?

For example, when Percy Jackson arrives at Camp Half-Blood in the movie, he sets his eyes on his about-to-be-sidekick, Annabeth, as played by Alexandra Daddario. Only in the movie, unlike in the book, Percy and Annabeth exchange a seemingly endless series of longing looks that reminded me of the yearning looks exchanged between Bella and Edward in the movie version of Stephenie Meyer's YA paranormal, Twilight. Here Annabeth Chase's slightly parted pillowy lips seem designed to accessorize her noticeable bosom. Yes, this is the hot version of Annabeth, which threw me off a bit as a reader of the series and also makes the Potter movies' cute-but-true-to-the-book-character Hermione seem better than ever. Especially considering Annabeth is written by Riordan as such a strong character, smart and independent. At least she gets to show off her combat and archery skills as the movie progresses!
Even Grover does not escape unscathed: he is presented as what the Brits in our midst would call randy. (In the books, Percy and Grover sometimes notice girls are cute, but that's about it.) Grover is also a hip-hop caricature; I suppose this is sort of fun, but I'm not sure I'm sold on it. Anyway, movie Grover acts hot-to-trot in Vegas, land of the Lotus Eaters, and even with Hades' wife Persephone, who also gets to be sexy in this film, coming on to Grover in turn. I realize satyrs have a reputation in mythology, but Riordan really didn't go there.
Finally, Logan Lerman, the actor who portrays Percy, looks like a young Chase Crawford. Which is pretty funny, since Gossip Girl's 24-year-old Chase is so young himself that he really shouldn't have a junior clone. But he does. Meet the movie Percy, who, like Annabeth, is fully capable of smoldering stares in the middle of the action.
At best, these touches of sensuality are a little distracting. At worst, they mar what started out as perfectly good middle grade fiction. Again, I have to recommend the Harry Potter movies, which manage to show adolescent crushes in a natural way, as part of the storytelling, i.e., without any panting, lip-parting, or pat sexual innuendos.
Good things about the movie? Well, the depictions of the gods and monsters are terrific. In particular, as the critics are saying, Uma Thurman's Medusa is wonderful. And I really did enjoy seeing this best-selling adventure story retold onscreen. But if you go to the movie theater to watch The Lightning Thief, be prepared for a few surprisingly sultry moments.
Posted by Kate Coombs at 11:28 AM

I've just started the book (about a 100 pages in) and already the previews for the film seem very different from what I'm reading!

Sigh. A six-year old was telling me all about her boyfriend the other day....one of my colleagues had an 11 year old ask for books on how to talk to girls because he felt shy around his girlfriend. I thought the Lightning Thief was hilarious, but didn't feel any strong need to read the rest of the series...I did just buy second copies of all of them and they flew off the shelves!

Jennifer--Ha, scary-good examples! Yeah, I was explaining to my kindergarten student about valentines, telling her we were going to make an art project to show her mother how much she loves her, and she kept wanting to talk about boyfriends.

I read all of the Percy Jackson books, mostly because some of my students really liked them, especially the reluctant reader boys. It's a pretty good series, though not amazing. A lot of kids seem to find these books rowdier or somehow cooler than the Harry Potter books. Maybe it's the swords and arrows instead of wands and wizard robes. Hard to convince guys that those wizard robes are sufficiently manly, I suspect. :)

My 5th grade son is a huge fan of the series and got me hooked. I should have realized from the trailers that we weren't going to get 13-year-old Percy in the movie, but I was disappointed to see the change in character as you mentioned by making him 16. Besides the added sultriness, the change in age gave the characters more mobility (they could now drive themselves instead of taking the bus or hopping the animal transport semi) that gave the movie of a road trip rather than an adventure edge. All told, my son and I enjoyed the movie, but with all the omissions and changes, it didn't have the magic of the book.

Good point about the driving. I'm guessing that the transformation from a middle grade sensibility to a YA one amped up the audience for the film, too. (Marketers and demographics and profits, oh my!)

Besides which, it's hard to make a movie that does a book justice, as we all know--to truly capture that magic. As I said, I was still entertained, just kind of surprised. :)