A Review of The Ever Breath by Julianna Baggott

The first thing that grabbed me about this book was the back jacket flap, wherein I learned that this author is the elusive N.E. Bode, writer of the Anybodies series. Perhaps you already knew that, but it was news to me! And I can see parallels, as the first book in that series, Anybodies, featured a strange old house and an unusual grandmother, too.

The house in The Ever Breath is literally located in the middle of a golf course. Truman and Camille's grandmother ("call me Swelda") explains:

In this idiotic game of balls and clubs and loudly colored pants, the golfers must get from the seventeenth tee box to the seventeenth hole. Here, they have to go around this house... And they don't aim well! So don't be surprised if you wake up in the morning to the sound of golf balls popping off the roof. Louder than acorns, I tell you! I've boarded up the windows. Tired of replacing the glass! Golfers tee off at five a.m. I hope you two are early risers!" 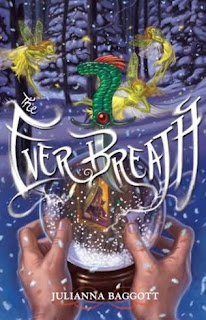 But the golf course ends up being the least bizarre thing about Swelda and her home. Swelda feeds the kids unusual foods—which somehow don't cause an allergic reaction in Truman, who normally suffers from extensive allergies, asthma, motion sickness, you name it. (His sister Camille is extra healthy, in contrast.) During the ceremonial vegetarian meal, which includes seventeen types of tea along with delicacies such as pear noodles and apple-dipped jelly yolks, Swelda tells her grandchildren stories about a parallel world called the Breath World, where magic and magical creatures flourish. The Ever Breath, the talisman that maintains the balance between the two worlds, must never be moved, or both worlds will be in trouble. Although Swelda doesn't tell the kids quite yet, the Ever Breath is in fact missing.

Yep, it's a portal story! That night Truman finds his way into the other world and begins to bumble around trying to fulfill his mission there. Only he doesn't bumble as much as usual, since in the Breath World, Truman no longer needs his glasses or his inhaler. (But Camille does, when she shows up!) The Breath World is being ruled by an overly cheerful government whose motto is explained on a card with one black side and one white side, reading, respectively, "Us versus Them!" and "The difference is simple!" Or as one of Truman's new allies puts it:

Members of the resistance movement, the jarkmen, end up helping Truman, who learns he has a very good reason to take an interest in the head jarkman, a boy about his age.

In a breezy, matter-of-fact tone, Baggott gives us a slew of colorful details such as ruckus tents, locus fairies, prophetic snow globes, and Truman's new sidekick, a cat-like creature named Praddle who can sort of talk. Truman attempts to save the head jarkman and find the missing Ever Breath while avoiding capture; he also hopes to protect Artwhip, since he's seen a dangerous future for the resistance fighter in his snow globe.

Truman thrives in the Breath World, which makes for a kind of instant character evolution. Camille is somewhat less important to the story, although I wonder if that will change in future books. Swelda is a hoot, and I particularly liked a talking mouse named Binderbee Biggby, who has the most interesting crisis of conscience in the whole book.

This is the start of a series, and it's a promising one. I'll admit The Ever Breath gets messagey in spots, and I was a little thrown off during the big fight scene by the author's overt efforts to keep the main villain alive to wreak havoc another day. But Julianna Baggott is a darn good storyteller, and I do recommend the book to young fantasy readers.

Note for Worried Parents: Monsters, peril, and villains, but no sex whatsoever. This is solidly middle grade fiction.
Posted by Kate Coombs at 10:03 PM