A Review of Jack: Secret Circles by F. Paul Wilson

Here's another Book Two, Jack: Secret Circles, which follows Jack: Secret Histories, published in 2008. Both books are essentially prequels to the author's adult series about a man called Repairman Jack. In fact, after I read the first book about a teenage Jack, I went looking for some of the Repairman Jack books. They are quite bleak, a cross between detective fiction and horror. What I like best about them is the idea of the title character. Jack operates off the grid, solving problems that can't be solved by the law. This makes him something of a vigilante, although Wilson gives him a supernatural mythos, defining him as a dark warrior for the Light, AKA an antihero. The most intriguing thing about Repairman Jack is how creatively he solves problems, although his turn-the-tables approach sometimes backfires. 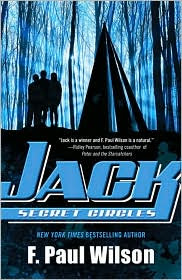 The books about young Jack aren't quite as successful as the adult series, but they still have plenty to recommend them. Jack lives near Jersey's Pine Barrens, where supernatural creatures roam and a secret society steals powerful magical objects. Jack himself is more of a pragmatist in his initial attempts at troubleshooting. His realism balances out the effect of the supernatural components of the story, in fact.

In Secret Circles, Jack tries to help his friend Weezy retrieve a mystical artifact that was taken from her in the first book, clearly by the secretive Lodge, a group led by creepy Mr. Drexler. Weezy is convinced that people like Mr. Drexler also have access to a book she is sure exists, The Secret History of the World. Jack doesn't believe her, but what if she's right?

Meanwhile, the circus is in town, a five-year-old boy is missing, and a monster is roaming the Pine Barrens, where Jack and Weezy discover an ancient stone structure that seems to have been designed as a cage. And when Jack discovers that a respected citizen beats his wife, he tries to make things right, only to find out that some problems aren't easily solved.

Adult writers who switch to writing for teens and children sometimes have trouble with the transition. Wilson's Jack is occasionally too grown-up in his thinking, and the author's pacing reflects the more leisurely adult novel, dragging in spots. Mostly, though, I suspect that Wilson's grand vision of his Secret History of the World books, which he is filling in little by little as outlined in an elaborate chart at the back of this and every book, sometimes lead him to forget to simply settle down and do some storytelling. So the plot's kind of up and down, too.

But I still like these books. F. Paul Wilson has an interesting mind, and Jack is one of speculative fiction's most original characters. For young conspiracy theorists who like some paranormal with their suspense, the YA Jack stories are a creep-worthy read.

Note for Worried Parents: I looked up the target audience on Amazon, and it's ages 9-12. This is another book that I feel has more of a teen/tween sensibility than a middle grade one. The darkest parts of Secret Circles are probably some horror elements (dead bodies) and the wife-beating, though both are presented in a fairly restrained manner. Some parents may be bothered by the author's attempt to show that the wife who is being beaten resents being rescued, but it's really pretty thought-provoking, illuminating Jack's growing awareness that there are a lot of things he doesn't understand about other people's lives. I would recommend a family discussion about this aspect of the plot.
Posted by Kate Coombs at 6:28 PM

Thanks for the head's up about this one, Kate. I've read most of the books about the adult Jack, and also read Secret Histories. Like you, I thought that Secret Histories had some flaws, but I still enjoyed it. I'll check this one out, too.