A Review of Jasper Dash and the Flame-Pits of Delaware by M.T. Anderson

Reviewing Mac Barnett's The Brixton Brothers: The Case of the Case of Mistaken Identity a few weeks ago reminded me that I had yet to read the latest in M.T. Anderson's series of tongue-in-cheek adventure stories, M.T. Anderson's Thrilling Tales, AKA Pals in Peril. (The first two books are Whales on Stilts and The Clue of the Linoleum Lederhosen.) So now I have, and I've got to tell you: I thought M.T. Anderson was giddily over-the-top with the first two books, but he really outdoes himself here.

Which is all the more odd and impressive when you consider that this author is better known for writing award-winning, dark, and dense historical fiction for teens about an African American boy during the American Revolution: The Astonishing Life of Octavian Nothing, Traitor to the Nation, volumes 1 and 2. Not to mention for writing a tough futuristic YA book, Feed, a work notable in part for having some of the best opening lines ever written. 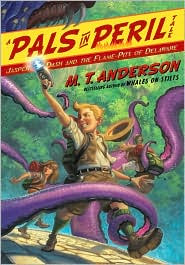 Come to think of it, Anderson is just a whiz at openers. Here is the first sentence of Whales on Stilts:

On Career Day Lily visited her dad's work with him and discovered he worked for a mad scientist who wanted to rule the earth through destruction and desolation.

(Um, she didn't really. In case you were worried.) And then we come to Flame-Pits of Delaware:

When Lily Gefelty got out of bed on the morning of the big game, she looked out the window to see what kind of a day it was going to be. She discovered that it was the kind of day when a million beetles crawl out of the ground and swarm the streets, forecasting evil.

Anderson shows his funny side in this underappreciated series—spoofing and satirizing along at a hundred miles a minute. His three main characters are Lily, an ordinary girl; Katie, star of a series of monster-fighting books called Horror Hollow that were popular just a few years back; and Jasper Dash, star of a series of adventure books for boys published a good sixty years previously and now thoroughly out of print.

Section One of Flame-Pits is subtitled "An Eye for an Eye." It turns out that the top sport at the local high school is staring matches—and we get to hear all about one such match, with Jasper as a top contender against a suspicious team of out-of-towners with eerie eyes and powers. (Jasper and his friends are apparently in high school, but the kids seem more like middle schoolers, and except for the sophistication of the satire, the books read like middle grade fiction, which is also how they're labeled for marketing purposes. Whew!)

Soon Jasper receives a psychic distress call from an old friend, a young monk named Drgnan living in a hidden monastery high in the mountains of Delaware. (Don't worry, Lily and Katie are just as incredulous about hidden monasteries, oppressive governments, and dinosaurs in the mountainous jungles of Delaware as you are, at least until they arrive and see it all for themselves.)

Here's a sample for your reading pleasure, showing Katie spying on the scary parent leader of the scary staring team:

Katie craned her neck. Still she couldn't see whatever it was that lurked in the dark. Luckily, Katie had hidden beside a battered Oldsmobile Delta 88 jammed diagonally in a compact-car parking space with its front tires up on the curb. The Oldsmobile Delta 88 was a car so enormously long that Katie could have slunk down its tawny side with a whole SWAT team gesturing to each other behind her and still have been masterfully concealed. She thanked the stars above for good old-fashioned gas-guzzlers with room for twenty clowns and a hurdy-gurdy and snuck forward in a crouch, her fingertips padding along the car's pockmarked surface.

And Katie is masterfully concealed, spying on the bad guys in their van—right up until her mother comes up the sidewalk and says loudly, "Hey! Katie!...Yoo-hoo, honey! What are you doing crouched over like that?" And then, "Straighten your back, darling! You're beautiful! Is crouched over next to a Delta Eighty-eight the kind of posture they teach at this school?" Whereupon the villains naturally emerge and get a good look at Katie. (Hee hee.)

And then there's Jasper Dash. In this outing, he gets a little blue about not fitting in. More fun from Anderson, since Jasper is so screamingly different from everyone else that the real surprise is that it took him this long to notice! Technonaut Jasper is big on inventions, although his creations are generally bulky and old-fashioned and prone to blowing up at inopportune moments. The mere fact that Anderson casually drops such a character into this series is head-scratchingly brilliant. Watch how Jasper reacts when Katie and Lily stand by him in a difficult situation:

Jasper was clearly moved. "By the squealing fruits of Arcturus, you are the best friends a man could have," he said.

Not every kid is going to get these books, but if your child has a quirky sense of humor, reads voraciously, and likes sci-fi/fantasy and adventure/suspense, give the series a try. Because where else are you going to meet the kangaroo-riding cannibals of Delaware but in Anderson's East Coast jungle?

With cruel shrieks and hooting calls, the cannibals of Delaware dismounted and began to pace toward the three friends. Except for six who, disoriented by all the hopping, paced in the wrong direction, spun in circles, or went to throw up in the bushes. The rest, however, looked menacing. They looked hungry. They dressed in loincloths and terrycloth sweatbands. They were greased, and their hair was long and shaggy like rockers'. In their hands were spears, long forks, chips and salsa, and, cradled in one man's arms, a Cobb salad in Saran Wrap.
Their kangaroos hunkered behind them, waiting for the slaughter. The chief stood on the path right in front of Lily, Jasper, and Katie. He wore a headdress—a busy, brutal confection of pheasant wings, rat skulls, and sequins—and an old barbecue apron that said I'M HERE WITH SCRUMPTIOUS.

As Publishers Weekly said succinctly of Whales on Stilts back in 2005, "Highly wacky."

Note for Worried Parents: Monsters and peril, but it's all very funny. I mean, if you can't joke about cannibals, what can you joke about?
Posted by Kate Coombs at 10:14 PM