A Review of Biblioburro by Jeanette Winter

I live in L.A. and a lot of my students are Latino, so I'm always on the lookout for books that will show them the publishing world knows they're alive. I was pleased to come across this "true story from Columbia," as the subtitle puts it, about a man who rides a burro through the hills to the remote rural villages of his homeland, leading a second burro laden with books—a hay-eating bookmobile! 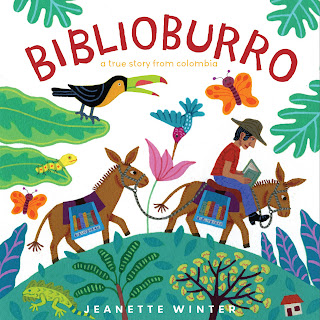 Winter explains in her endnote that Luis Soriano "started with a collection of 70 books that has grown to over 4,800, mostly from donations. Now the Biblioburro travels to the hills every weekend. Three hundred people, more or less, look forward to borrowing the books Luis brings."

Of course, children will be drawn to the main text and Winter's illustrations, whose straightforward, folk art style are particularly well suited to telling about Luis and how he shares his passion for reading. The words of the story are also clean and simple.

Deep in the jungles of Columbia, there lives a man who loves books. His name is Luis.
As soon as he reads one book, he brings home another. Soon the house is filled with books. His wife, Diana, grumbles.

But Luis eventually dreams up an idea for sharing his many books, and the burro-back library begins. The two burros are named Alfa and Beto, just in case you were wondering. The author manages to work in the burros' occasional stubbornness and an adventure with a bandit to show us what Luis's journeys are like. We also see him passing out pig masks, then sharing a familiar story about little pigs with some village children.

Now, hearing about Biblioburro, perhaps you're thinking of a very nice 2008 picture book called That Book Woman, by Heather Henson, with illustrations by David Small. That Book Woman tells the fictional story of the effect on a particular boy's life of one of the WPA's Packhorse Librarians, who rode around the mountains and valleys of the rural United States in the 1930's, carrying books on horseback. Obviously, the two books would make a terrific pairing.

Other picture books about librarians or libraries? A tall tale called Library Lil by Suzanne Williams and Steven Kellogg; Tomás and the Library Lady by Pat Mora and Raul Colón; and the powerful, poignant Richard Wright and the Library Card by William Miller and Gregory Christie are a few I'll recommend. Oh, and how can I forget Jeanette Winter's own The Librarian of Basra: A True Story from Iraq, about saving books during the war in Iraq?

On a related note, The Library by Sarah Stewart and David Small tells about a girl who, like Luis, fills her home with books and eventually decides to share them, though without burros.

There may be a certain amount of didacticism to giving kids books that celebrate books, libraries, and librarians, but somehow, I think not. What these books tell young readers is that books are treasures, and rather than acting like circular arguments, such stories can show the very point they are trying to make by being treasures in the hands of children. The power of story is undeniable, even in a well-told story about the power of story!

As we all know, books have a lot of competition these days when it comes to capturing kids' attention. But maybe hearing about how hard it is for some children to get their hands on a book, and about the trouble someone like Luis will go to in order to make that possible, will help book-rich kids take their story treasures a little more seriously.
Posted by Kate Coombs at 7:15 AM

Thanks for this review. I hadn't heard of this one. Its sound like something I would like. Winter's illus. are always lovely.

I recently read The Tooth Fairy Meets El Raton Perez by Rene Colato Lainez. I loved it. The text and illus work so well together.