A Review of Smells Like Dog by Suzanne Selfors

If you've read Fortune's Magic Farm, you already know that Suzanne Selfors writes weird books—and I mean that in a good way. You get about five pages into some story about a fairly ordinary kid and realize that you're in for another wild ride. 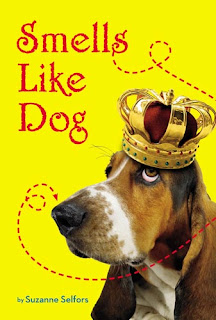 In the case of Smells Like Dog, I was a little surprised by all the talk about treasure hunting, and by the fact that farm boy Homer Pudding's treasure hunter uncle dies and leaves him a beagle plus a gold coin enscribed L.O.S.T., but I didn't fully catch on to the level of whimsy here till the end of Chapter 6, when Homer stares at a small cloud outside his schoolroom window, "And something in the middle of the cloud stared back at Homer." As the next chapter begins dubiously,

A cloud with eyeballs is perfectly acceptable in a fairy tale. And if the reader finds the cloud confusing, he or she can reread the chapter as many times as he or she wants until it makes sense. There might even be a glossary in the back of the book with a definition: Cloud with Eyeballs—A distant cousin to Tree with Ears.
But in the real world, clouds with eyeballs are not supposed to exist. Even Homer, who believed in all sort of things that weren't supposed to exist, like the Lost City of Atlantis and King Arthur's Camelot, felt dumb-founded.

Homer's sensible parents don't want him to be a treasure hunter any more than they want his fiery older sister Gwendolyn to be a taxidermist. But Homer is suspicious about his uncle's death, since getting eaten by a giant tortoise doesn't exactly make sense. After all, tortoises are herbivores. When Homer gets a mysterious invitation to a VIP event at the museum in The City and his father takes away all his treasure hunting supplies and Homer accidentally destroys a rather important piece of his small town, he goes on the lam with his sister and the beagle. Once in The City, they plan to attend the VIP event, but first Homer makes friends with a girl named Lorelei, someone the author hints shouldn't be trusted (as if her name weren't enough of a clue!).

This and other bits of plot, like the meaning of Uncle Drake's greatest treasure, will be apparent to young readers long before Homer figures them out, as Selfors telegraphs the information rather deliberately. Her foreshadowing fits nicely with the chatty tone of the book, however, and I didn't find it a problem.

Smells Like Dog is an adventure story, but the book is so over-the-top that it reads like a fantasy. We eventually get an explanation for the cloud with eyeballs, and for the giant woman Homer meets on the train, and even for the carnivorous tortoise, but it's all fairly unrealistic just the same. Fantastical adventure, maybe?

Selfors sets us up for a sequel in which Homer seeks the lost treasure of the pirate Rumpold Smeller, although this first book is about defeating the evil Madame la Directeur, who works at the museum and is trying to get her hands on the treasure map before anyone else, at all costs.

You have to smile, reading one of Selfor's loopy tales. Smells Like Dog rambles a little, like a beagle following a scent, but I think your kids will be happy to follow Homer and Dog's trail.
Posted by Kate Coombs at 6:33 PM

Hi Kate! Just wanted to say thanks for the reviews, and let you know I gave you an award...

Thanks very much, Charlotte!