A Review of Magic Below Stairs by Caroline Stevermer

I've been looking forward to this one because I'm a fan of Wrede and Stevermer's alternate-England epistolary fantasy novel, Sorcery and Cecilia or The Enchanted Chocolate Pot, not to mention Stevermer's school fantasy, A College of Magics, whose protagonist reminds me of Garth Nix's Sabriel. But I didn't realize I would run across some of the Sorcery and Cecilia characters in this book, which pleased me very much! 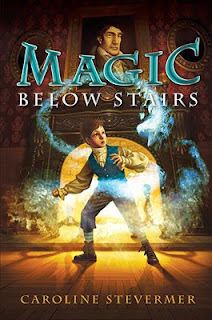 Plucky Frederick Lincoln lives in a dour orphanage, but he gets along better once he is assisted by a brownie named Billy Bly. Of course, Frederick barely glimpses Billy and tends to think he's imagining the whole thing. Having learned handy skills like knife sharpening and knot tying from the orphanage's cook, Frederick is eventually able to snag a coveted job working for the wizard Thomas at Schofield House—mostly because he is suddenly able to fit into the potential employee's uniform. The wizard, of course, is the same Thomas who fell in love with Cecilia's cousin Kate in Sorcery and Cecilia, only now Kate is Lady Schofield.

Still, our story is mostly about Frederick, whose ability to tie a cravat is positively uncanny, so much so that he is eventually promoted out of Lord Schofield's kitchen to become assistant valet.

The thing that most interested Lord Schofield about Frederick was the way he tied his cravat.
"You look remarkably tidy on a daily basis, and I know for a fact you can't have more than two neck cloths to your name. How do you manage it?" Lord Schofield demanded when next they met. "It takes Piers an hour and a dozen neck clothes every morning, and if I'm not to go out looking like a badly made bed, I have to tie the thing myself."
"It's just a knack. Sometimes I have to find a looking glass," Frederick admitted.
Lord Schofield frowned at Frederick's cravat. "There's more to it than a knack. Explain the trick of it to Piers."

Meanwhile, Billy Bly has been caught and banished by Lord Schofield, who thinks brownies are nothing but trouble. Billy finds a loophole and comes sneaking back around the wizard's country home to protect Frederick and the rest of the household from a curse that has supposedly already been removed.

As Lord Schofield suspects, Frederick turns out to have gifts of his own, gifts the wizard plans to cultivate.

The greatest strength of this book is Frederick, who is curious, hard-working, sometimes cranky—much like Lord Schofield, in fact—and courageous. He reads as a very real person, and you'll be happy to see him finding his place in the world.

I did find the plot a tad muddled in regards to the curse, Billy's role, and how the curse is dealt with. (Is it a curse or isn't it? Is Billy making things better or worse?) But I think you'll enjoy this book and will wish, as I did, that it were a lot longer. I suspect we'll see more of young Frederick in future books by Stevermer. I certainly hope so!

Take a look at this review over at Charlotte's library, as well. I think she's right that Magic Below Stairs has a Diana Wynne Jones feel to it.
Posted by Kate Coombs at 5:38 PM

That looks like a fun book --I love the Enchanted Chocolate Pot, I think I will read it again first!