I almost didn't review Little Sister and the Month Brothers because it's a reprint of an old fairy tale picture book and fairy tale picture books aren't doing so well these days, but then I thought, Hmm, that's exactly why I should draw your attention to this well-crafted book by an altogether impressive classic team, Beatrice Schenk de Regniers and Margot Tomes. 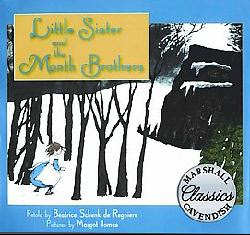 Besides, this is one of the more intriguing fairy tales out there. In a nearly unrecognizable Slavic variation of the Cinderella story, Little Sister lives with her unkind stepsister and stepmother on the edge of a forest. She does all of the work inside and out, with the cruel duo treating her spitefully, besides. "All day long they hollered and they grumbled and they complained." But Little Sister is diligent, kind, and pretty, which drives her stepsister nuts. "What if a young man were to come by? He might choose Little Sister for a wife instead of the stepsister!"

So the stepsister hits on the bright idea of sending Little Sister out into the woods in the middle of winter to pick fresh violets, hoping, of course, that the girl will freeze to death and never return. (She doesn't even have a coat.)

Instead Little Sister walks on and on, then climbs up a huge rock when she sees there is a light at the top. She finds twelve "men" sitting around a fire—actually the twelve months of the year. Little Sister politely asks them if she can warm herself at their fire, and they offer to help her with her problem. As they pass the staff from January to February, then March to April, the ground around them thaws and violets bloom. Little Sister picks violets, thanks the Month Brothers, and hurries home.

Of course, her stepmother and stepsister are astonished. The next day, they send Little Sister out to pick strawberries. When she comes home with the fruit, they interrogate her about where she got them. Duly enlightened, the stepsister dresses herself in warm furs and rushes out to find the Month Brothers herself—but she is so rude that January raises a snowstorm and the stepsister doesn't come home. Neither does the stepmother, who goes out to look for her.

As for Little Sister, she stays home and takes care of the farm, eventually marrying a pleasant young farmer. And the Month Brothers quietly watch over her for the rest of her life.

In one of the more realistic pictures of fairy tale marriage, the author compares Little Sister's life with the farmer to her life with the stepmother and stepsister:

Little Sister was no longer lonely. The farmer was very fond of her, and he helped her with the work.
Sometimes the farmer hollered or grumbled or complained, but not very often.

Schenk de Regniers' text is friendly and well paced, improved by the addition of some voice bubbles—I'm not sure if she added those, or the artist did, or they worked on them together, but I like them. It didn't surprise me to learn that this author wrote for the theater, as the tale has a lightly theatrical feel. Margot Tomes's illustrations are nicely homely, with Little Sister looking like she's ten or eleven compared to the sour grown-ups she lives with. (She looks a tich older near the end of the book; it works!)

For those of you who are tired of reading the same handful of Disnified princessy fairy tales over and over, here's one your child probably hasn't heard before, and I think you'll find that the idea of the Month Brothers is particularly charming.

Note for Worried Parents: The evil stepmother and stepsister go out and apparently freeze to death, but that was exactly what they had in mind for Little Sister. In the world of the fairy tale, justice is served—which actually seems quite right to most young readers. But some of you may want to avoid the story for that reason.
Posted by Kate Coombs at 6:44 AM

Thanks so much for the review! Sounds like a nice mix of Toads and Diamonds as well as Cinderella! While the Barnes & Noble where I work recently created a section just for fairy tales and nursery rhymes (instead of lumping them in with preschool, classics or regular picture books) I am very sad to note the gradual shrinkage of the regular picture book section at my store. We used to have a whole wall dedicated to new picture books, now it is a display for featured sale items... I know times are tough economically which must account for the drop in picture book sales, but owning a picture book can be like having your own little art museum, among other great things. Hope this is just a passing phase and thanks for keeping the focus on these little gems!