A Review of Mockingjay by Suzanne Collins 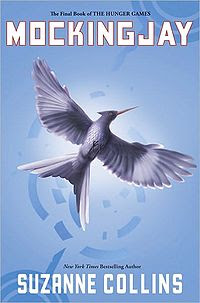 For those of us immersed in the world of children's books, yesterday was a big day: the third and final book in Suzanne Collins's Hunger Games trilogy came out. I bought my copy on the way home from work, then walked into the house and began to read, skipping dinner to finish. I went to bed thinking about Mockingjay, I woke up thinking about it. So no, I won't wait till my regularly scheduled weekend slot to review this book. (Note my lack of spoilers below, which was hard to pull off!)

Just about any other writer, having established the wealthy, hedonistic Capitol led by evil President Snow in oppressing the twelve outlying districts, and having delivered Katniss into the hands of the rebels, would have then presented the rebels' heroic fight against the Capitol forces most heroically, with Katniss as their mascot. And that's—sort of what happens. But this is Suzanne Collins. I am now in awe of Suzanne Collins. Because she immediately proceeds to have the rebel forces, led by Alma Coin, the hardnosed president of supposedly nonexistent District 13, use Katniss in much the same way President Snow used her.

Twice in the last book and once in this book that I can recall, another character comments that Katniss doesn't know the effect she has on people. This may seem a bit too pointed. Furthermore, anyone reading Katniss's account of these events can see her flaws so clearly that they might have trouble understanding the effect Katniss has on others. So just what is that effect?

Mockingjay confirms that Katniss is a folk hero in spite of the efforts of leaders like Snow and now Coin to mold her into a Folk Hero. That's because Katniss believes in things like justice and kindness, values instilled in her by her parents (even her troubled mother, a healer) and by her own struggles to survive equitably in a tough world. Katniss tries to do the right thing no matter how hard it is, driven by her own moral compass even as others work to manipulate her into serving their ends.

Collins never takes the easy road. Katniss has been damaged, and will be damaged again. She suffers from post-traumatic stress syndrome and various physical ailments, more of them as the book goes on. The rebels' work to patch her back together becomes increasingly ironic and symbolic as Katniss, blown about by a detonation of agendas and deliberate attempts by President Snow to destroy her both psychologically and physically, becomes still more stubborn about what truly matters from moment to moment.

The plot twists in Mockingjay are jaw-dropping and satisfying. I'll admit I made the mistake of thinking as I bought the book, Hmm, this one looks smaller. How much can this writer accomplish, and is she going to give her story short shrift? Is she worn out?

The answer is a resounding NO.

Suzanne Collins masterfully offers up both an action-packed, suspenseful dystopian adventure and a symbolic, theme-packed commentary on age-old and contemporary social issues. Most notably, she questions the ethics of war and of our new media's determination to transform dimensional individuals into flat, packaged types for the sake of money and power. This author refuses to glamorize heroism, war, power, or celebrity.

She also refuses to glamorize romance. In Mockingjay, Collins addresses what it means to love someone, bringing up the idea that people change—does that make love more, or less likely? Is loving someone selfish, unselfish, or both? And, paradoxically, does loving someone mean saving them, or killing them? Suzanne Collins is not one for simple answers. Katniss plays out the complexity of human interactions in this book; even her terrible relationship with President Snow takes on unexpected meaning.

All of this comes to us in the form of one increasingly tortured girl's desire to make a good world for the little cluster of people she cares about, a goal that appears more and more unlikely as Mockingjay progresses. Along the way, not all of Katniss's choices may seem wise, but each of them will strike readers as true.

Few authors have used symbols so well in contemporary YA literature: take a look at what Collins does with those mockingjays, or with white roses, and how she turns the idea of a girl "catching fire" thematically and more literally in a contrived entertainment context on its head. Perhaps most notably, watch how the war becomes a new version of the Hunger Games.

Reviewers have commented that Catching Fire managed to be a better book than The Hunger Games, and now Suzanne Collins pulls off the impossible: Mockingjay takes it a step higher, ending this trilogy powerfully, thought provokingly, achingly well.

Note for Worried Parents: All three books are for teens. They include violence, death, much suffering, war, betrayal, torture, and mild references to sex. However, this material is handled gracefully, if painfully, and the Hunger Games books end up being downright inspiring.
Posted by Kate Coombs at 6:18 AM

*sigh* I wasn't wild about Catching Fire, so I wasn't super excited about Mockingjay. But all the reviews of Mockingjay have been so glowingly positive that I am getting sad I don't have a copy. And I broke down and went to B&N to glance at the end to find out what happens,

Jenny--My big confession is that I put off reading The Hunger Games for a really long time because, despite the rave reviews, I was not thrilled about what sounded like Teen Survivor meets Gladiator. I finally read both The Hunger Games and Catching Fire THIS SUMMER; but that set me up nicely to get my hands on Mockingjay. And now I know what all the fuss is about! (This despite the fact that I'm still a big old wuss about dark, post-apocalyptic and otherwise downer YA fiction, so that says a lot.)

I recently peeked at the ending of a book in an adult fantasy series and was so upset by it that I decided not to read the book! So that sneak-peek thing sometimes backfires. OR, maybe it saves you from a disappointing read. :)

I have been scared to read The Hunger Games, but I finally started it this morning because my teenager keeps raving about it (and my husband, who isn't a reader, has been staying up late to read Catching Fire).

I'm so happy to have discovered your blog! You have great reviews and book recommendations. I'm starting a list of must reads from going through your previous posts. So many books, so little time!

I know you said you were going to be spoiler-free, but I still refused to finish reading this until I finally finished the book! I think you and I are on the same mind about it. I'm amazed, catching up on all my spoiler posts today, how many people apparently expected some kind of heroicly grand happy-happy ending, when personally I thought the ending was far happier than I expected it to be! (I was among the everyone-Katniss-ever-loved-EVER will DIE believers). It's about war. It's messy and horrible. It wouldn't be true of it to happen any other way.

RockinL--Oh, absolutely! I thought it was a downright blissful ending, compared to what went on through most of the trilogy. But also believable: you can bet it wouldn't have been like that under "President Coin"! So yes, war, which is kinda the point.

Along those same lines, I've been surprised to come across reviews or comments (e.g., on Amazon) where people complain that Katniss isn't an active enough heroine because she's pushed around so much and spends a lot of time in a hospital room. Well, uh, one of Collins's major themes is that children are at the mercy of governments/adults! All the more so in an authoritarian regime or a time of war, and we've got both here. (Child soldiers, anyone?)

What's interesting is how Katness manages to exert her individuality at all, or influence events as best she can.

Really, I think what's happening with this issue is that people expect one of those cartoon heroes so common in fantasy (and yes, I love them--in other books!). In that kind of story, Katniss wouldn't have trouble healing quickly from a bullet wound, let alone PTSS. And she would fly across the land, saving everyone with a flick of her archery wrist.

Thankfully, Collins wants us to think about what it would really be like. That is, Katniss is almost destroyed by all of this and will really never be exactly okay again.

Because the Hunger Games are HEINOUS, something video gamers, fans of action flicks, and all those of us who experience distant wars on the news in fragments or soundbites may not even notice...

So yeah, I feel grateful we got that much of a happy ending! With Peeta ALIVE. And children, eventually, playing (also realistically) over the graves of the villagers.

Betty--I'm very glad you like the blog. Aren't there a lot of fantastic books out there?

Tabatha--Hope you enjoy it! Or at least have an intense experience; it's one of THOSE books.

Kate, have you seen my reader-response post on the book yet? I noticed that it was kind of ironic that people (who were complaining) wanted Katniss to be the kind of hero THEY were expecting, when that's exactly what everyone in the BOOK was doing to her, too....

I read your post and loved it; left a comment. So nice to talk about this thought-provoking book with thoughtful people!

i think that while the hunger games is AMAZING and catching fire is OKAY, mockingjay sorta sucks. they used a lot of very sloppy plot devices, and of course they killed off prim. prim was the whole reason this whole series started and then she dies anyway?

but what bugs me most is gale's betrayal. gale was her best friend, they had done so much together- and then he just leaves her for a cushy job in 2? and the hijacking makes it so not even the poor deluded milk sops on team peeta can enjoy it!

Player's Life--I'll admit, it was pretty hard to take when Prim died. I think the author is trying to say that WAR sucks. Thanks for sharing your thoughts!