Cybils Shortlists and Other Listy Items

The 2010 Cybils nominees were announced today! In case you weren't aware, these are produced by a panel of Kidlitosphere bloggers who read something like a billion books and then try to balance that famous Newbery "distinguished" literary quality with the concept of strong kid appeal. One of my favorite things about the Cybils is that they include a graphic novel category. This is the 5th year for the Cybils and my first year as a judge. I'll be working on the shortlist for middle grade sci-fi/fantasy books to choose a single winner. Those titles are: 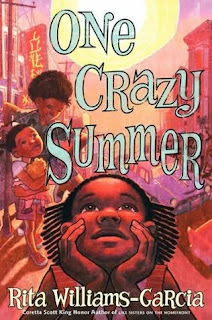 --The Magnificent 12: The Call by Michael Grant
--The Dead Boys by Royce Buckingham
--Dragonbreath: Attack of the Ninja Frogs by Ursula Vernon
--Fever Crumb by Philip Reeve
--Ninth Ward by Jewell Parker Rhodes
--Reckless by Cornelia Funke
--The Books of Elsewhere: The Shadows by Jacqueline West

In other list news, we have Betsy Bird's very fun Golden Fuse Awards for 2010 over at Fuse #8. And at the Heavy Medal Mock Newbery blog, Jonathan Hunt kindly corrals the books that have made some of those key "best of" lists into, well, a list! As in, which books have made more than one such list?
The buzzword for this year's award season is "wild card," which means, "Your guess is as good as mine." It also means that there are a lot of quirky books this time around, the best of them appealing in such different ways that the air is positively scented with apples and oranges.
But the standout title for a Newbery win so far is One Crazy Summer by Rita Williams-Garcia. I would be very surprised if it didn't get at least an honor award, and I would not be at all surprised if it won the coveted crown this year.
P.S. I am absurdly pleased that my Cybils nominee for YA Fiction, Watt Key's Dirt Road Home, made the shortlist! (Here's my review.)
Also: My picks for the Newbery? I'll say One Crazy Summer for the win, then tell you that the Honor books I'd most like to see are A Conspiracy of Kings, The Night Fairy, and Dreamer.
Update on 1-5-10: One Crazy Summer has now won the 2011 Scott O'Dell Award for best children's historical fiction of the past year.
Posted by Kate Coombs at 8:23 PM

I would have such a hard time choosing between all of these books. I would also like to tell you that I so enjoyed your "The Runaway Princess" and "The Runaway Dragon" is on the shelf just waiting to be cracked open!

Thanks, SC! I'm so glad you enjoyed Runaway princess!

And yes, it's hard to choose. I do find that most people are either primarily realistic fiction or primarily sci-fi/fantasy readers. The Newbery goes with realistic fiction about 3/4 of the time, I think. The percent may be higher if you only count the winners, not the honor books.

I'm trying the Cybils challenge and have about eight books waiting for me at the library. We'll see how many I get through before the winners are announced.