A Review of Alien Invasion and Other Inconveniences by Brian Yansky

Ah, a horror-comedy alien invasion book for teens! Just what you wanted to start off the new year, right? The Sanginians are a little goofy here, except for what they do to the humans. Lord Vertenomous and his people conquer Earth in ten seconds flat, saying non-apologetically of the billions they have killed, "I am sorry for your loss." The remaining humans, preserved because of their latent psychic abilities, are referred to as "product" and enslaved. Jesse is one such human, and he is the first-person narrator of Yansky's cheerfully odd new story. 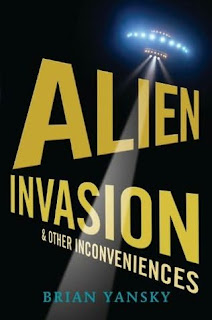 Jesse is sitting in history class one day when everyone in the room but him "falls asleep." Jesse hears a message inside his head informing him that his planet has been conquered by "the greatest beings in the known universe" and that it only took ten seconds. His first thought upon hearing the voice is that he's losing his mind.

The world is conquered in ten seconds? Come on. Also, the voice itself isn't particularly scary. Not like the breathy, booming voice of, say, Darth Vader. It's more of a whisper and a little squeaky around the edges. In fact, I'm kind of disappointed that the imagination of my damaged mind couldn't do better. But then I notice what I've been too freaked out to notice before. No one is moving. Every single person, including Mrs. Whitehead, looks sound asleep. I feel a shadow over me then, and it practically knocks me off my feet. I struggle to breathe. I force deep breaths. Then I do what you do when people are sleeping at a totally inappropriate time and in a totally inappropriate place. I try to wake them. I shake Carlee Thorton, who is the best student in school and would never, ever fall asleep in class. I punch Jackson on the arm.
"Jackson, dude, it's me, Jess. Wake up," I plead. He doesn't....
I try my cell but it's dead. I go out into the hall and try some good old-fashioned screaming. No one screams back.
I'm all alone.
It's so quiet.

As the story progresses, Jesse is taken to work in Lord Vert's compound, where he cautiously makes a few friends among the other slaves and finds his own psychic powers growing to the point that he starts hearing another human's mental voice in his dreams. As Jesse loses some of his fear of his captors, he begins to plan an escape. The action ratchets up from there, as Jesse and a few companions do get away and the aliens use their technology to try to hunt down the missing product.

Yansky does some interesting things with the idea of colonialism that should bring to mind what European nations did in places like Africa and Southeast Asia in the nineteenth century. That is, in Sanginian society, sentience is measured on the basis of psychic ability. Anyone lacking that ability is considered an animal and can be killed without compunction. But when Lord Vert's people recruit human servants with a little psychic ability, their interactions prompt that ability to blossom. This means that a planet full of humans with negligible sentience is becoming a place with signs of greater sentience. The answer to Lord Vert's dilemma is, of course, to create a cover-up so that product-rights activists back on his home planet won't take up the cause of the humans on Earth. (Compare his decision to limit the evidence of psychic skills to the efforts of colonial Europeans to prevent native peoples from learning to read and write, which might indicate that they were as intelligent as their conquerors.)

We get the Sanginian point of view from Lord Vert's correspondence, mostly with his politically powerful and intimidating father. Because Vert is comically afraid of his father and of making bureaucratic screw-ups, it's easy to forget that Vert is himself very powerful, has personally committed genocide on a scale of billions, and uses the humans as slaves, including sexual slavery. If you take the time to think about it, this juxtaposition is a little jarring. But Yansky's point is a good one: we tend to imagine alien invaders as soulless monster-machines. Yet isn't there something even more terrifying about a rather ordinary personality with such power over others? A guy like Lord Vert, who happily justifies doing horrible things and then worries about what's for dinner?

The human point of view in Yansky's book is also poignant, as people who thought they were pretty independent and relevant are suddenly treated like animals. (Again, slavery and colonialism would have felt like that. Or the way Jews were treated by the Nazis.) As Jesse tells a fellow slave, a girl he's starting to like, "We matter." And she asks, "Why?"

Alien Invasion and Other Inconveniences is fast-paced, often funny, and deeper than it seems at first glance, when it appears to be just another action-adventure tale. The book ends with a little group of human rebels in place as Jesse's powers take a surprising turn, clearly setting us up for a sequel. I hope that Brian Yansky can sustain his clever balance of humor, suspense, and even philosophy in the second book.

Note for Worried Parents: This isn't exactly a happy scenario, and Lord Vert has taken one human character as a concubine, a fact that, while it is never exploited, is quite clear (as well as necessary to the plot). A book for teens.
Posted by Kate Coombs at 11:56 AM

I saw Yansky on a panel at the Texas Book Festival and bought the book there for him to sign. I haven't read it yet. Thank you so much for this review. You've reminded me to fish it out of the pile.

Camille--I'll bet he was fun to listen to! Enjoy.