A Review of Cloaked by Alex Flinn

I haven't read Flinn's second fairy tale retelling, A Kiss in Time, but I did read Beastly, which is about to come out in movie form. That one had such a fun premise, making the Beauty and the Beast prince a spoiled contemporary rich boy. Cloaked, on the other hand, is more of a fairy tale mash-up, with plot points borrowed from The Elves and the Shoemaker, The Frog Prince, The Six Swans, The Golden Bird, The Valiant Tailor, The Salad, and The Fisherman and His Wife. (A handy author's note explains all this!) 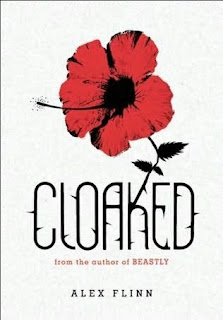 Our hero is a boy named Johnny who lives in Miami and works in a shoe repair shop inside a fancy hotel. Like his good friend Meg, he's part of a family business that's barely making ends meet. Unlike Meg, he's interested in seeing the genuine princess who's coming to stay in the hotel.

Victoriana is a gorgeous party girl with a sort of French-sounding accent and all the money in the world, so why would she take the least bit of interest in Johnny? Well, she wants his help. Apparently her brother has been turned into a frog by a wicked witch, and he was last seen heading for Florida. But Victoriana's political enemies are keeping a close watch on her, trying to force her to marry a prince from a rival kingdom, and she can't continue the search herself. She needs a nice, ordinary boy with a heart of gold. She needs a hero! (Cue old song from Footloose soundtrack...)

Oh, and the princess offers to pay Johnny. And even marry him! Since he and his mom are not doing at all well financially, he agrees. But he hides what he's doing from his friend Meg, since she'll think he's nuts if she finds out he believes in fairy tale curses.

Using a magic traveling cloak, part of the equipment Victoriana gives him, Johnny hits the road. He is more or less assisted by six swans and a fox, all of whom used to be human. A lot of funny dialogue from sarcastic enchanted animals ensues, after which the bad guys start chasing Johnny.

Eventually Meg does get in on the action, which is just as well. She seems a lot more savvy than sweet Johnny!

I had a little trouble buying this one for some reason. It's a fairly busy book, and I didn't find all of the subplots convincing. For example, a subplot about Johnny's desire to be a premier shoe designer didn't quite work for me, though I'll admit it's a clever idea. And there's a subplot involving Johnny's father, and one about Meg's secrets. Plus we have those swans to deal with, along with a couple of giants in the Everglades and some mixed-up romance.

The fact that Meg likes Johnny (and he likes her back but hasn't figured it out) is telegraphed from miles away. It's sort of amazing that the boy doesn't get a clue a whole lot sooner. Then again, Johnny is easily snowed by a villainess posing as a hot girl, so his blind spot about girls' intentions is apparently a character trait.

At any rate, Cloaked is an exuberant story, and kids who like fairy tale retellings will probably get a kick out of it. Like Beastly, it has a male protagonist, which is also nice. Pick it up and see what you think!

Note for Worried Parents: This is a book for teens, but it doesn't have anything particularly objectionable in it. A little kissing and some mild teen boy conversations about wanting to connect with beautiful girls in bikinis; that's about it.
Posted by Kate Coombs at 9:55 PM

I'm reading Cloaked right now and am almost done! on chapter 38! This book review was very helpful for the homework I have tonight lol.. thank you so much!