A Review of The Big Crunch by Pete Hautman

I've seen this one recommended by a couple of bloggers and was intrigued by the idea of an "ordinary" high school romance. As the jacket flap puts it, "Jen and Wes do not 'meet cute.' They do not fall in love at first sight. They do not swoon with scorching desire. They do not believe that they are instant soul mates destined to be together forever. THIS IS NOT THAT KIND OF LOVE STORY." 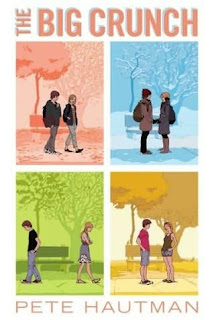 Except—it is. But first I'll just mention that at least in this printing, someone screwed up: Throughout the actual book, the girl's name is not Jen, it's June, whereas she's called Jen for the entire flap copy. Thankfully, the boy is in fact named Wes on both the flap and in the book itself. Now...

1. The "meet cute" doesn't happen when Wes and June first meet; it takes place later, when they crash into each other during a late-night run to a convenience store and June's glasses are broken, giving her a black eye (hence the heavy makeup in the excerpt below).

2. I acknowledge that they don't fall in love at first sight. However, when they do make out, I would argue that they "swoon with scorching desire." Here Wes simply touches her face:

June nodded. She was having trouble breathing. His hand reached out and touched her cheek, a touch as soft as a breeze. She became acutely aware of her body, of every square centimeter of her skin, of the sound of air molecules striking her eardrums...
[This is Wes a few sentences later.] What was it about this girl, this fish girl with her fake aqua eyes too far apart and that thick layer of makeup? Wes could feel the pressure building in his throat, his chest, in his
groin, as if he was about to explode. Spontaneous Human Combustion. He had never felt this way around Izzy. His fingers still tingled where he had touched her cheek.

3. And if they don't feel like they're soul mates, why do they both pine so when this Romeo and Juliet are separated, to the point where Wes borrows a car (illegally, as it turns out) and drives all night to see her, feeling, well—driven?

Still, all evidence to the contrary, very late in the book June points out that they might break up at any time, and then their relationship will just become a nice memory. (Thanks for that, June! We were trying not to think about it!)

All this may sound like I didn't like this book, but you know what? I did like it. Very much! Because one thing the jacket flap gets right is that June and Wes seem like real people, which is the true strength of Hautman's book.

As a bonus, I love the cover; don't you? You will also find the artwork showing Wes and June in each of the four seasons used as section breaks inside the book (in black and white).

The Big Crunch is a leisurely examination of how two people slowly get to know each other, become attracted, and deal with creating a role for the new relationship in their less-than-cooperative lives. The random thoughts they have along the way are one of the things that make this book feel so real. That's where the "ordinary" factor comes in, giving the book a nice sauntering pace, a satisfying unfolding feeling. (Oh, and in case you were wondering what the title refers to, the "Big Crunch" is apparently the opposite of the universe's Big Bang. I know you can see the symbolism there!)

The villain of the piece, if there is one, would be June's dad, who moves his family randomly and frequently because of his work. It's especially funny seeing June's father, a motivational speaker, through Wes's eyes. June becomes a tiny bit more sympathetic toward her mother during the course of the book, or rather, more aware of her mother as a person with problems of her own. Her dad does show a touch of compassion at one point, which is nice.

A side plot about Wes's friend Jerry, who wants to be class president and whom June ends up dating more out of guilt than anything else, is fun because the guy is such a weirdly fresh character. Hautman's humor is one of the best things about this book. For example, when June and her friend Phoebe are watching Phoebe's crush in track practice, Phoebe yells "Go, Josh!" right as he jumps a hurdle, causing him to wipe out. Josh is angry, but as Phoebe later explains to June, "We made up. I just had to promise not to yell his name at any track meets." Subtle, perhaps, but funny. Plus it reflects the author's theme that young love is a bumpy road, every time.

Bottom line: I really enjoyed getting to know Wes and June and watching them flail around trying to figure out their relationship. I think you will, too!

Note for Worried Parents: This is a book for teens. There's some teen drinking with the requisite vomiting afterwards and the use of words like "bitch." No actual sex, but characters ponder the possibility.
Posted by Kate Coombs at 11:17 AM