I was trying to think of the right word to describe this book, and the list I came up with began with "gleeful" and went on to "playful," "giddy," "whimsical," and "a rambunctious romp." Which should begin to give you an idea about The Rise and Fall of Mount Majestic. Or, as Ingrid Law puts it in a cover blurb, "Magical! A buoyant, lively debut." Here's a sample, moments after we've been introduced to our heroine, Persimmony Smudge: 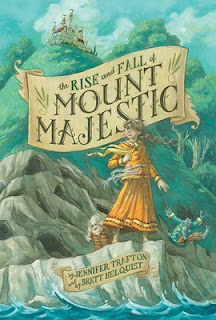 But then her hat had blown away, and with it all her heroism. It was a large-brimmed blue hat with embroidered fruit all over it. It looked more like a drowning apple tree than a hat, but she loved it. Usually she felt invisible—a poor girl with worn-out clothes, a forgettable face, and hair that was neither golden yellow nor chocolate brown nor fiery red, but rather like dirty dishwater. People didn't notice her, but they noticed her hat. It made her feel less Smudge-like.

Persimmony is one of a cast of colorful characters, including a guy named Worvil who has made worrying into an art form, a Rumblebump court jester named Guafnoggle, an army captain who's far more interested in poetry than fighting, a potter who makes pots that give people what they need most (not what they want!), and an amazingly bratty king who's about ten years old and likes making up words his teacher, Professor Quibble, will fuss about. King Lucas the Lofty is such a huge fan of pepper that he eats it with everything, and the island's pepper mill has become an oppressive place in its endless attempts to please the small monarch's palate.

After Persimmony breaks one of Theodore's magic pots and gets lost in the forest, she eavesdrops on the Leafeaters, a group of elf-like people obsessed with politeness. They live under the forest, where they complain about the humans. Most people don't go in the forest at all because of the poison-tongued jumping tortoises, which live in the trees and are really vicious. And the Rumblebumps choose their Grand Stomper using an orange starfish, and there's a mutiny at the pepper mill, and Worvil goes to the Snoring Cave and actually sees the giant's face, and Leafeaters Rhedgrave and Rheuben have been put in the stocks, while Persimmony winds up in the soup...

Uh—there's a lot to keep track of here. But it's all very fun, so just go with the flow! The most important plot point, which I don't mind spoiling since it's spelled out on the flap copy, is that Persimmony lives on an island with a mountain in the middle, and it turns out there's a giant sleeping beneath the surface of the earth. He's the reason Mount Majestic rises and falls daily, carrying Lucas's palace with it. When Lucas has somebody dig for gold in the dungeons, following the advice of a magical lyre, they do find gold, but are able to identify it as an enormous belt buckle.

Meanwhile, the Leafeaters are digging, too, down at the foot end of things, and someone should probably stop them before the unthinkable happens and the giant wakes up.

The author has a good time with her decidedly wacky premise. The tone of this one reminds me a little of some of my favorite older fantasies, such as Carol Kendall's The Gammage Cup and The Whisper of Glocken or Natalie Babbitt's The Search for Delicious.

The Rise and Fall of Mount Majestic is such a cheery, frolicsome book! Its antics are complemented by illustrations from Brett Helquist, whose name you might recognize. He's the artist who brought Lemony Snicket's A Series of Unfortunate Events to life. The book jacket is especially nice, and I like the deckle page edges, as well.

We get a few messages tucked in here and there—things like "Don't be a selfish brat unless you want to be really lonely" and "Who knows what the future may bring, so enjoy the moment." Every so often this book feels frenetic, and you may find yourself wishing for a quiet interlude... Fortunately, there are a couple of those, too. Come along with Persimmony as she exercises more common sense and courage than just about anyone else on her island, trying very hard to keep the giant under the ground from waking up.
Posted by Kate Coombs at 10:28 AM

You've really found some good ones! This is going into my phone. That's my new plan--instead of keeping a paper list or a word doc, I'll enter it into the notes in my phone, that way I'll have it with me when I find myself at the bookstore or library.

I was wondering if I wanted to read this one--thanks for letting me know that I do!

I haven't heard of this one before, but will certainly add it to my "to be read" list right now. Sounds like it might make a great read-aloud. thanks for telling us about it!

Ruth--Good idea! I really need to get a better cell phone...

Charlotte and Karen--Yes, it's a lot of fun and very much middle grade! I think 3rd graders would especially like it.