A Review of Manners Mash-up by a Bunch of People

Perhaps you've seen Why Did the Chicken Cross the Road? or Knock, Knock! by a team of terrific children's book illustrators, in which each artist presents a different take on the same theme. Now you can head to the library or bookstore in seach of the latest in this innovative series—Manners Mash-Up: A Goofy Guide to Good Behavior. This is definitely my favorite of the three, worthy of taking its place on the shelf next to such helpful manners books as Sesyle Joslin and Maurice Sendak's classic What Do You Say, Dear? and What Do You Do, Dear? 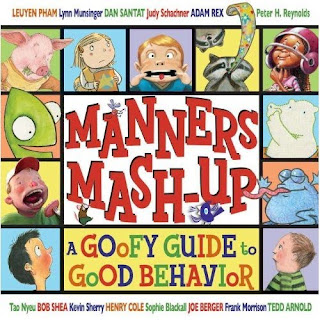 What's really great about this book—and the reason kids will like it—is that it mostly shows what not to do, though the written rules explain what should be done. That makes Manners Mash-up an outrageous demo of over-the-top behavior, as illustrated with great gusto by a top-flight array of illustrators. Each one addresses manners in a particular setting, starting with the school bus. I'll give you one or two of my favorite rules and illustrations from each spread.

—Bob Shea, "Bus Manners": Here the animals match the rule-breaking, as the bear demonstrates the opposite of "Don't soak your seatmate with sleep drool," the skunk shows "Say 'excuse me' when you make a smell," and the giraffe doesn't do too well at "Try to keep your head in the bus," for example. The one about the driver is the best, also the most out there, but I'll leave you to discover that one for yourself.

—Lynn Munsinger, "Cafeteria Manners": Featuring a darling cast of pigs, this spread shows us how not to break rules like "No food fights" and "Don't take all the desserts."

—Henry Cole, "Don't Stare At": This one is going to please the bathroom humor crowd. It takes place in the main office of a school (with human characters), and includes several key things that should not be stared at, such as "Funny Outfits" and "Gross Things on People's Faces."

—Leuyen Pham, "Playground Manners:" More animals! The chimps are throwing sand in the sandbox and a groundhog is hogging the ball, but there are some sweet ones, too, among them "Always watch out for little ones" and "Give friends a boost."

—Peter H. Reynolds, "Classroom Manners": We're back to human children with Reynolds, who has the kids demonstrating positive rules with dialogue in voice bubbles. For example, beneath "Ask nicely" a girl says, "May I borrow the purple crayon, please?" (surely an allusion to Harold), while beneath "Share," the boy sitting next to her replies, "My pleasure, Holly! I have an extra one. Keep that one!"

—Tedd Arnold, "Good Sports": Probably my favorite, but then, I'm a sci-fi/fantasy buff. Here we get to see "The All-Alien Slimeball Championship" on some moon or planet... There are only four rules, and each is illustrated by a little three-panel cartoon strip. Though the rules are ordinary, the way they play out is not. For instance, when one alien throws a slimeball, another eats it with a GULP and the coach says, "Eating the slime ball is against the rules. You're benched!"

—Adam Rex, "Table Manners": The author-illustrator of Frankenstein Makes a Sandwich gives us a mad scientist attempting to have a nice, civil dinner with Igor and a three-headed boy he apparently created in his lab. (The good doctor looks like John Waters, if you ask me.) When the mad scientist says, "And chew with your mouths closed—were you raised in a barn?" the reply is quite literal. And what possible response is there to this instruction? "Igor—don't slouch."

—Judy Schachner, "Party Manners": At first glance, Schachner's style doesn't seem to lend itself to poop jokes, but they're there... She can't resist playing with the idea of party poopers! And then we get a girl carrying an alligator I'm not entirely sure is stuffed, plus a raccoon in a party hat hanging upside down from a tree. Favorite rule? "Whack the piñata. Not your friend."

—Frank Morrison, "Be a Good Visitor": So far, the cast of characters has been nicely diverse, and now we get a living room gathering that consists mostly of African Americans. "Help out if you're asked" is a great idea, though "Don't play ball in the house" provides a more striking visual. I like the way the adults in this one look like they're at their wit's end over the kids' antics.

—Sophie Blackall, "Good Behavior at the Doctor's Office": Sophie gets a little surreal with rules like "Prosthetic legs aren't toys." Watch out for the lady whose head is no longer attached and the child commandeering the receptionist's telephone, not to mention the doctor's name.

—Dan Santat, "Proper Behavior at the Theater": Each rule at this opera performance has its own "do not" icon. You can imagine the one accompanying this admonishment: "Please don't pick your nose and leave the boogers under the seat. That spot is saved for old chewed gum wads only. Yummy! Yummy!"

—Joe Berger, "Supermarket No-No's": "Don't eat all the free samples" shares shelf space with "Always take cans from the top of the stack" and, best of all, a warning about the produce section.

—Kevin Sherry, "Pool Rules": These rules are pretty typical, but I like the artwork, especially the inclusion of a giant octopus who is just hanging out near the shallow end for some reason. Plus there's a nice big sign on top of the bathroom advising kids not to pee in the pool.

—Tao Nyeu, "Please Don't Pick in Public": Yeah, this one's all about what not to pick! But the most astonishing thing about Nyeu's spread is that it's done in needlework. Which means that, not only is it darling, but a supposedly staid medium is used to show some decidedly unstaid activities. All animals again; I think my favorite is the crocodile picking his scabs, with a mouse saying, "Ew."

The last spread is a satisfying finale, giving us a small self-portrait or photo of each illustrator with the answer to this question: "What was your goofiest manners mishap?" Peter Reynolds's is a little off-topic and Bob Shea's is just plain weird (though kinda funny); the rest are pretty amusing. For some reason, I especially like the image of a two-year-old Dan Santat throwing chicken bones at the other diners in a restaurant.

So there you have it—a detailed modeling of mostly bad manners which should nevertheless provide fodder for a classroom or family discussion of good manners. What exactly does it mean to be polite? Why do we have rules like that in the first place? And hey, just what's wrong with asking total strangers why they're fat? (You should probably get your finger out of your nose and say "excuse me" before you answer these questions.)
Posted by Kate Coombs at 6:40 PM