A Review of Ribbit Rabbit by Candace Ryan and Mike Lowery

I met Candace Ryan at an SCBWI Conference in Los Angeles a few years ago, and every once in a while we get together to talk shop. A couple of weeks ago I attended her book launch for Ribbit Rabbit at Once Upon a Time in Montrose, California. (Cool children's bookstore—I want to go back!) 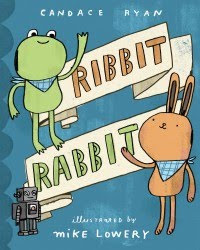 You should understand that Candace has a gift that makes for a particularly intriguing type of picture book—she's a master of wordplay. I'm guessing she's good at Scrabble, too!

In Ribbit Rabbit, Candace uses a mere smattering of words to create an entire plot about two friends and their interactions. Here's how the story begins:

They go swimming together.
Ribbit Rabbit.
Dip it, dab it.

Amazingly, all of the pair's activities, including a quarrel-and-making up scenario, are then chronicled using the same rhyme pattern. I think my favorite phrase is what is said when they eat peanut butter sandwiches. And there's a whole subplot about a robot toy which leads to a couple of new sounds on the very last page...

Illustrator Mike Lowery has a refreshing new illustrative style that plays particularly well in this book made up entirely of non-white pages of various hues. The predominant colors are beige, blue, green, and a brown-orange shade. A gray background is used only once, when the friends have quarreled.

Lowery's figures are drawn quite simply, but their facial expressions manage to say a great deal, e.g., when Bunny is shown wrapping something, his brows furrowed and his little tongue sticking out with concentration. (Note the child awareness there: a grown-up wouldn't sweat over the task of wrapping a gift, but it's a pretty challenging activity for a little kid.)

I like the way Frog and Bunny engage in imaginative play, the kinds of things they fight over, and the earnest way they make up. The few sentences given in addition to the rhymed phrases are thoughtfully selected. The author has a particularly good way of explaining what happens when two friends quarrel—how fighting can start out small and grow bigger. "Until every BIG and little thing makes them fight." Then after Frog and Bunny have quarreled, we are told, "And they find themselves all alone." Accompanied by a rather poignant spread showing each one on one side of the page, separated by a tall pile of toys, fiddling with two pieces of the toy they have pulled apart. This theme has been covered in dozens of picture books, but there's something especially sensitive about how it is handled in this book.

So, while lots of people out there are rhyming, few of them are creating stories quite as complex and emotionally satisfying as Ribbit Rabbit. It makes me smile to think that Candace's rather sophisticated wordplay is put through its paces in the seemingly humble context of a book for small children. The teacher in me says that little kids will not only like the sounds of this book and the way its story unfolds, they will also broaden their unconscious awareness about the possibilities of language.
Posted by Kate Coombs at 6:35 PM