A Review of The False Princess by Eilis O'Neal

This book reminded me a little of Palace of Mirrors by Margaret Peterson Haddix, which also deals with the idea of decoy princesses. Here we meet Princess Nalia the day after she turns sixteen, when she learns that, despite her upbringing and training, she is not really a princess, let alone the heir to the throne of Thorvaldor. Because of a dire prophecy, she has been merely a placeholder until the real Nalia can be brought to the palace. 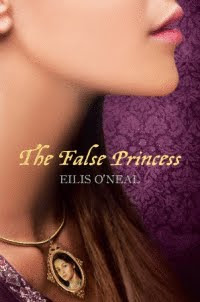 The king and queen scarcely do right by Nalia, now known by her birth name of Sinda. They send her to live with her aunt, who turns out to be a dyer in a small village. Sinda's aunt can hardly stand her, and that's even before Sinda turns out to be inept at the smallest task involved in creating dyes. Aunt Varil's hostility is only one of the reasons Sinda suffers in her new life: she misses her best friend, a young aristocrat named Kiernan. But she is so miserable about her suddenly-low status that when he comes looking for her, she turns him away with harsh words.

For a time it seems that Sinda will be comforted by a village boy named Tyr. Ultimately, however, what changes is that Sinda learns she has magical ability. She returns to the capital, hoping to study in the college of wizards. Instead she winds up working as a scribe/apprentice to an eccentric magic-maker named Philantha. In time Sinda reconnects with Kiernan and even meets her replacement. In doing so, she discovers a conspiracy so convoluted that it will require the help of her friends as well as her own efforts to untangle all the skeins. Along the way, her peril grows greater, as does the danger to everyone else involved—until the day comes when she must face the entire court and tell the truth without losing her life.

This is a good story, a sort of fairy tale for teens. It's interesting to see an inversion of that childhood fantasy, "Am I really a misplaced princess, adopted by these commoners?" Looked at the other way round, the question seems especially pertinent for teens, who worry, "Am I really anything special?" By the time this story is over, Sinda has made a new place for herself in the world, though not one she would have anticipated a few years or even a week or so earlier, when she was struggling to get along with her resentful aunt. In fact, she plays at least five distinct roles in The False Princess, reminding me a little of the way young adults change their college majors, let alone their life plans. I doubt this is what the author specifically had in mind, but I do think the book is well suited to representing the kind of transitional uncertainty often felt by, say, sixteen- to twenty-three-year-olds.

Because Sinda is pretty unhappy for large chunks of the book, she is sometimes a bit depressing to hang around with; however, she guts it out, and that makes her rather appealing. Here's Sinda arriving at her aunt's cottage:

My aunt was a tall, thin woman with an angular set to her bones. Her hair was light brown, with strands of gray running through it, and her nose was long and sharp. I didn't see much of myself in her. We studied each other for a moment, and then she exhaled a puff of breath through her nose.
"You look like her," she said. "Your mother."
In my mind, I saw the queen, who was all softness and grace, whereas I had always been small and dark.
As if she could see my thought, my aunt pursed her lips. "I mean your real mother." It was a dry voice; it reminded me of reeds clacking together.
"I hope..." I licked my lips to wet them. "I hope that I have not inconvenienced you too much. It seems that you are my only living relative, and they could not think where else to send me."
My aunt looked at me for a long time, then barked at the footman, "Bring her things in, if she has any." Then, to me: "Well, you might as well come inside, too."
She turned, the light from the lantern suddenly hidden behind her body, and I followed, wanting whatever scrap of brightness I could find to push back the dark.

Solving the mystery behind Sinda's role as a substitute princess takes us in various surprising directions, some of them more fast-paced than others. (The part about researching the prophecy dragged a little for me.) In general, one of the best things about this book is the plot twists, but I also enjoyed Sinda's friendship with Kiernan, which is obviously heading toward something more. Though I wasn't completely surprised to see it, I was still pleased to note that Sinda's change in station had absolutely no affect on Kiernan's loyalty and affection.

In addition, I was intrigued by Sinda's relationship with her adoptive mother, the queen, who must give Sinda up without looking back after raising her for sixteen years. The glimpses O'Neal chooses to show us of the queen's feelings are poignant, all the more so because the queen tries so hard to keep her struggles in this regard to herself. There's some nice character work in The False Princess, alongside pleasing dollops of magic, adventure, and romance.

Note for Worried Parents: You'll find a little oblique talk about sex and some kissing at one point in this book for teens.

A lot of bloggers have weighed in on this one. Here's a review at Charlotte's Library that provides links to a few other reviews.
Posted by Kate Coombs at 10:20 AM

I've been wanting to read this but am waiting for my library to get a copy. I'm glad you mentioned the queen in this review. Since the reviews for this have been popping up, this is the one aspect I've been most curious about.

Brandy--I would almost have liked to see a bit more about the queen, but I realize she's pretty much a side note to the larger plot. Hope you can get a copy soon!