A Review of Enclave by Ann Aguirre

I'm pretty sure I'm not the first nor will be the last to compare this book to The Hunger Games: tough teenage girl who's a warrior, dark dystopian setting, a race for survival. But believe it or not, Deuce's world is worse than Katniss's. I compare them simply to give you some idea about the book's general tone and level of violence. Really, Aguirre has built her own world here, and it makes the one with those 12 (or 13) districts and televised death matches look downright cheery. 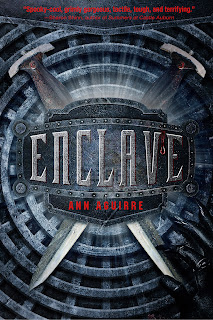 Here the death matches are every day. Deuce is part of a mostly primitive tribe inhabiting the subway tunnels in a post-apocalyptic New York City. She and her bunch are pretty brutal, exiling or killing off anyone who breaks the rules, but they are menaced by worse terrors—the cannibalistic mutants they call Freaks. (These have a whiff of zombie about them, if you're trying to picture it.)

Deuce has survived to the age of 15, so she is marked with fire and given a name instead of a number. She is proud of her training as a Huntress (vs. a Builder or Breeder), but she is dismayed to be assigned to a partner who came to the tribe as an outsider and has managed to survive in their culture. Fade isn't necessarily one for obeying the rules, which means he could get Deuce killed by the tribal leaders. Sent on a suicide mission, the two manage to survive, but when they return with a warning about the Freaks, their leaders won't listen.

Deuce and Fade end up in exile, where they are nearly killed by the Freaks. Then Fade leads Deuce to the surface of the city, a place she has never dreamed of going. They run into trouble with a local gang and with the Freaks who live on the surface. Barely escaping death yet again, they acquire a hardhearted companion and flee the city altogether, unsure where they will wind up, assuming they continue to stay alive.

Yes, there's a sort of love triangle. Deuce and Fade grow close, but their closeness is threatened by the thuggish Stalker. As tough as she is, Deuce is somewhat drawn to Stalker, who is more like her. But she likes Fade partly because he is more compassionate and civilized than she is (though nevertheless a fighter). This plot thread is left hanging at the end of the book.

Deuce's world is an ugly one, but it's heartening to watch her survive and grow and even (sort of) escape to a place that is a bit less vicious—though the Freaks continue to threaten those who are more human even as the book ends. We are definitely heading toward a sequel here!

I've read some of Aguirre's adult sci-fi, and she just keeps getting better. This book is well crafted, from its world building to its character building. Aguirre moves easily between action and emotion, giving Enclave a better balance than some books of this sort. Here's Deuce heading out on her first real hunt:

Beyond the light of the enclave, it was dark, darker than I'd ever seen. It took my eyes long moments to adjust. Fade waited while I made the shift.

"We hunt like this?" Nobody ever told me. Primitive fear scuttled up my spine.

"Light attracts Freaks. We don't want them to see us first."

Reflexively, I checked my weapons as if mentioning the monsters could bring them slavering out of the murk. My club slid free cleanly. I put it back. Likewise, my knives found my palms in a smooth motion.

As we moved, my other senses compensated. I had done visual deprivation as part of my training, but I hadn't understood just how much I would need that skill out here. Now I was glad I could hear him moving ahead of me because I could make out only vague shadows. No wonder Hunters died.

So yes, if you liked The Hunger Games, or Incarceron or The Forest of Hands and Teeth, for that matter, add this to your list of creepy-cool dystopian books!

Note for Worried Parents: Enclave is an intense book for teens and includes graphic violence, horror, and the threat of rape, plus mature themes simply in the way Deuce's grim little society functions.

Also: Click here to watch the book trailer. (Not sure I care much for the casting of Fade. I'm thinking the boy should look a lot less like a friendly spaniel. Oh well!)

Please note that this book was provided to me as an ARC by the publisher.