A Review of Squish by Jennifer L. Holm and Matthew Holm

I am a big fan of this duo's Babymouse books, which are a great pick for reluctant girl readers and girls in general ages 8-11. So I've been looking forward to the launch of their new Super Amoeba graphic novel series. Of course, how in the heck do you turn a one-celled organism into an appealing hero? The dynamic Holm siblings show us how it's done: give your amoeba a great name and pop a baseball hat on him. (At first glance, the hat logo appears to be a simple smiley face; a closer look shows the hat's expression changing depending on the action—a nice little in-joke.)

Of course, every as 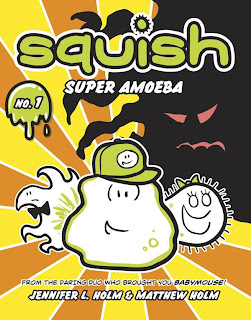 piring superhero and plain old kid needs sidekicks: Squish's best friend is a "guy" named Pod. When science genius and major lunch money mooch Pod says, "The fate of the world rests on my shoulders," Squish points out, "You don't have shoulders." Helpful arrows go on to add that Pod has no ears, no nose, no butt, and no shame, as well.

Squish's other (sort of) sidekick is a "girl" named Peggy, she of the eyelashes and overly optimistic smile. Peggy thinks everything is cute and nice and sweet, up to and including the school bully who threatens in all seriousness to devour her. Typical Peggy talk: "Guess what??!!?? ...I got a new slime mold!!! The cutest ever!!! I named him Fluffy!!! You guys want to see him after school??!?!"

There's a sort of mind-bending meld of everyday kid and microscopic pond life here. This occasionally strains credibility, but then, I'm pretty sure you won't care because the whole thing is clever and fun. So Squish eats Twinkies and goes to school, but his principal is a flatworm named Mr. Planaria and his science teacher is Mr. Rotifer, while the mean kids in the detention room include E. coli and parasites.

You may recall that in the Babymouse books, the narrator chimes in on a regular basis, alternately addressing readers and the main character, while Babymouse sometimes talks back to him. Here the narrator is also pretty participatory and even metacognitive (or metacommentative!). For example, when Mr. Rotifer says, "Now we're going to discuss the plant. This is the stem, these are the roots, this is the blah-blah-blah," the narrator's arrow-boxed remark is "What's with the blah-blah-blah?"

Adding further dimension to the storyline, Squish is a big fan of a comic book superhero named Super Amoeba, and we are given excerpts from the comics he reads (sometimes classically concealing them inside of his schoolbooks).

Matthew Holm's artwork is cheerful and clean. As in the Babymouse books, the strong black lines are highlighted with a single color. For Babymouse, it's pink (well, orange on Halloween). Squish's highlight color is pond-scum green, appropriately enough.

The plot is not particularly complex, but then, this book mostly introduces the characters and sets us up for further adventures. The story does include a nice twist. And the Holms throw in quite a lot of science info along the way.

Some second graders will need an explanation of the setting and the single-celled nature of the characters, but otherwise, this series promises to be a nice option for fans of Jarrett Krosoczka's Lunch Lady books. I will just note that it reads a tad younger than the Babymouse series, at least in this first outing. In fact, Super Amoeba feels a bit bland in comparison to Babymouse, but I'm curious to see how the series builds in future books.

Watch the book trailer for Squish here. I will also point out that Jennifer L. Holm has won three Newbery honor awards for her historical fiction. Wow!

Can't wait to read this one. A microscopic superhero is an awesome idea!

I am in total agreement with you, Kate! We are huge Babymouse fans in our library, and kids are thrilled with Squish. I love how you describe the perfect mind-bending meld between everyday life and bizarre fact that all the characters are microscopic pond scum thing-ys! (OK, my non-scientific description!).

I agree with you that 2nd graders will need a little help with the setting and some of the science vocab, but once you read it aloud to them, they'll read it again and again.

Did you see the NY Times review? It made me really angry, frustrated, disappointed. Out of touch, in my opinion.

And Mary Ann, I looked up the NYT review. Huh. Well, I agree that Squish needs a bit more plot, as it reads like an introduction to the setting and characters, but I do think it's promising. I hadn't realized the last Babymouse book introduced the Squish series.

I did have to roll my eyes when the reviewer said Squish wasn't sufficiently scientific when it said that some microscopic organisms are "pure evil." Hello--what about those Twinkies? The science is thrown in as a bonus, but the storytelling here is all imaginary, and all about school and kids!

I suppose it would be nice to have a stronger girl character, but Peggy is awfully funny. I'm sure we've all met people who talk in chirpy explanation marks!

For anyone who wants to take a look at the NYT review, here's the link:
http://www.nytimes.com/2011/05/15/books/review/childrens-books-babymouse-graphic-novels-by-jennifer-l-holm-and-matthew-holm.html?_r=1&ref=childrensbooks