A Review of The Magnolia League by Katie Crouch

If you liked Beautiful Creatures by Kami Garcia and Margaret Stohl, check out the first book in this new series by Katie Crouch, which is even more Southern gothic, if that's possible. Crouch has cleverly transformed the idea of the debutante into an initiation ritual into a secret occult society. Turns out the rich and beautiful women of Savannah, Georgia, owe their success to a pact with a clan of voodoo practitioners, the Buzzards. And now that Alex Lee's hippie mother is dead, Alex has been sent home to live with her grandmother, who is the powerful leader of the Magnolia League. 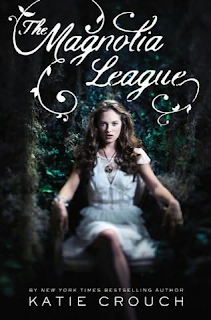 Of course, Alex doesn't know any of this at first, just as she has no clue about the significance of the necklace her mother left her. No questions about the way her mother died, either...

Alex snoops around, wondering why everyone is acting so strange—why she's not supposed to talk to the charismatic Sam Buzzard and why her grandmother is so determined for Alex to become a deb. Most of all, she wants to get out of town, right back to the hippie commune in Northern California where she thinks she's found true love in the form of a slacker named Reggie.

Crouch has a great time giving her basic premise a twist by making Alex a modern-day hippie child. In fact, Alex's personality is my favorite thing about the book, which begins, "You know what I hate? Sweet tea." And goes on to give us lines like this one from a knowing fellow deb: "'We're the New South,' Hayes says. 'Like Justin Timberlake.'" Take a look at Alex at an outdoor party with her deb "friends":

The guys all wear a uniform: khaki shorts, a polo shirt, and a baseball cap. The girls, on the other hand, look like exotic birds, bright, colorful, dressed to the nines, even though they're out here in this dusty field. The boys bob their heads solemnly to the music and drink seriously out of their red plastic cups; the girls laugh loudly and manage to text nonstop while juggling cigarettes, plastic cups, lighters, and purses and still never missing a beat in their conversations. All of them are slapping at the mosquitoes that swarm their faces. All of them, that is, except Hayes, Madision, and me. I can hear the insects whining in my ears, but for some reason, they aren't biting.

"It's our perfume," Hayes explains, spraying more on me. "Magnolia herbal secret."

"The Magnolia League was into herbal medicine way before anyone else was," Madison says. "Why do you think they all look so forever twenty-one?"

"My mom knew a lot about herbs," I say. "Maybe that's where it comes from."

Alex's plans to return to Mendocino don't play out quite the way she thought they would, and meanwhile, she has met a new guy, the troubled and troubling Thaddeus. She has also made friends with a couple of fellow outsiders, to her grandmother's horror.

As a reader, you may find yourself shocked when free spirit Alex is seduced by the joys of being a member of the league, pulling away from her new geek friends as she discovers that voodoo can give her things like shiny, cooperative hair and easy weight loss. (Alex is a bit on the chubby side.) Then again, she is a teenage girl, and she doesn't completely sell her soul, at least not without some trickery on the part of Hayes and Madison and her own grandmother.

But Thaddeus—and the awful truth about the Magnolia League—aren't that easy to avoid, and Alex finds herself more torn than ever as the book comes to a close and she's hit with a huge, nasty plot twist.

First-person present tense narrative, pop culture references, and a cliffhanger ending: This book is trendy, yet manages to avoid being a paranormal clone. The characters are truly intriguing, especially the Buzzards. The premise and plot twists are satisfyingly dark as well as human, and tempered by the author's sly humor. A bit of a beach read, but a good one!

Note for Worried Parents: The California commune is a pot farm, more so after Alex's mother dies, and Alex herself smokes pot rather casually. She is also fairly casual about the idea of sex and has fooled around a bit with her older hippie boyfriend, though she's never gone all the way.

Visit Katie Crouch's website here. She has written adult fiction set in the South, as well.

My thanks to the publisher for providing me with a review copy of this book.