A Review of Small as an Elephant by Jennifer Richard Jacobson

Did you ever have a passionate interest as a child? My friend's son knows everything there is to know about the Civil War. I have a niece who is horse crazy and a couple of my students know all about cars—one of them specializing in muscle cars and the other in street racing.

For Jack, it's el 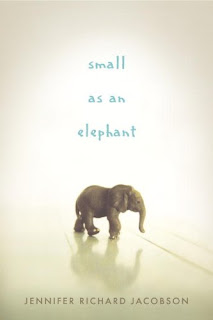 ephants. And maybe it's the very steadiness of these large beasts that appeals to him, for heaven knows his life is anything but stable and predictable. Jack himself doesn't know the term, but readers will quickly guess that his mother is bipolar. Jack also doesn't seem to realize that he shouldn't be dragged here, there, and everywhere; being a kid, he's just along for the ride.

But his usual shrug-oriented attitude doesn't do him a bit of good when his beyond-flighty mother abandons him at a campground on an island in Maine. From here on out, it's a hide-and-survive story as Jack searches for his mother and then heads for his home in Boston while trying to avoid the police.

Of course, Jack can't stay in one place for very long because people start asking questions. Like the guy at the ice cream parlor, where he wishes he could ask for samples all day, but only gets two before he bolts. Or the family at the next campsite, who look after him for a little while before they start asking to see his mother for themselves.

To make matters worse, Jack hurts his finger, and he can't afford to try to see a doctor about it. Good thing the man in the bar wraps it for him. But the man seems awfully curious.

The trouble is, Jack's mother has quarreled with her mother and painted her as a bad person, so Jack is fearful of trying to contact his grandmother. And he knows that social workers would take him away from everything he knows, so he doesn't want that, either. No one can know that his mother is gone.

Jack steals a little elephant from a shop to give himself courage, though he feels kind of bad about it. He also looks at his YouPage on a library computer, hoping his mother has left a message. She hasn't, and his cell phone isn't any help, either. So after a few days looking around near the campsite, Jack decides to go back to Boston.

One of the most interesting things about this book is how it shows in such detail what a person Jack's age might do in this situation, step by step. Jack's thought processes are painful, yet revealing. His problem solving is also impressive. After he hurts his finger, he goes to the grocery store:

First stop in the supermarket was the bottle-and-can machine, where he made one dollar and ninety cents. Next stop: freezer section. Jack had to get some relief for his hand. Behind a glass door, he found the frozen peas, his mother's ice pack of choice, and plunged his hand deep inside mounds of crunchy bags. Fortunately, it was still fairly early, and most of the shoppers were more interested in coffee than frozen vegetables. He left his hand in as long as he could stand the cold and then pulled it out.

It helped, but he'd hardly made it to the frozen pizza before his pinky started throbbing again, so he slid it into another freezer case. This was how Jack moved up and down the aisles: clinging to frozen orange juice, wrapping his fingers around pints of ice cream. Even yogurt cups, which were not frozen but cool to the touch, provided relief.

He considered spending his money on a bag of ice, or even on some Advil, but knew that the ocean was close by and that he'd be able to give his finger a long soak if the pain didn't go away soon. Instead, he chose trail mix and a bottle of water.

Also poignant are the chapter headers, which are quotes and facts about elephants. The elephants' family dedication and reliability are offered in clear contrast to Jack's own situation.

Jacobson's methodical, almost muted tone heightens the power of this book, which in its gentle way is just as much a survival story as something like Gary Paulsen's Hatchet. The tension ratchets up when Jack starts seeing his face on the news. And he meets all kinds of people, some of them more willing to help him than others. For example, there's a girl named Sylvie who says bluntly:

"Convince me that I'm wrong. And everybody who's out looking for you, everybody in the state of Maine and your grandma and the police—convince me that we're all wrong, and that you're better off on your own."

Jack replies that he'll be taken away from his mother, which is clearly the most terrible thing he can imagine.

But then, he was also hoping to see an actual elephant on this trip, and somehow, he winds up heading toward the elephant instead of his old home.

As the lovely, understated cover art suggests, Small as an Elephant is a quieter book than some. It is nevertheless an adventure. Then again, thoughtful readers will appreciate, not only Jack's physical survival and his success in not being caught, but his inner quest to make sense out of having been abandoned by his mother.

I'll end with the Chapter One elephant quote from Peter Corneille: "If anyone wants to know what elephants are like, they are like people, only more so." And people are like elephants, fortunately for Jack. Little by little, readers will discover that Jack is loved and helped by a herd he hadn't even imagined.

Also: If you like this book, try Walter Macken's classic, Flight of the Doves. It's an old favorite of mine. The character interactions as Finn and Derval flee their stepfather and travel from England to Ireland remind me of Jack's journey. For that matter, try Homecoming by Cynthia Voigt, in which four children abandoned by their mentally ill mother in a parking lot travel cross-country in search of the grandmother they've never met.

Reading this review I thought immediately of Voigt's Homecoming, which was wonderful. Also, have you ever read I Am David, by Ann Holm? Very different scenario, but same idea of kid too young to be on his own trying to make his way to safety. Now that I'm a mother I find these stories much more harrowing than I used to!

Kim--I've never read I Am David, but I'll look for it. I hope you've read the rest of the Tillerman books; such wonderful writing. I know Dicey's Song won the Newbery, but I'm especially fond of Voigt's Newbery honor book, A Solitary Blue (speaking of poignant books about disconnected boys betrayed by their mothers!).

Yeah, the thought of those kids out there is pretty harrowing. Most of the lost boys in real life don't get Jack's happy (safe) ending.

I am deeply moved just by reading your review. I am a sucker for novels such as this. Shows great depth and quiet subtlety. I would definitely look out for this book.

Myra--Oh, good! I hope you get a chance to read it. I'm most often a fantasy reader, but every so often a serious, probably-poignant book calls out to me.