A Review of Wrapped by Jennifer Bradbury

Picture Y.S. Lee's The Agency: A Spy in the House at a tea party with Marissa Doyle's Bewitching Season and a couple of R.L. LeFever's Theodosia books. Be sure to add a mummy as the table's centerpiece, and you're in business with Jennifer Bradbury's new outing. 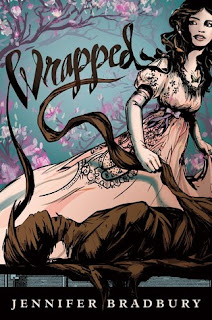 Did you know that in the 1800's, when Great Britain was fascinated by all things Egyptian, wealthy collectors used to hold mummy unwrapping parties? I'm not sure if that's the specific fact that inspired this book, but it certainly makes for a terrific story starter: our tale begins with the intrepid (well, bored) Agnes Wilkins attending a mummy unwrapping at the home of her soon-to-be betrothed, Lord Showalter.

Each of the guests who helps unwrap the mummy is allowed to keep any trinkets he or she finds in the wrappings. Agnes doesn't admit she has found a small amulet, and when Lord Showalter announces in some agitation that this is the wrong mummy, she is too embarrassed to return the small metal dog's head.

Then the guests who have participated in the unwrapping have their homes burglarized or are attacked, and Agnes turns sleuth. Is there really a mummy's curse, or is this an all-too-human plot of the nefarious Napoleonic variety?

Either way, Agnes finds she would rather spend time investigating the mystery with the help of a touchy, clever assistant curator at the British Museum than flirt with Lord Showalter, who seems to have secrets of his own. But Agnes and Caedmon find themselves in peril of their lives... Naturally!

Throw in a secret society or two and the secret codes to match. Be sure and make Agnes a linguistics specialist, the daughter of England's chief spymaster. Yes, it's all a little campy, but it's also a whole lot of fun! Here's Agnes in action, cutting the mummy's wrappings:

Then a metal edge emerged from the cloth in front of me, like a scallop shell half buried in the sand. My pulsed raced as the undeniable excitement of the moment took hold. I glanced up to see if anyone else had seen it yet, but they were all still attending carefully to Showalter's impromptu lecture about Rupert's ankh. So no one noticed as I pulled the item from the wrapping. No one but me saw the object breathe fresh air for the first time in a thousand years. The feeling was unexpectedly thrilling, and I could only imagine what it might feel like to unearth whole temples forgotten to time, like that Swiss man had found at Abu Simbel a couple of years ago.

I started to call to the others, but they were listening raptly as our host delivered a detailed description of a small scroll found by Lady Kensington at the shoulder of the corpse.

There's a bit more talk than action in this book, but the plot as a whole is pleasing, as is Agnes's growing attraction to the unsuitable yet honorable Caedmon.

If you liked any of the books I listed above, let alone Stephanie Burgis's Kat, Incorrigible, you'll probably enjoy Bradbury's novel. Wrapped is fairly predictable, a lighthearted adventure, a mystery and a spy story. There is just a touch of the paranormal for you fantasy fans out there. The author has left room for a sequel, with spying playing a prominent role. And she has kindly added an author's note explaining about the mummy unwrapping parties and spies of the Napoleonic era.

I suggest you unwrap this book!

Note for Worried Parents: This one is wholesome enough for middle grades, though it's being marketed to a Young Adult audience. I think 10- to 14-year-old girls would like it.

Also: Read about the author at Simon and Schuster's website.

I just posted a review of this myself. I didn't like it like you did though. The historical inaccuracies completely ruined it for me. I felt Bradbury just doesn't know or get the time period. Reading Kat Incorrigible I felt like Stephanie Burgis knew her historical setting like the back of her hand. Same with the Theodosia books. That wasn't the case here. Plus I didn't much like Agnes.

Brandy--Ha. Well, I thought it was a bit bland, but cute. The historical stuff didn't get to me as much as it did you! I'll go read your review now. :)

I wondered about this book. I have it on my wish list and was debating about purchasing it for the Kindle. I'm glad to read your review.

I think I'll like this one--I ordered it last week and amidst all the WSJ brouhaha didn't open it til the weekend was almost over. I'll be sure to read it soon, though.

Lin and RNS--It's a fun one. Let me know what you think!