A Review of Grave Mercy by Robin LeFevers

Forget about Catherine, Called Birdy; it's time to meet Ismae! If your horrible father forces you into an arranged marriage in 1485, what you really want is to flee to a convent where the nuns specialize in training female assassins. Hopefully you'll get to kill some men who remind you of dear old dad. Except—Ismae isn't really her father's daughter. As the circumstances of her birth make clear, her true father is Death, or "St. Mortain." Once she has passed a test at the abbey (by not dying), Ismae finds happiness in her new life. She makes a friend named Annith and trades her father's endless beatings for intriguing lessons. She even learns to read. Ismae is especially good at poisons, and she meets a strange girl named Sybella who has apparently survived horrors worse than her own. 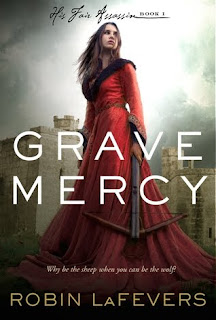 Soon Ismae is being sent out on an assassination mission. She succeeds, and another mission follows. But her third mission isn't like the others. Ismae is asked to accompany a man named Duval to the court of the young, uncrowned duchess of Brittany. There she will have to face intrigues for which she is thoroughly unprepared, including spying on Duval to see if he is loyal or a dangerous enemy.

As Ismae sneaks about the castle, you may be reminded of Elizabeth C. Bunce's Starcrossed or Rae Carson's The Girl of Fire and Thorns. Who can be trusted? Obviously not the brutal Lord D'Albret, who is trying to force the young duchess to marry him. Nor the French, who consider themselves to be in charge of the girl. But even though Ismae is feeling more and more like she can trust Duval, her contacts from the convent pressure her to find him guilty of treason.

LaFevers does a masterful job of showing how a sheltered, downtrodden girl can grow in confidence and purposefulness. Yes, there's an odd sort of romance brewing between Ismae and Duval, but the rest of the plot holds its own. The characters seem so real and ordinary and flawed that it's easy to forget you're reading a story. The world the author builds is a medieval one—with a twist. The language is smooth and clear. Here's a sample:

We ride all day. In the newly cleared fields, sheaves of wheat hang from a cross, begging for Dea Matrona's blessing on the harvest. Cattle graze nearby, feasting on the remaining stubble in the ground, one last fattening before slaughter. Indeed, the slaughter of animals for winter has already begun and I can smell the copper tang of blood in the air.

A few stone cottages are scattered throughout the countryside, squat and stubborn against the encroaching wildnerness. Most doors have a polished silver coin nailed to them, an attempt to discourage Mortain from casting His gaze on their households, since it is believed He will go to great lengths to avoid His own reflection. Those that are too poor to afford that small protection hang hazel twigs, in the hope that He will mistake them for the real bones He has come to collect.

One ongoing mystery in Grave Mercy has to do with the will of Mortain, or rather the mark of Mortain. Being Death's daughter gives Ismae certain powers. Taught that when she sees the mark on someone, she has the go-ahead to assassinate them, Ismae begins to wonder if the nuns got it quite right. This book is arguably a coming-of-age story as Ismae begins to trust her own judgment even when everyone around her says otherwise.

Grave Mercy is a long book, but a thoroughly satisfying read. The next book in LeFevers' His Fair Assassin series will be about Sybella, and it's a safe bet the third book will be about Annith. Definitely something to look forward to, not to mention a nice break from fallen angels!

Note for Worried Parents: This is a book for teens with some mature situations involving violence and sex (or the threat of both together). Though these scenes are handled tastefully, I wouldn't recommend Grave Mercy for tweens or MG readers.
Posted by KateCoombs at 3:08 PM

I keep hearing brilliant things about this book. This is one of those I need to get over my aversion to long books and go ahead and read myself (not just consider for the library), isn't it?

. . . where the nuns specialize in training female assassins . . .

Love it! Sounds like it could be incredibly cheesy, but if it's well-written could be a lot of fun. I shall keep my eyes open for it.

Kim--Definitely fun! And surprisingly light on cheese. More of a soap opera, the semi-historic kind.