This morning I took a quick look at rottentomatoes.com to see what the reviewers were saying about Tim Burton's Alice in Wonderland, and I had to laugh. Talk about mixed reviews! "Loved it" alternated pretty evenly with "hated it."

So this afternoon I saw the movie for myself, and I think I've figured out why the reviewers are so riled up. The following are my Tweedledum and Tweedledee takes on Tim Burton's Alice.

The Review for Alice Purists: Why You'll Dislike This Movie 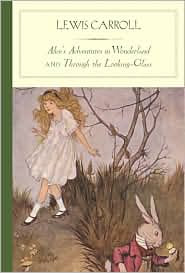 What a travesty! Tim Burton takes the complex, whimsical world of Alice in Wonderland, where anything might happen, and transforms it into a setting for a straightforward, predictable quest fantasy in which an insecure main character, aided by new friends, must get the courage and self-confidence to slay a dragon and return home triumphant. The story is too linear, not to mention unsurprising. So what if a cool-looking CGI monster pops up every so often? Those things are a dime a dozen in today's movies.

I ask you: who wants to see a jabberwock, let alone a vorpal sword? The jabberwock is a legend for a reason, a terrifying collection of details like teeth and claws hiding in the shadows, here sadly reduced by being made visual. And if that sword truly had to be shown in a movie, I'm pretty sure half the kids in this country could have come up with a better design!

Besides, Burton followed the new rule of "children's" film-making: unless your movie is for five-year-olds, you will make the hero or heroine somewhere between the ages of 16 and 20. In fact, this Alice is so old and jaded that she thinks her long-ago childhood adventure was a dream, one she's mostly forgotten. She spends half the movie trying to convince herself that what's happening isn't real (cliché alert!).

As if this weren't enough, Alice is on the verge of marrying a smarmy, unimaginative man, pressured by half the population of England to say "yes." In other words, Burton wants this movie to be a feminist fable, showing us not-at-all-subtly that any girl who can drum up the courage to slay a jabberwock can handily turn down a bad offer of marriage, gosh-darn-it. (Watch for an ally near the end of the movie who, in the London of Alice's day, would never have cooperated in the least.)

Furthermore, the whole story has been written to give Johnny Depp as much screen time as possible, which throws the pacing off. Burton also insists on repeating some of Carroll's coolest lines until they're beaten into submission. Then he shows his utter lack of confidence in his audience's smarts by having Alice point out the last little Wonderland touch in the final seconds of the movie. Ouch! 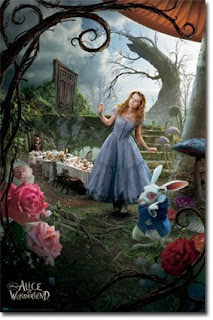 The Review for Non-Purists: Why You'll Like This Movie

The characters are rendered wonderfully, as well, mostly in terms of design, but also thanks to great casting. You'll like Johnny Depp as a soulfully mad Hatter, but wait till you meet Helena Bonham-Carter as the Red Queen, or—my personal favorite—Alan Rickman as the Caterpillar (here named Algernon). The card soldiers are perfect, and of course, Crispin Glover as the Red Queen's evil knight is poignantly repulsive.

Small, creative touches abound, such as the Red Queen's oversized head, especially in combination with the way her courtiers wear false oversized body parts to curry her favor. I like the Dormouse as a miniature warrior with a ghastly penchant for spearing eyeballs. The Cheshire Cat is a tour de force, especially as used to further the plot and for one particularly lovely match cut involving the moon.

I'll remind you that Lewis Carroll's book is mostly episodic, albeit delightful. This means it meanders, which is not what movie scripts are supposed to do. Perhaps that's why Tim Burton decided to go his own way, using Wonderland's setting and characters to create something new. While his plot is fairly ordinary in fantasy terms, it does allow him to show off the setting and characters while moving things along at a brisk pace.
Each scene is a nice little capsule of lunatic dialogue and bizarre beauty. And as fantasy battles go, the climactic scene is especially good.

Could Burton have done justice to Carroll's Alice if he'd stuck to the original storyline? I doubt it, although I would have liked to see him try. But while this movie isn't a perfect rendering of Carroll's story, it does capture the author's vision of a strange and wonderful world, a happy departure from our own reality.
Note for Worried Parents: Small children will probably be frightened by the monsters, menace, and occasional gore in this film.
Posted by Kate Coombs at 9:34 PM

I can't wait to see this one in Imax 3d. I love Tim Burton! And as far as Alice in Wonderland purists are concerned, there are probably more film versions of that story for them to enjoy than any other children's story. Surely they can enjoy a version that's a departure and if not, they can wait a year or two. There will be another production on television or film.

I'm going to see this tomorrow afternoon. After reading your reviews, I'm glad I didn't reread the book first. Hopefully, I can forget about comparing plot points and enjoy seeing whether the characters match my childhood images.

Is there any other children's books that has imprinted us with so many eccentric personalities? I counted seven off the top of my head and the last time I read Alice and Wonderland was in high school.

Tan--Ha. The Wizard of Oz might give it a try, but still wouldn't rack up those numbers. And Alice is weirder, deliciously so! Enjoy the movie. :)

Great review and a useful one. I'll see it myself but not take young daughter. Thanks!