A Review of Knightley Academy by Violet Haberdasher

There's enough Harry Potter going on here that some might accuse Knightley Academy of being derivative: poor, underdog boy unexpectedly qualifies to go to a special school, arriving there via train, where he makes a couple of good friends, including a goofy boy and a clever girl... The boy's name is even Henry, which is of course a form of Harry. And yep, the author is a Brit. 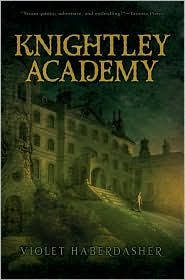 Then again, I prefer to think of this book as being partially inspired by Harry Potter. Because Knightley Academy is a likable tale, with a likable main character, Henry Grim. And Haberdasher quickly turns the story into her own creation. For example, the school in question doesn't offer instruction in witchcraft and wizardry; it's a training school for knights. In fact, there's not a trace of magic in Haberdasher's book. (I should explain that these knights don't wear armor and joust, although they do fence. Knightley is basically an academy for nurturing leaders and certain kinds of civil servants.)

At her website, Haberdasher herself explains the genesis of her story:

Knightley Academy began quite innocently, in the dimly lit balcony of a theatre during intermission. I attended an elite school for young ladies, which I quietly despised. As my classmates giggled over the performance, I sat and wondered if every school had a student who felt like an outsider. I wondered what sort of boy would be branded odd and different at a school for knights.

Henry Grim is Haberdasher's outsider. At first he lives at another school, an academy for privileged boys. Only he isn't a student, he's a servant. Fortunately, a genial professor has proved willing to offer him secret lessons. All of the boys in the school are hoping for admission to Knightley Academy, and when the examiners come around, Henry is amazed to find himself sitting for the entrance exams. It turns out Henry is the only boy from Midsummer School who gets into Knightley, to the dismay of the regular students, especially the snobby Valmont (um, totally Draco Malfoy!).

Lord Winter, the new headmaster at Knightley, is much less conservative than the Board of Trustees, who are appalled at this turn of events, but grudgingly agree to let two more openings at the academy be given to commoners as a sort of pilot program. When Henry arrives at Knightley, he is snubbed by the arrogant noblemen's sons, including his nemesis Valmont, who manages to show up, after all. However, Henry is assigned to room with the other two commoners, Adam and Rohan, and the three become fast friends.

Rohan may be Haberdasher's most interesting character. In a book with an acknowledged alternative British setting, Rohan is the adopted son of a lord, but is actually Indian. This means that he has the upbringing and, to some extent, attitudes, of the privileged boys, but is completely disdained by those boys for being dark-skinned. For that matter, Adam is Jewish. One of the themes of the book is discrimination.

At Knightley Academy, Henry and his friends face, not only bullying from the other boys, but outright sabotage from unknown enemies who want to see this experiment with commoners fail. (Among the suspects is a Snape-like instructor, Lord Havelock.) Happily, Henry has allies—besides his roommates, he can call upon his old tutor, who is now at the school instructing Lord Winter's daughter, Frankie. The girl is another ally and a great character: she has been kicked out of various ladylike boarding schools for her irrepressible ways and soon teams up with the three commoners. One of my favorite scenes is when she warns a bully not to mess with her, citing her semi-delinquent history in a most sinister way.

The bigger threat in this book is a country called Nordlands, which promises to provide fodder for the rest of the series. In Nordlands, individual freedoms are increasingly curtailed—the place reads like a mashup of Nazi Germany, Stalinist Russia, and today's Iran. (For example, the government forbids education for women.) In a slightly awkward plot point, news of the oppression is printed only in the gossip rags in Britain. This means that the lower classes believe the rumors, but boys like the Knightley students do not. At least, not until the boys from Knightley travel to Nordlands for an inter-school tournament, and Henry finds out a few things for himself.

Now, perhaps I'm being unfair to first-time author Haberdasher when I compare her story to Harry Potter. But one of the strengths of her book is something I find very Potterish indeed, and that's a sort of hopeful, cheery tone, a convivial sense of the power of friendship among a group of nice kids. It's a tone that characterized J.K. Rowling's earliest books about Harry Potter, and I think you'll be pleased to discover it in this first book about Henry Grim. So while Haberdasher doesn't do the same kind of world building as Rowling in terms of wildly inventive details (e.g., quidditch and Bertie Bott's Everyflavor Beans,), she does write a group of characters worth reading about, in a new school that kids are going to want to visit.
Tellingly, Tamora Pierce is quoted on the front cover: "Steam-punky, subversive, and enthralling!" Pierce is best known for her series about girls training to be knights. Like Henry, they are outsiders, treated badly by boys who don't think they should be there. While I don't know about subversive or even steam-punky (what a word!), Knightley Academy is pretty enthralling.
Note for Worried Parents: Knightley Academy is middle grade fiction. Other than some bullying and an oblique mention of torture, it's quite wholesome.
Update: Here's a link to the Knightley Academy book trailer. If I'm not mistaken, the part of Frankie is being played by the author, the pseudonymous Violet Haberdasher.
Posted by Kate Coombs at 7:51 AM

Thanks for the review, Book Aunt! By the way, I’m all for books that are derivative of Harry Potter. Harry Potter is derivative of a number of other sources, including the movie Troll (an eighties horror film featuring Sonny Bono). When I was a kid we had THE WORST WITCH, which was about an awkward student trying to fit in at a magical boarding school. The regular boy who gets a chance to go to a fantastic school is a staple framework for middle grade novels and a plot we’ll be seeing again and again forever. So long as authors find a fresh way to tell the story and create a memorable reading experience, I don’t have a problem with it at all.

Good point! Supposedly there are only 7 plots in the universe, after all, and I'm pretty sure #6 is "Underdog goes to magic boarding school." :)

What I should really be saying is, "If you liked Harry Potter, you'll probably like this book, too!"

Have to admit I missed Troll...

This sounds rather fun!