A Review of The Pickle King by Rebecca Promitzer

The Pickle King reminds me of a particular group of books, most of them about villainous factory owners, particularly food fabricators, and many of them drizzling with perpetual or near-perpetual rain: Fortune's Magic Farm by Suzanne Selfors, The Secret of Zoom by Lynn Jonell, Canned by Alex Shearer, and The Deep Freeze of Bartholomew Tullock by Alex Williams. More distantly, Pickle King has echoes of Charles Dickens and Joan Aiken. In each book, evil rich people oppress a town, their misdeeds covered up by bribery and/or dark magicks. The awful secrets are eventually brought to light by a kid or a group of kids. 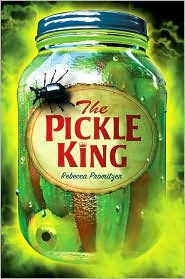 Amazon calls this a YA, although it reads like middle grade fiction much of the time. The publisher's website says "10 and up." The Pickle King includes horror elements such as rats, roaches, and, most important, human body parts. In some ways, the book is simply a mystery about contemporary kids. But psychic powers, hidden histories, and things like a secret community of misfits living beneath a garbage dump make it more of a paranormal/fantasy/horror story, part of a new subgenre inspired by books like Neil Gaiman's The Graveyard Book.

This entrant is a little uneven, but there are quite a few things I liked about it. The setting has a nice Twilight Zone vibe, and Bea draws you into her worries as well as her friendships and adventures. I was basically a happy reader for about half the book, after which I felt a slight loss of interest. I ended up being disappointed by the way the story concluded—as much for plot choices as for a heavy-handed cliffhanger after what seemed like four final chapters in a row.

The rain is essentially a character here, and Promitzer describes it really well, bringing it up over and over again. If you get tired of this, recall that main character Bea is just as sick of it as you are! One of her chief goals in life is to escape the rainy town of Elbow and go visit a place like Florida, where the sun shines. Here's a rainy sample from the first chapter:

Anyway, it was summer vacation in Elbow and, of course, it was pouring rain.
I don't know if you've ever been anywhere where it rained for a few days without a break, not even a little one. If you have, you'll know that it makes you feel edgy, kind of jumpy inside. There are shadows, an unnatural kind of light, strange rainy noises, and you start to feel like you can't trust the regular things around you, the things you take for granted. Sometimes it seems like the things you've seen in scary movies or your own nightmares have come alive and are real—and have moved in for good. Other times it's as though you're living underwater and there's no air, and you really start to believe the sun will never ever shine again. It's no good for anybody to spend the summer in Elbow, but it's the kids like me who have to hang around; kids with no money or no parents or a bit of both. Some of us have got green growing between our toes from all the rain. It's a kind of mold. Bertha says it's the start of webbed feet.

TV screenwriter Promitzer tells a fairly compelling story in The Pickle King, and readers will find themselves going along for the ride with Bea on the bike she has spray-painted purple. The first place Bea brings us is an old house, where her friend Sam shows her a dead body. Aspiring photographer Bea takes pictures of the corpse, only to find when she gets home that the dead man's ghost appears to be haunting her camera.

Bea is accompanied by a nice little cast of characters. First there's Sam, a kid from the wrong side of the tracks who is alternately neglected and abused by his thuggish older brother and his father the drunk. We also get Sam's dog Jellybean, who provides comic relief along with some Lassie-like proclivities in a crisis. Sam and Bea reluctantly seek out other members of "The Summer Club," starting with rich girl Madison, whose initial superficiality and shoe fetish turns out to hide her unhappiness and a bad habit. Next we meet Eric, a young mad scientist who's really not that good at inventing things, and Butterfly, who is endlessly doomed to babysit her younger brother, Nelson.

Throw in some sinister villains, a jar of Herman's Red Devil Relish (also haunted), and you've got quite the summer vacation! Although sometimes the "blech" factor seems a little calculated, young readers will probably get a kick out of it. This book is obviously intended to be followed by a sequel. While I could wish for a slightly stronger plot next time, I do recommend Bea Klednik as your guide to some unusual adventures.

Note for Worried Parents: Sam smokes, and he offers to share his cigarette with the other kids, one of whom accepts. Other than that, just the horror elements mentioned above and a little preteen attraction—one kiss and some hand-holding, for example.
Posted by Kate Coombs at 8:34 PM

Thanks for the detailed review. I was debating this one on my order list - hadn't seen anything about it, but a vague description that sounded kinda interesting...we already have Canned and I've been meaning to get Fortune's Magic Farm, b/c I booktalked it to kids at school last year and they were interested but I never got around to buying it...

Hey, Jennifer! Yes, isn't Canned an odd yet fun book? I like Fortune's Magic Farm, too. As you can see, I have mixed feelings about The Pickle King, but the kids might like it.