I haven't met a lot of dedicated bibliophiles under the age of 18, unfortunately. So I was really very gratified to run into a kid named Chelsea in the children's book section of Barnes and Noble the other day. It started when she told me the book I was holding was good. Pretty soon we were exchanging book suggestions—I was surprised how many of the newest titles Chelsea had already read. But she made her very best pitch for a book that's been out a couple of years, The Name of This Book Is Secret. It was one I'd passed up, but then this sixth grader sold me and I decided to take a look. (Thanks, Chelsea!)

There's a Lemony Snicket feel to this one, and presumably to the other two books in the series, If You're Reading This, It's Too Late, and This Book Is Not Good for You. The author spends the prologue and Chapter One warning you not to read the book, for your own safety. Pseudonymous Bosch (great play on words!) continues to interject remarks throughout the book, which I sometimes found distracting. 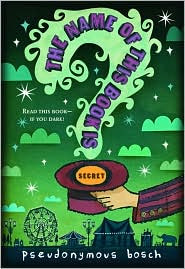 I liked his (her?) main characters, though, code named Cassandra and Max-Ernest. Cass's key idiosyncrasy is that she is a survivalist, carrying a backpack of supplies at all times. For his part, Max-Ernest talks a mile a minute. Even more amusing are his parents, who live in the same house "for their son's sake," but have split it down the middle and are driving the kid nuts with their parenting competition.

While hanging out with her adopted grandparents, Larry and Wayne, at their antique shop, Cass encounters a mysterious box called The Symphony of Smells which was discovered at the house of a vanished magician. Cass and Max-Ernest end up investigating the house, where they meet up with the book's villains, the ultra-creepy Dr. L and Mrs. Mauvais. The couple are after the magician's notebook, but Cass and her friend get there first and then make a run for it. After reading the notebook, Cass realizes that the doctor and the too-beautiful blonde have kidnapped a boy from her school. Feeling responsible, Cass sets out on a rescue mission to a spa called the Midnight Sun, with Max-Ernest close behind her.

The author has fun with satire in The Name of This Book Is Secret, such as the way a popular girl at school collects a kind of lip gloss called "Smoochies," magnanimously offering her used ones to outcasts like Cass, or the over-the-top depiction of the youth-and beauty industry at the spa. And the adventure will pull young readers along. I especially liked the idea of The Symphony of Smells, as well as the role synesthesia plays in the book.

Readers who get a kick out of the tongue-in-cheek tone of books like Lemony Snicket's Series of Unfortunate Events and the more recent A Whole 'Nother Story by Dr. Cuthbert Soup might want to give Bosch's series a try. But be warned, be thoroughly warned! Because Pseudonymous Bosch really wants you to think twice about reading these books.

Note for Worried Parents: We get suspense and then some scary peril at one point, but everything turns out okay for our young heroes in this middle grade offering.
Posted by Kate Coombs at 11:09 AM

Labels: adventure, Lemony Snicket, Pseudonymous Bosch, The Name of This Book Is Secret