A Review of The Boneshaker by Kate Milford

Natalie loves machines. She helps her mechanic father in his shop, repairing motorcars and bicycles and trying to build clockwork machines like a small flyer. It's 1914, and Arcane isn't an ordinary small town. The crossroads is a place of power, where the devil once battled an old musician for his soul and lost.

At least, that's the story Natalie's mother tells her, but is it true? As The Boneshaker progresses, we learn not only that the story is true, but that the uncanny Doctor Jake Limberleg's Nostrum Fair and Technological Medicine Show has something to do with demons, as well. 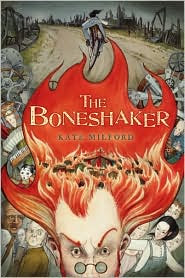 Natalie, whose biggest concern up till now has been her inability to ride the odd bicycle her father has rebuilt for her, the titular boneshaker, now has a whole new set of worries. With her friends, she begins to explore the eerie doctor's medicine show. What she discovers frightens her, but things get even worse when her brother and father decide to bring her ailing mother to the medicine show for treatment.

The author builds her story—and the suspense—beautifully, pulling readers deeper into Natalie's all-too-appropriate fears about Dr. Limberleg and the "paragons" who accompany him. Meanwhile, Natalie's continuing efforts to ride the boneshaker lead us to a final chase scene in which she must ride the bike on a wild night-time journey to save her town and everyone she loves.

Milford gives us fun details like the time Natalie tries to sell a single bee to the town's shopkeeper, along with curious details such as the miniature automata inside Dr. Limberleg's trailer or the way the front left wheel pops off of every vehicle that comes into Arcane through the crossroads. And the medicine show, a kind of carnival, is described nightmarishly well.

The characters here are as marvelously strange as the medicine show. We get to know Old Tom Guyot, the elderly black musician who challenged the devil and won; a devious drifter named Jack (whom you might recognize from folklore); a mysterious rich man who isn't quite human; and stalwart townspeople like the pharmacist and Natalie's friends Alfred and Miranda.

You'll find that Kate Milford has a way with words. Here's Natalie's first glimpse of the flame-haired doctor:

Something about this man seemed...out of place in the general store. It was hard to say where a man like that might belong, but he surely didn't belong here.
He was taller than anyone she knew, and he wore an old-fashioned frock coat like her grandfather wore in old pictures: long and flared at the bottom and too heavy for a summer noon. He carried a tall silk hat under one arm, and there was something odd about his hair, too; the way it stood off his scalp was like the way her hair billowed when she dunked her head underwater.

But, evil though he seems, there is more to Dr. Limberleg than readers first suspect. For that matter, Natalie discovers there is more to her own self than she had previously realized. Natalie solves the problems in Arcane in difficult and thoughtful ways, achieving far more than a victory over her uncooperative bicycle.

Milford's work hints of magical realism and Alfred Hitchcock's subtle touch rather than today's scare-a-minute horror stories. A rich and shivery historical fantasy—or what I like to call rural fantasy—The Boneshaker will appeal to kids who are willing to take the time to watch fear unfold in increasingly unnerving detail.

(Listen to the old Charlie Daniels Band song, "The Devil Went Down to Georgia," for an earlier take on the American musician's-pact-with-the-devil legend. And here are the Muppets performing the song!)

Note for Worried Parents: In addition to mature themes relating to the serious illness of a parent, The Boneshaker features pacts with the devil and demonic horror elements. It's definitely creepy, which explains the publisher's suggested reading range of 10 and up.

I requested this book from the Amazon Vine program after hearing about it on The Enchanted Inkpot. The Boneshaker will come out on May 24.
Posted by Kate Coombs at 11:16 AM

After reading this review and Colleen talking up Boneshaker at Chasing Ray, I am going to have to pick it back up.

The beginning is great but halfway through I got stalled. I love Natalie and the old musician. So I will happily give it another go.

Two other books - I didn't finish on the first go round Book Thief by Zusak and Their Eyes Were Watching God by Hurston. I loved both the second time around.

Doret--Now I'm trying to think of books where I've stalled, then picked up steam again! Aha--I never finished The Book Thief, either! And I'm probably the only person in the universe who hasn't read The Hunger Games, although it's in my TBR pile. (My problem is I'm so soft-hearted that some of the more intense stuff is a bit much for me!)

Off to visit Chasing Ray and see what she has to say about Boneshaker... :)

I'm about half-way through and after a stall, myself, I have to say once the fair sets up in town, the pace picks up a bit and things start falling into place quickly. I'm looking forward to seeing how it goes.

I'm thinking about suggesting it to my 11 year old daughter, who loves fantasy books (Diane Duane, Rick Riordan, JK Rowling et al) but does not like the really scary stuff. So far, I haven't seen anything scarier than what's in those authors' books, but it definitely is a "spookier" book than those. Thanks for the review!