Oh No! and Blue Whales from Mac Barnett

In January I reviewed Mac Barnett's The Case of the Case of Mistaken Identity, a tongue-in-cheek detective story that blithely and cleverly mocks the Hardy Boys. So I was eager to get my hands on a couple of Barnett's picture books, Billy Twitters and His Blue Whale Problem (2009) and now the brand-spanking-new Oh No! (or How My Science Project Destroyed the World). 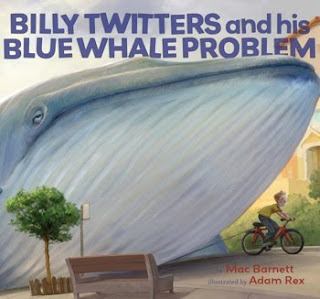 Can you say surreal? That's one of the many words I'd use to describe Billy Twitters and His Blue Whale Problem. When Billy won't clean his room or brush his teeth or eat his peas, his mom threatens him with an ever-so-obvious punishment, "or we're buying you a blue whale."

Narrator Billy tells us, "But I'm not worried. See, I know a thing or two about blue whales. I mean, they're the biggest animals in the world, ever. It's not like you can just have one delivered to your house overnight."

Whereupon we turn the page to find a late-night spread showing a ginormous delivery vehicle driven by a company called "Fed Up." Clearly, it is making an overnight delivery! Then during breakfast, Billy feels something watching him... And we see a huge cetacean eye looking in the kitchen window.

Yep, Billy is now responsible for a blue whale—his mom expects him to take it everywhere he goes, including school.

This story requires some suspension of disbelief, since the whale does surprisingly well out of water. But once you get past that, or sidestep it rather, you can just have fun with the author's playful "what if" scenario. Why would it be such a pain to own a blue whale? And how might a resourceful boy eventually turn the punishment around to serve his own purposes?

Illustrator Adam Rex does a superb job of transforming the author's nutso story into a reality, creating wonderful characters like a teacher who thinks a blue whale is the perfect show-and-tell item and a school bully who tells Billy his blue whale is a stupid pet. Then there's the whale itself, which manages to look slightly stoic and put-upon. (Despite having a whale owner's manual, Billy finds himself struggling to fulfill tasks like feeding his pet. "Dad...where can I find ten thousand gallons of seawater?")

I'm guessing second and third graders will appreciate this funky tale, and it could easily be built into a class unit for writing stories about how other pets might create certain difficulties. Yak, anyone?

Don't forget to check out the endpapers, which are sepia-toned ads for other products from the same company that goes around selling blue whales to suburban families. The ad for the whale itself can be found on the book cover, beneath the jacket. 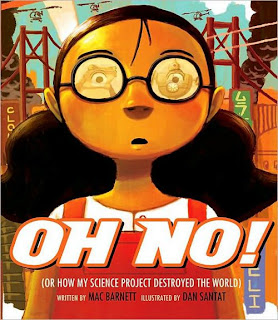 The endpapers in Barnett's newest book, Oh No! or How My Science Project Destroyed the World, are just as good, or maybe even better, done by another talented illustrator, Dan Santat. Be sure and take off the jacket, which has a movie-style poster on the back.

"Movie-style" is a good description for this picture book, actually, which is partly an homage to Japanese monster movies like Godzilla. (See the translations of Japanese phrases at the bottom of the spread preceding the title page.) Like a movie, Barnett's latest begins in media res, as TV screens blare about a disaster and a fifth grade girl walks through the ruined city saying, "Oh no..." "Oh man..." "I knew it."

On the next page turn, we see a giant robot rampaging through the city, and the narrator remarks, "I never should have built a robot for the science fair." She goes on to mention some of the features she wished she hadn't included in her robot--and the ones she wished she had. Ah, hindsight!

So what is our young mad scientist-in-training going to do about it now?

The storytelling here is almost entirely visual, but is easy to follow as Mac Barnett and Dan Santat gleefully build on the author's latest "what if." Santat uses strong colors tempered by browns and comic book as well as movie conventions in his amused portrayal of a science project gone amok. Look for the scene where the narrator is being awarded first prize, as almost everyone in the room is unaware that her project has taken an unusual turn. The titles of the other science projects are especially funny.

And of course, the main character's quick-labwork solution has a bit of that The King, the Mice and the Cheese thing going on... I doubt we'll see a picture book sequel, but a movie sequel is implied, which fits right into the whole cinematic approach of this tale.

The feminist/teacher in me has to stop and thank Barnett and Santat for making the robot builder and science fanatic a girl, by the way.

Of course, boys and girls alike will enjoy this one. (Okay, I don't know if the Fancy Nancy crowd will appreciate it, but a lot of other kids will!) Oh No! is probably more approachable than Billy Twitters, but then, I think it's good to shake up kids' thinking with a dose of absurdism every so often. With nothing but TV thrown at them, children are unlikely to grow up thinking outside the box. Mac Barnett and Co. are here to remedy the situation!

Note: Take a look at Seven Imp's terrific interview with Dan Santat about Oh No! There's a luxurious amount of art in Jules's post. See also reviews at Fuse #8 (with book trailer links) and Books4YourKids.
Update: Canadian author k.c. dyer has pointed out in the comments that Twitter has a blue whale fail symbol--which means there's another bit of satire from Mac Barnett in his Billy Twitters title. (This may even give us a glimpse into Barnett's off-the-wall brainstorming process.) Update of Update: Nope! I found out in reading an interview with Barnett that he came up with Billy Twitters and the blue whale before Twitter even hit the Internet.
Posted by Kate Coombs at 9:02 PM

Hmm. My spidey senses immediately started tingling with Billy Twitters and his Blue Whale problem. Since the fail whale for Twitter is blue...is this a clever marketing ploy...or another send-up? [I'd suspect the latter...to give tech-savvy parents a laugh, perhaps?]

Ha! I did not know that. I suspect Barnett is happy to spoof in any way he can, whenever possible. Thanks for the fun tidbit!

I have a posting on easy and inexpensive science projects for middle school students that I wanted to share with you at http://www.pragmaticmom.com/?page_id=4270

http://PragmaticMom.com
I blog on education, parenting and children's lit.