A Review of The Wyverns' Treasure by R.L. LaFevers

This author may be best known for her Theodosia Throckmorton books, but I'm beginning to take quite a shine to her series for younger readers, Nathaniel Fludd: Beastologist. More than anything, it's great to see a solid new fantasy series for the second grade crowd. It's a reading level dominated by the Magic Tree House books, which I find a little bland. 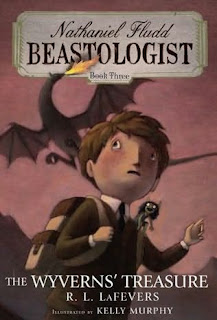 The first two books in this series are The Flight of the Phoenix and The Basilisk's Lair. Nathaniel Fludd is the son of famous explorers who have disappeared and are presumed dead. (But are they really?) His new guardian, Aunt Phil, is so intrepid that her expectations for Nathaniel often fill his timid heart with fear. But somehow, he manages to survive the adventures he's thrown into, especially once he learns that his family is responsible for studying and preserving the world's great mythical beasts. (Nice environmental protection theme there!)

Unfortunately, someone is working against Nathaniel and his aunt, a greedy man from an outcast branch of the Fludd family who also seems to be searching for the mythical creatures, but for nefarious purposes. As The Wyverns' Treasure begins, Nate and Aunt Phil return from their latest adventure, only to discover that their house has been ransacked. Next they receive word from Wales. The wyverns, a kind of dragon, have been living quietly in hiding on the basis of a covenant made with human guardians, but now they're rising up in anger, threatening to fly out and terrorize the countryside. It sounds like that horrid Fludd cousin Obadiah might be causing this new trouble, too. So Aunt Phil and Nate set off again, hoping to calm the wyverns and catch the culprit.

One thing I like about this series is how the author very solemnly presents us with zoological information about the beast in each book. She uses existing information drawn from myths and legends, then builds on it logically, adding further details. For example, Aunt Phil gives Nate a handful of new pennies and tells him to use them to distract the younger wyverns, who like shiny things and are too young to know that they shouldn't take a bite out of a human found wandering through the caverns where they live.

Aunt Phil's near-foolhardy nature makes a nice contrast to Nathaniel's nervousness. It doesn't take a close read to see Indiana Jones in Aunt Phil, especially since these stories are also set in the 1930s. Nate is a kind, appealing boy who keeps trying despite his fears. One of LaFevers' most entertaining characters is Greasle, a gremlin (borrowed from slightly more modern lore, i.e., a famous Twilight Zone episode). Greasle lives on planes, eating oil and spare parts—or sometimes not-so-spare parts. She becomes Nate's sidekick, though Aunt Phil keeps threatening to get rid of her. Here's a passage in which Greasle catches a pigeon, hoping to eat it:

"Stop!" Aunt Phil called out. Nate and Greasle froze. "Planes, trains, and motorcars aren't enough for you? Now you're going to eat my messenger as well?"
Nate and Greasle stared at her blankly.
"That's a carrier pigeon. With a message. See?" She pointed to the small pouch strapped to one of its feet. "Let it go," Aunt Phil ordered.
Greasle scowled. "I caughts it fair and square."
"Now," Aunt Phil said in her most stern voice.

This series offers fun, adventurous fantasy for younger readers, with the storytelling enhanced by Kelly Murphy's cheery illustrations. They're slender books—The Wyverns' Treasure is 154 pages, including Nate's glossary at the back. But that just makes them a more accessible read for their intended audience. I can happily recommend the Nathaniel Fludd: Beastologist books to kids who have run out of Magic Tree House books and are wondering just what to read next!
Note: Visit the author's website for more information.
Also: I requested this review copy from the Amazon Vine program.
Posted by Kate Coombs at 2:44 PM

We are looking forward to this one very much!

Woohoo! I've never heard of these books before, but I'm heading out to look for them. We enjoyed the first... oh, billion... Magic Treehouse books, but I think we're ready to move on!

Oh, good! As you can see, I feel like there's GOT to be more to life than MTH! Off to design a new second-grade fantasy series... :)

Colleen--Another possibility, speaking of sisters, is the Sisters Grimm series by Michael Buckley, starting with The Fairy Tale Detectives.