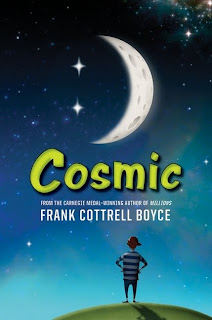 Blogger Elizabeth Bluemle of ShelfTalker (at Publishers Weekly) kindly rounds up the books that have gotten starred reviews in major review sources; I posted about this list 4-5 months ago, but here's her updated version of "The Stars So Far." (Thanks to Betsy Bird of Fuse #8 for the link!) Note that Bluemle provides a list of 6-star books, then 5-star books, 4-star books, etc.

As Bluemle herself explains, "Starred reviews are excellent guideposts, but they don’t tell the whole story, of course. There are amazing books out there that never receive a starred review but are popular and/or critical favorites nonetheless." It's interesting to compare these starred lists to the books that are getting much of the Newbery chatter (see September 18th post below about that). The twain don't always meet. But between the two groups, you can certainly come up with some terrific books, and that's the real point of all this.
Posted by Kate Coombs at 6:52 AM

I love your tagline.

Thanks, Lisa! I'm pretty fond of your books, myself, especially Millicent Min.