A Review of Facing Fire by kc dyer

I'm rather fond of this author's previous book about skateboarder and time traveler Darby Christopher, especially because of its glimpse into the lives of the ancient First Peoples who crossed the Bering Strait to North America. This new book offers us three more slices of history, and middle schooler Darby is just as feisty and appealing here as she was in A Walk Through a Window. 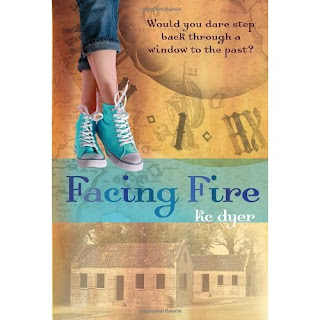 Just don't expect an appearance from Darby's guide, Gabe. Or rather, expect him to show up in a relatively non-helpful way. This time Darby is accompanied by a new guy, a fellow skateboarder named Zander who has even more of an attitude than Darby does.

In her latest adventure, Darby travels from Toronto to Kingston, where she has offered to help Fiona, a friend of her mother's, largely in an attempt to avoid spending all summer watching her baby sister. She is also avoiding dealing with some trouble she got into with her friend Sarah. And once again, a mysterious window at a historical site allows Darby to travel into the past.

Darby winds up at Fort Frontenac in 1758, in the middle of a group of Acadians fleeing a British attack during the Seven Years' War. Though the people she observes can't see her, Darby is still subject to danger, and she barely escapes a fire to return to her own time.

In between texting her friend Sarah, Darby goes skateboarding and meets local boy Zander, who is cutting class. When she and Zander get together at a skate park, she learns that he is Mohawk and has his own interest in Canadian history. Later she and Zander fall into the past together, winding up on board a ship that is transporting two prisoners, an American doctor and a Shawnee boy who is Tecumseh's nephew. Once they get back home, Darby and Zander have some interesting debates about what it means to be Canadian and why Darby, whose ancestors are relative newcomers, should be more capable of time traveling than Zander, who feels he has more right to it. Eventually Darby and Zander go back into the past again, where they witness the near-capture of a runaway slave.

When writing time travel, an author has two basic choices. Should his characters interact with the people in the past or just observe them? Each approach has its strengths and weaknesses, of course. When a character from the present interacts with people in the past, it can make the storytelling more lively; however, it can also distort the history, especially if the focus remains on the time traveler and she affects the events in which she participates.

In the Window books, dyer has gone the other direction, creating characters from the present who mostly observe the past they visit. This keeps the history pure and in some sense mysterious, as Darby must put together what's happening from the bits and pieces she sees and hears. She sometimes does research after she gets home so she can figure out the history she has observed. And really, isn't that what we always end up doing when we study history that goes back more than one or two hundred years? This reminds me of reading Bill Bryson's book about Shakespeare, in which he points out how little we really know, since very few records remain from the 1600s.

Now, dyer balances out her contemporary characters' somewhat passive role as observers of history by giving them other, present-day concerns: Darby is afraid of being blamed for an arson incident with her friend Sarah back in Toronto, while Zander has issues with his heritage and is thinking of dropping out of school. Another minor but intriguing subplot is Fiona's work with water needs on the First People lands.

I find that most time travel books read more like historical fiction and sometimes contemporary realism than fantasy, with the time traveling simply acting as a doorway—or window, in this case—to another era. It's nice to see these historical events taking place in Canada, since my students and I generally only get the American viewpoint. I always tell them that if they were to read about the American Revolution in a British schoolbook, they would get quite a different perspective. Facing Fire made me want to get my hands on more books written locally about the histories of different countries around the world.

Like A Walk Through a Window and the author's Eagle Glen time travel trilogy, Facing Fire brings the past to life, and it slips in a few lessons about life in the present, too. While I missed Gabe, I enjoyed meeting Zander, who is a strong character in his own right. Maybe in Book 3 we can see all three of these kids in one place, or rather, one time!

Note: kc dyer is a member of my small online writing group.
Posted by Kate Coombs at 12:59 PM