A Review of Stolen Child by Marsha Forchuk Skrypuch 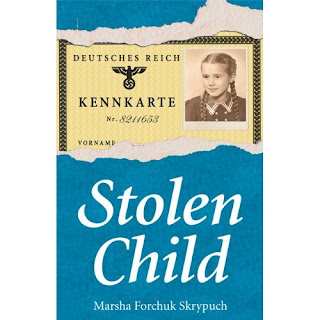 To tell you the truth, I've been waiting to review this book till it showed up on Amazon (U.S.), but it still isn't there... Finally I asked the author what's up, and apparently there's some businessy situation about rights which means that this won't be happening any time soon. So if you search for the book on Amazon (U.S.), you'll only find a couple of used copies. The trick, it turns out, is to look it up on the Amazon Canada website.

You've probably heard of Hitler, the Nazis, and World War II. You're no doubt familiar with the terrible events of the Holocaust. But have you heard about the Lebensborn Program? It's yet another nasty thing the Nazis did in their push for Aryan purity. Basically, they sorted through children in villages throughout Eastern Europe, sometimes using women called the Brown Sisters to do the job. Their goal was to find kids who looked Aryan and take them away to be raised as Germans. As Skrypuch explains in her author's note:

The stolen children were put through tests, including the measurement of sixty-two body parts, to ensure that they were "racially valuable." Any tiny shortcoming meant the difference between an adoptive home and either a concentration camp or a slave labour camp.
The final round of racially valuable children was then sent to special homes where the children were brainwashed into thinking that they were German. Some were told that their parents were dead, or had only been spies and liars. Children who were still young—under the age of eight—were then placed with their new Nazi families. Older children were put in Nazi Youth boarding schools or fostered out.

Skrypuch presents the story of one such child in a unique way, showing Nadia after she has been essentially rescued by a couple who takes her to Canada to start a new life. But Nadia is troubled by flashbacks to her life as a German child, and her classmates call her Nazi because of her accent. Who is she really? It takes a series of events and memories for Nadia to remember her life in Germany, let alone the life she had when she was very small. In a way, this is the story of a girl who is suffering from post-traumatic stress syndrome and must be deprogrammed. (Her kind new guardians do not actively try to bring this about, as they have no information on how to do so.) Just keep in mind: Nadia's struggle to adjust to her life as an immigrant in a new country would be difficult enough without her astonishing and painful history as a stolen child. Skrypuch makes Nadia's extraordinary story seem ordinary, writing it in a way that the book will be accessible to middle grade readers. You will have to judge for yourself whether your child is ready for the mature themes of war and kidnapping, of course.

In a companion book due out in a year or so, Skrypuch will give us the story of Nadia's older sister, who was made into a slave laborer.

Sadly, many of the children in the Lebensborn Program never recovered their original identities. According to Skrypuch, not only did the Nazi destroy the records of these children when they saw that they were going to lose the war, but "most of the stolen children refused to leave their German parents, even if their birth parents were still alive and could be located."

I'll close by telling how the author found out about the Lebensborn Program:

I first heard about [it] from my mother-in-law, the late Lidia (Krawchuk) Skrypuch. The Nazi front passed through her city of Zolochiv twice and soldiers took over her house. She and her parents became prisoners in their own home. One day she overheard bits of conversation from the Nazi officers. Something was happening at her school the next day. Her parents kept her home. When she did go back to school, all of her blond and blue-eyed female classmates had disappeared.

As in her previous books, Skrypuch has a way of making historical events present and personal. She has received a number of awards for her writing, including the 2008 Order of Princess Olha from the President of Ukraine. You may have trouble tracking down Stolen Child, but I suggest you try.

Note for Worried Parents: This material is handled gracefully, but there are some scary moments, as when Nadia recalls her kidnapping and brainwashing. The whole book is rather intense; while it is written for readers ages 9-12, some young readers may be more ready for the story than others.
Also: Marsha Skrypuch is a member of my online writing group.
Posted by Kate Coombs at 12:42 PM