A Review of Pathfinder by Orson Scott Card

In this new YA book from another well-known fantasy writer, we meet a boy named Rigg who has been raised in the forest by a man he calls Father. In addition to learning to track and hunt, Rigg has learned—apparently by the Socratic method—a lot of other things, including how to handle himself with people from differing social strata, depending on what he wants. Most of the information seems pretty useless to Rigg, but the time comes when he suddenly has to apply a great deal of it. After Father is fatally struck down by a tree in the forest, he sends Rigg away, telling him to sell their stash of furs and go in search of his sister. Of course, Rigg didn't even know he had a sister till that moment. 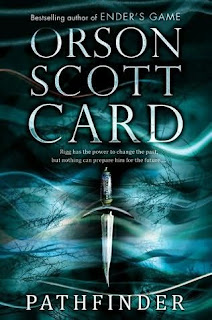 As he sets out, Rigg nearly falls from a dangerous river crossing above a waterfall, attempting to save a younger boy who walks in exactly the wrong place. Unfortunately, Rigg's rescue efforts are hampered by his gift for seeing the paths of the past as colored trails winding along the ground or even through the air. This time, his gift brings him into actual contact with someone from the past, who inadvertently interferes with Rigg. The boy's brother, Umbo, at first thinks Rigg has killed the boy deliberately, and Rigg has trouble convincing the villagers not to kill him in turn. He also loses the entire load of furs. But a woman who was a friend of his guardian gives him a secret stash of jewels and some coins, as well as the information he needs to seek his sister, then sends him on his way. Umbo follows him, and the two country boys set off for the city. It turns out Umbo has his own gifts relating to time and space, and he and Rigg begin to experiment with combining their abilities.

Rigg's story is interspersed rather surprisingly with the tale of a spaceship carrying refugees from earth, almost all of them in suspended animation. The one human who remains awake works with sophisticated androids to make decisions about the mission. It shouldn't take long for you to realize that Rigg's abilities have something to do with the spaceship, which runs into trouble that causes it to split into different causalities and move backwards through time.

Quibbles? Rigg seems far older, more sophisticated, and clever than he should at times. And I wasn't entranced by the various long conversations about the implications of time travel, though I realize some readers will love this stuff. (In his afterword, Orson Scott Card kindly clarifies what happens with the spaceship and how it affects the narrative.) Then again, it is through those conversations and their experiments that Rigg and Umbo discover ways of using their abilities to evade their enemies.

This becomes necessary when Rigg reaches the city, only to find himself at the mercy of political machinations that seem likely to destroy him. Yet in the midst of all this time travel and politics, what ends up mattering most in Pathfinder is that Rigg has two loyal friends—Umbo as well as Loaf, an innkeeper and former soldier who escorts the boys to the city. The interplay between Rigg and Umbo is especially nice.

"Share the sausage. Here's what Nox gave me. Halves on everything."
"I know the traveler rules," said Umbo.
"This is your half."
Umbo looked from half to half.
"It was even when I divided it," said Rigg.
"It's still even as far as I can tell. Haven't you eaten?"
"I've eaten as much as I want. I want this food to last."
"What good is it to make food last? So the animals who find your starved corpse will have something delicious to eat and leave your flesh alone?"
"I had what I need," said Rigg. "We often go for a few days on short rations, just for practice. You get so you kind of like the feeling of being hungry."
"That is the sickest thing I've ever heard," said Umbo.

I suspect that as many of Orson Scott Card's adult fans as teens will want to read Pathfinder and will then look forward to the next book. Because even though this story comes to a satisfying stopping place, it also leaves us with the promise of further complications. And Orson Scott Card, like Charles de Lint, is a practiced storyteller with a knack for fresh premises and plot twists, as anyone who has read and loved Ender's Game can attest.
Posted by Kate Coombs at 7:28 PM