It's about time! Those of us who are endlessly impressed by Megan Whalen Turner's writing in her Queen's Thief series have been a little frustrated this year as various committees have said of her latest, "Yeah, the book is very good, but it's part of a series, and since we're not convinced it can stand alone, we won't select it for this prize" (to, um, paraphrase). 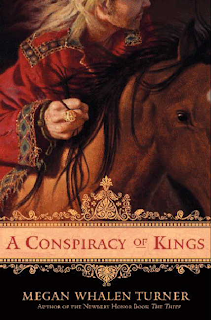 So if a book from a series is waaaay better than any of the standalones, it's nevertheless out of luck, essentially by default?

But the most wise L.A. Times Book Prize committee rose above all that and chose A Conspiracy of Kings for its best Young Adult book of 2010, as announced this past weekend. Hooray!

Congratulations to the marvelous Ms. Turner, whose craftsmanship, subtlety, and world- and character-building enchant readers and fellow fantasy authors alike.

Of course, A Conspiracy of Kings did get five starred reviews! I will just add that this series is so intelligent that some people say the books are too smart for kids, to which my response is, "There are some pretty smart kids out in Readerland."

Note for Worried Parents: Book 1, The Thief, a Newbery Honor winner, is considered (upper) middle grade fiction, but the rest of the series is being marketed as YA (for teens). I know a lot of adults who also read the books. Kids who like sophisticated fantasy by writers such as Diana Wynne Jones, Susan Cooper, Terry Pratchett, N.D. Wilson, and J.R.R. Tolkien should give these a try! Book 2 does begin with a rather upsetting (violent) event, but the series builds from there, using that pivotal event in thought-provoking ways, so see what you think based on your child's maturity.

See my review from last year here.
Posted by Kate Coombs at 6:46 AM

That's great news. And I'm glad you said what you said in regard to the people who think Megan's series is too "intelligent" for kids. Grr. Remarks like that seem to feed into the prejudice toward children's literature.

YES! YES! And YES! All of that exactly. I agree 110% with everything you said. I am so happy this book got some much deserved love.

As regards your note and that list of authors: I read the Queen's Thief books in the first place because N.D. Wilson recommended them on his blog.

Hooray, hooray, hooray! I am DELIGHTED to hear this news. MWT is such a brilliant writer.

And good lord, whyever shouldn't YA books be intelligent? I wish more of them were!

And, speaking of intelligent, I just read Troll Blood (at last; darn that towering TBR pile!). I love the way you blend history and the fantastic. Go, Peer!

For the rest of you, note that you can now get Katherine's troll trilogy in one volume, West of the Moon.

Thanks, Kate--I want to buy each of my kids a last-day-of-school gift of summer reading, and I think you've helped me find something Daisy hasn't read yet!

And of course, since I pretty much only have time to read what Daisy reads, I'm looking forward to the Queen's Thief series too.

Heidi, you're in for a treat! I will say that The Thief does a bit of a slow build, but it's well worth it. Book 2--The Queen of Attolia--starts with a shock; I'm a real softie and it upset me quite a lot, but then, the whole thing develops amazingly from there... (You might want to take a look, though; how old is Daisy?)