A Review of The Penderwicks at Point Mouette by Jeanne Birdsall

I don't know that we realize how hard family books are to pull off until we see it done really well. Those who can perfectly capture sibling interactions, for example, are a rare breed. This explains all the acclaim for Jeanne Birdsall's Penderwick books, and why I was so very happy to get my hands on the third installment. It also explains why the Penderwicks made my list of Top 10 Literary Families. (Scroll down through my March awards post to see the full list.) 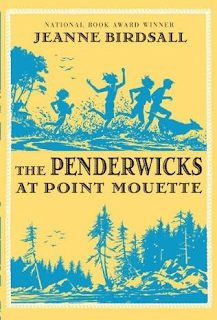 show on the road this go-round, and she shakes things up a bit while she's at it, sending the ever-so-capable Rosalind off on a summer vacation with her friends and appointing Skye as OAP or "oldest available Penderwick"—meaning the sibling in charge, particularly of lively five-year-old Batty. Only Skye's notes on the care and keeping of Batty get wet, so she can barely read them. Why on earth would she need to blow something up?

The degree of angst Skye brings to her new responsibilities is a hoot, building to a point where good friend Jeffrey must intervene and relieve her of her office, at least for one night.

Also funny is writer sister Jane's determination to study Love, leading her into the depths (and heights) of a crush on a laconic, bewildered, and unintentionally heartless skateboarder named Dominic. Jane tries to make him into one of her literary crushes, say, Peter Pevensie from the Narnia books, but it's hard going. Take a look at their towering romance, which mostly consists of Jane sitting on a bench at the park watching Dominic ride his skateboard:

...they weren't really walking together, because Dominic wasn't walking at all, really—he was on his skateboard, either ahead of her or behind, or making large circles around her. She didn't care, not really, trying to thrust away the suspicion that Peter Pevensie would never make circles around a maiden. You're being disloyal, she scolded herself, and anyway, there weren't any skateboards in Narnia. Besides, soon they reached French Park, and Jane was able to sit down on the bench, and although Dominic continued to ride in circles for a while, she could now close her eyes to better picture him as a noble presence worthy of her love, and by the time he sat down beside her, she was feeling steadier.

"I have many things to tell you, Dominic," she said.

"Yeah." Dominic shuffled his feet. "Me too. I mean, I have something to ask you."

"You do?" This was a surprise. Until now, asking personal questions had not been one of Dominic's skills. "You go first, then."

"Okay, here's my question." Dominic shuffled his feet again, then cleared his throat. "Can I kiss you?"

"Excuse me?" Jane was so surprised, she jumped off the bench. Did he love her, too? She hadn't hoped for as much.

"It will be a short, little kiss." He looked sternly out to sea. "Hardly a kiss at all."

She sat down again. "Oh, Dominic, love has no measure."

A quick kiss, and Dominic takes off on his skateboard, leaving Jane dizzy and blissful, as well as filled with determination to write a truly marvelous love poem for her swain...

Yep, The Penderwicks at Point Mouette is that funny, so funny that I forgive Birdsall for reminding me I don't speak French and therefore don't know how to pronounce Mouette—or is it one of those Americanized pronunciations, the way people have bowdlerized half the Spanish names in Los Angeles? (I just checked: the French would be moo-ET, or almost mwET. It means "seagull." And I am not kidding when I say I started writing this paragraph thinking, "Why couldn't she just have named it Seagull Point or something?")

Another nice story strand is that Jeffrey and Batty start hanging out with Alec, a musician who has a house just up the beach. Jeffrey is a musical protégée and loves spending time with Alec's piano, but the real surprise is Batty, who turns out to be musically gifted. Except—her sisters simply refuse to acknowledge this. Their reasoning is that there's no such thing as a musically inclined Penderwick, so they brush off Batty's music talk.

More dramatic, at least early in the book, is when Aunt Claire hurts her ankle and gets a brace on it. Skye doesn't want Rosalind or her parents to worry, so she downplays the situation. But her own worry ratchets higher and higher as she tries to fill her role of OAP under difficult circumstances and pretty much loses it.

We also get moose watching, a golf ball collection, a concert played for seals, and a storm or two, not to mention a secret revealed, one that changes more than one life.

A couple of key plot points rely heavily on coincidence, but I found I didn't care a bit because they're such great coincidences. Which just goes to show that you can break the rules of literature with abandon as long as you can sell it!

I am crazy about Hilary McKay's Casson family, but I have to admit: the Penderwicks are just as lovable. They are also a bit less edgy, and therefore perhaps better suited to younger middle grade readers. No wonder they've been compared to the Melendys.

If you haven't read the three Penderwick books, you've been missing out on a deeply satisfying experience!

"A couple of key plot points rely heavily on coincidence, but I found I didn't care a bit because they're such great coincidences. Which just goes to show that you can break the rules of literature with abandon as long as you can sell it!"

YES!!! In the hands of a lesser author those coincidences would have ruined the story, but they didn't. They just seemed natural.

I have to say I love the Penderwicks a teensy bit more than the Cassons. I was a little wary of this one because Rosalind has always been my favorite sister (I can relate most to her), but I loved the book even though she wasn't in it. And found myself loving the other girls more too. And Batty really came to be her own unique character in this one, not just the cute little one.

Can you tell I really loved this?

It's a wonderful book--it made me so happy to read it! And I adore the Penderwicks; comparing them to the Cassons is really kind of an apples-and-oranges thing, frankly.

I liked your reviews this week, by the way. I thought, We're reading the same things!

Surely it's pronounced moo-ETTE in French? If not then my French teachers lied to me about some stuff. :p

I am so excited to read this book! I wish Jeanne Birdsall would write a dozen Penderwick books, but I understand she has planned only five, alas, alas. They are so charming and lovely, though I feel far less insane than the Casson books.

Jenny--Oh, you're right! I was misled by the source I visited on the Internet. I checked again and found some audio from actual French people saying it. Much better.

And yes, that's a good way to differentiate them from the Casson books. But only 5? Sigh.

Love the post! I haven't read that book yet, I reserved it from the library and am waiting for it to come. It sounds great! I have read the other Penderwick book, and i absolutely LOVE the Penderwicks. I can't wait to get this one! For more kids book reviews on books like this one, please visit my blog: graciesbookreviews.blogspot.com

Hey Grace, thank you! Of course, you're going to love Book 3 just as much of the others, or maybe even more. I have to say, it's so nice to meet a book-crazy young blogger! :)

Thank you, I hope that someday my blog will be as great as yours! Reading is the best, it can take you places that you never even dreamed of going.