A Review of The Girl Who Circumnavigated Fairyland in a Ship of Her Own Making by Catherynne M. Valente

It didn't surprise me to see that the jacket quote on this book is from Neil Gaiman, who says, "A glorious balancing act between modernism and the Victorian fairy tale, done with heart and wisdom." After all, Valente's book reads like a cross between Alice's Adventures in Wonderland and Gaiman's own Coraline. (Which is ironic, since Coraline has been compared to Alice's Adventures in Wonderland. But structurally, Valente's book is really much more Alice-like than Coraline is.) 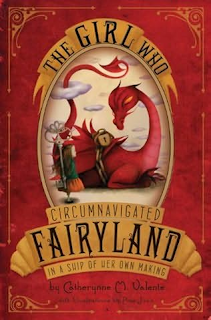 In case you weren't aware, Valente is the writer of dark, beautifully strange and successful adult fiction, most notably The Orphan's Tales: In the Night Garden and Palimpsest. She wrote this, her first children's book, in a series of crowd-funded online posts, reminding me of the way her Victorian predecessor, Charles Dickens, first wrote his books—as magazine serials. Then The Girl Who Circumnavigated Fairyland in a Ship of Her Own Making got its due by winning a 2009 Andre Norton award. In a publishing story for the 21st century, the book contract followed.

The book itself is mostly not 21st century in tone, except for an overall stylistic cleanness and a subtle tongue-in cheek feel. Valente's ornate approach and her love of props like smoking jackets and velocipedes hark to the steampunk subgenre (or "mythpunk," as she has half-jokingly called her work). In any case, when young September runs away from the dullness of washing her mother's teacups and playing with her family's "small, amiable dog," she does so with a fine heartlessness that the author informs us is typical of children:

One ought not to judge her: All children are heartless. They have not grown a heart yet, which is why they can climb tall trees and say shocking things and leap so very high that grown-up hearts flutter in terror. Hearts weigh quite a lot. That is why it takes so long to grow one. But, as in their reading and arithmetic and drawing, different children proceed at different speeds. (It is well known that reading quickens the growth of a heart like nothing else.) Some small ones are terrible and fey, Utterly Heartless. Some are dear and sweet and Hardly Heartless at all. September stood very generally in the middle on the day the Green Wind took her, Somewhat Heartless, and Somewhat Grown.

Yep, there's an intrusive narrator commenting along the way. This technique sometimes backfires or is overdone, but here it feels completely of a piece with the rest of the Victoriana.

But on with our plot: A girl named September agrees to be taken to Fairyland by the Green Wind, a Harsh Air who rides the Leopard of Little Breezes. He issues various warnings, e.g., "Obviously, the eating or drinking of Fairy foodstuffs constitutes a binding contract to return at least once a year in accordance with seasonal myth cycles." None of this deters September, who is, after all, wearing an orange dress.

She liked anything orange: leaves; some moons; marigolds; chrysanthemums; cheese; pumpkin, both in pie and out; orange juice; marmalade. Orange is bright and demanding. You can't ignore orange things. She once saw an orange parrot in the pet store and had never wanted anything so much in her life. She would have named it Halloween and fed it butterscotch. Her mother said butterscotch would make a bird sick and, besides, the dog would certainly eat it up. September never spoke to the dog again—on principle.

Hmm, I'm only on page 6, and I keep finding things I want to quote you. This is a very good sign, though not a very good way to write a book review (I remark, in rather Valente-ish tones). Suffice it to say that September goes on to meet three witches, one of whom is a wairwolf and the husband of the other two. She agrees to retrieve a magic spoon for one of the witches, mostly because she wants a storybook-type quest. She next meets a wyvern with its wings chained who becomes a quest companion. But even as this author seems to do something ordinary when it comes to fantasy, she doesn't: The wyvern turns out to be the son of a wyvern and a library. His name is A-Through-L, though he lets September call him Ell.

September and Ell come across a golem made of various kinds of soap and nearly get eaten by Glashtyns while crossing the river. September does lose her shadow, bargaining for the life of a Pooka child who looks like a jackal cub. Then she reaches the capital, and rather than obtaining the magic spoon, she finds herself sent on a dire quest by the terrible Marquess, the dictator of Fairyland who at first glance looks like a little girl crowned in ringlets. September does manage to rescue a marid boy named Saturday on her way out of town.

Of course, the Marquess has given September a deadline, and the best way to cover a lot of ground fast is by lassoing a mount from a herd of migrating velocipedes. "Remember, they are fast and tall and vicious! Many have perished or, at least, been roundly dumped off and bruised in the attempt to travel by wild bicycle." These dangerous, magnificent beasts are one of Valente's best creations, as is the woman who regularly rides with the herd, Calpurnia Farthing.

September's adventures grow still more dangerous after she reaches the Autumn Provinces. I will give you one more passage as Valente's narrator introduces these lands:

I suppose you think you know what autumn looks like. Even if you live in the Los Angeles dreamed of by September's schoolmates, you have surely seen postcards and photographs of the kind of autumn I mean. The trees go all red and blazing orange and gold, and wood fires burn at night so that everything smells of crisp branches. The world rolls about delightedly in a heap of cider and candy and apples and pumpkins, and cold stars rush by through wispy, ragged clouds, past a moon like a bony knee. You have, no doubt, experienced a Halloween or two.

But, we learn, our autumns are nothing more than pale imitations of the richness of autumn in Fairyland. (Ahem: "a moon like a bony knee"? I am in awe of that metaphor!)

Only autumn is the harbinger of winter, and therefore of chilly death. Following a feast with some slightly unnerving spriggan scholars, September ventures into the woods to find what the Marquess has sent her for, a treasure in a glass casket. There September meets her own death, a small creature at first. Until it grows bigger.

That's a taste of what's in this book, but you'll find so much more. Valente's Fairyland is both beautiful and dangerous, a place where life and death rub shoulders more often than you might wish. September has blithely chosen the road to heartbreak, and she certainly has her heart wrenched a time or two in this story. There is a dark streak in the book, the reason I mentioned the Coraline comparison above. Valente seems very interested in the idea that "the dark and the light go together," as my mother likes to put it.

Make no mistake, blood is required in this book. But then there is a magic key that flies around trying to catch up with September throughout her journeys, and it is nothing less than a shining scrap of winged hope. Which makes September something of a Pandora, I think.

Some of the edgy touches that crop up in Valente's tale are presented tongue-in-cheek. For example, there's a running joke about how September misunderstands the clause about not eating fairy food. ("Witch food must be okay! And dragon food! And...") We learn, too, that human visitor September gets classified as Ravished, kind of like Persephone, rather than as a changeling or a child who has merely stumbled through a hidden gate (or wardrobe!). I suppose it's technically because the Green Wind is bit of a rogue and lures her away, though that's certainly the extent of it.

Speaking of ravished, what ravishes me literarily is freshness, or what I call the F Factor. A book that's pleasingly new in its style, voice, description, language, metaphors, plot, and/or characters makes me swoon every time—and The Girl Who Circumnavigated Fairyland in a Ship of Her Own Making qualifies on all counts.

Note: The book is illustrated by one of my favorite illustrators of all time, Ana Juan. And check out the very cool book trailer.

Note for Worried Parents: The book is a little dark, but it's no stronger than Coraline and is much more of a fantasy story than a horror one. Some mournfully deep/painful notes are sounded in spots; however, younger MG readers might miss that stuff altogether, to tell you the truth!
Posted by Kate Coombs at 5:40 PM

Labels: Catherynne Valente, dark fantasy, fairies, fantasy, steampunk, The Girl Who Circumnavigated Fairyland in a Ship of Her Own Making, Victorian

Great review. I love books with an old-fashioned feel, and it sounds like this one will be right up my alley!

Another excellent review of this book that's making me more and more curious. Both Ana and Thea of The Book Smugglers gave it a rating of 10. I was lucky enough to download a free copy when it became available in the website (although no illustrations on that) so I'm hoping that I could read this soon.

Ruth and Chachic--Thanks! I think you're really going to like it!

That quote from page 6 completely sold me. I think I may just love this.

Fascinated to learn what you thought of this. It sounds a touch conscious, but very rich. I love the paragraph you quote about autumn. Sounds like one I'll have to get.

Katherine--That's a good way of putting it, rich and (self)-conscious. The latter is deliberate and therefore amusing rather than off-putting, to my way of thinking. Like a good in-joke.

This is an absolutely brilliant, and sometimes painful book. Valente outdid herself as usual.

Lin--Hear, hear! I haven't read much of her adult fiction, but I've got my eye on The Orphan's Tales now.

My daughter and I read this for our nightly storytime. It is brilliant! I loved the language and the characters!

PR, what a great book to share with your daughter! As you say, the combination of the language and the characters is just marvelous.