Troll Blood West of the Moon from Katherine Langrish

I read Troll Fell and liked it so much I kept an eye out for a sequel. Got it: Troll Mill. And then there's Book 3 in this trilogy, Troll Blood, which sends young Peer a-viking clear to the New World. Fortunately for readers of historical fantasy, the Troll Trilogy is now available in one volume, West of the Moon.

Katherine Langrish's trilogy is just as much steeped in folklore as it is in the realities of life in Norway several centuries ago. The trolls are particularly gruesome, for those of you who want a shiver with your adventure.

—In Troll Fell, Peer Ulffson is orphaned and sent to live with his horrible uncles, who concoct a plan to sell him to the troll king as a wedding gift. With the help of his friend Hilde, a cranky Nis (think brownies or even Dobby the House Elf, only not), and possibly the dubious, terrifying Granny Greenteeth, Peer can find out just what his uncles are up to, especially when their plan changes unexpectedly. You've always wanted to attend a troll wedding feast, haven't you? 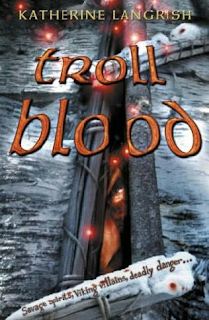 vil uncles might be back, and what's to be done with a baby that appears to be half selkie? New encounters with trolls plus Peer's changing feelings toward Hilde occupy this second volume, which may be even better than the first.

—Troll Blood takes Peer and Hilde across the sea in a Viking boat, led by Gunnar and his son Harald, whose violent ways will endanger them all, especially when they run afoul of the natives in Vinland (North America). Langrish impressively weaves Native American mythological creatures into this new tale of her brave young Norse twosome. And for the romantics among you, Hilde finally realizes that Peer is an amazing guy (though not till late in the book, mind you)!

Langrish makes her adventures feel as real and unpredictable as everyday life. In Troll Blood, the Norsemen are mostly disdainful of the Native Vinlanders, whom they call Skraelings, but an abandoned boy finds out otherwise, as does Peer when he runs into terrible trouble. Harald's murder of two young native men on a hunting expedition comes back to haunt him in the same way the ghost of a dead seafarer haunts his father. And we get an interesting comparison between a Viking berserker and a creature from Native American legends, a version of the wendigo.

Perhaps most intriguing of all is the author's handling of the woman with the titular troll blood, Astrid. A cold, selfish girl, Astrid is eventually revealed as a rich and troubled character. There's a dimensionality to the interactions of so many of these characters when it comes to their friendships, their family lives, their goals, and their struggles. It all adds a satisfying depth to Langrish's work. 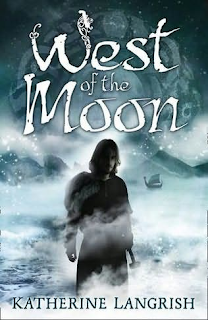 While Hilde makes a gutsy companion in the Troll Trilogy, Peer is the character whose perspective dominates the books, and he is a thoroughly likable boy, full of equal parts determination and self-doubt. We watch him grow up in these three books. In fact, Troll Blood might also be described as Peer's coming-of-age story. Here's a glimpse of him the morning after he has volunteered to go to Vinland only because Hilde is going:

Slowly he remembered. He and the twins were sleeping in the cowshed to leave more room for the guests. "Do you mind, Peer?" Gudrun had whispered last night. He'd minded very much, but of course he'd lied and said he didn't.

He remembered more, and a pit of dread opened in his stomach. What had he done? Had he really promised to go away for an unknown period of time, on a strange ship, to a strange land? Spring was on the way. He'd been looking forward to seeing the lambs being born, watching the barley come up, rowing out of the fjord with Bjorn and Sigurd to gather seagulls' eggs from the islands. Now all that would go on without him.

Of course, the star of the show in this trilogy just might be the Nis, the odd and clever little creature who sometimes scolds and sometimes helps our heroes. Plus there's Peer's dog Loki, who's always up for some troll fighting.

Langrish's books are rich in language, adventure, and fantasy. It's particularly nice to read historical fantasy that's set somewhere other than the British Isles. Norse folklore is a real treasure trove, as the Troll Trilogy demonstrates. You will also get a strong sense of what it was like to live in Norway all those centuries ago, from the building of sod houses to the snap of the sails in the middle of a seemingly endless ocean.

If you missed these books the first time around, you're in for a treat with West of the Moon!

Note for Worried Parents: These are middle grade books, but they're on the older end, mostly because they're sophisticated in terms of storytelling and character development. They include kidnapping, murder, and peril, along with some monster-inflicted gore. They also have teen attraction and jealousy in Book 3.

True confessions: I missed West of the Moon's blog tour a few months back. Oh well—better late than never!

See Langrish's excellent series of blog posts from fantasy authors talking about their favorite folktales. Here's the first one, but look for all 21.
Posted by Kate Coombs at 6:14 AM