A Review of Jane Austen: A Life Revealed by Catherine Reef

Reading this book reminded me just of my favorite biography of Shakespeare, Bill Bryson's Shakespeare: The World as Stage. In a slim volume, Bryson basically explains that we know hardly anything about the bard himself. He provides the scraps of information we do have plus some nice historical context, then spends the rest of the book debunking common assertions that many believe to be facts. For example, it turns out none of the supposed portraits of Shakespeare can be authenticated in the least.

Even though she liv 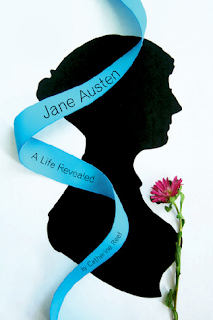 ed a few hundred years later, when better records were kept, Jane Austen left behind surprisingly scant information other than her novels themselves—though heaven knows, we're all grateful for that!

Still, Reef stitches together what is known and creates a surprisingly pleasing piece of needlework. We learn about the various members of Austen's family, things she said as quoted by family members, places she moved and when, and impressions of her from cousins and acquaintances, including those who disliked her.

It would have been wonderful to have her letters, of course, but her sister and other family members deliberately destroyed them after her death.

The author points out that Jane's books seem to give us a different impression of the woman than her family's descriptions of her, but then, there's a long tradition of not speaking ill of the dead. And perhaps Jane saved her finest, even edgiest wit, for her books rather than her conversations. Here's the passage I'm thinking of:

Her family described Jane Austen to the world as they wanted her to be remembered. "Her sweetness of temper never failed," wrote her nephew James Edward Austen-Leigh. "Faultless herself, as nearly as human nature can be, she always sought, in the faults of others, something to excuse, to forgive or forget," wrote her brother Henry. Added one of her nieces, "I do not suppose she ever in her life said a sharp thing."

Not ever? It is hard to believe that such a sweet, forgiving creature would write lines such as these:

I do not want people to be very Agreeable, as it saves me the trouble of liking them a great deal.

For what do we live, but to make sport for our neighbors, and laugh at them in our turn?

Mrs. Allan was one of that numerous class of females, whose society can raise no other emotion than surprise at there being any men in the world who could like them well enough to marry them.

The other portraits Reef paints are of Austen's books—plot summaries, when each was written, what Jane said about them, if anything, and comments made in family correspondence about how the writer's nearest and dearest felt about each one. For example, Reef tells us what her family thought of Austen's most universally admired book. Recall that in Austen's day, it was considered slightly scandalous for a woman to write a book, so it was usually kept quiet, with the book being published under a pen name.

The Austens all liked Pride and Prejudice. Jane read the book aloud to her niece Fanny Knight, who was often at Chawton. "[Aunt Jane] & I had a delicious morning together," Fanny noted in her diary. Charles Austen wrote that some of his naval-officer friends had read and enjoyed it. Jane tried to confine knowledge of her authorship to family and close friends, but word was getting out. "The Secret has spread so far as to be scarcely the Shadow of a secret now!" she wrote to Frank Austen. Their brother Henry had the toughest time keeping mum. More than once, Jane continued, Henry has heard people praise Pride and Prejudice, "& what does he do in the warmth of his Brotherly vanity and Love, but immediately tell them who wrote it!"

Readers who are familiar with Austen's work may feel impatient upon encountering Reef's summaries of the novels, but the intended teen audience is likely to appreciate the way these tie the chronology of Austen's life as a writer together.

Reef also includes a number of relevant images, ranging from the only known portrait of Jane (supposedly a poor likeness) to a still from the Keira Knightley P&P. The author threads her account with notes about the culture and the era, all of which make it that much easier to understand Jane. She explains, for instance, how much the Georgians loved Bath—although Jane did not. And she describes the etiquette required from a young woman dealing with a suitor before noting that "Jane and [one-time suitor] Tom skirted the rules of decorum, attracting the attention of their elders."

I very much enjoyed getting a better picture of Jane Austen, the person, as I read Catherine Reef's clear, pleasant account (155 pages plus references). For anyone who loves Pride and Prejudice—the book or the movie—and certainly for the older child or teen doing an author report on this famous writer, Jane Austen: A Life Revealed, is a book worth reading.
Posted by Kate Coombs at 5:56 AM