A Review of The Silver Bowl by Diane Stanley

There's a touch of Upstairs, Downstairs in this book about a roughly raised poor girl who is sent to the king's castle to work as a scullery maid when she is only seven. Little by little, she learns to get along with the castle staff and do a good job. Her one encounter with royalty makes it clear that princes are snobs. But she rolls up her sleeves and gets back to scrubbing the pots, encouraged in her endeavors by her friend Tobias, the donkey boy. In time Molly is promoted to silver polisher, and her life path seems plain. She ignores the fact that she sometimes sees visions of people's deaths, telling herself she simply imagined them. 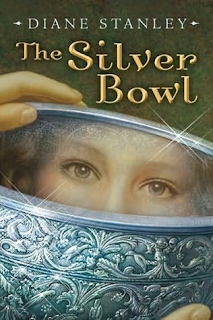 Except—it turns out the royal family has been cursed, and the irrepressible Molly learns she has a strange connection to the events of the cursing. But first the king and his sons suffer greatly, until the entire castle worries what might happen next. And Molly starts seeing more visions in the great silver bowl she has been assigned to polish by Thomas, the keeper of the castle's silver. Molly had believed what she was told as a child, that her mother was crazy, but was she really just a witch? And is Molly a witch, too?

When things get bad for Alaric, Molly and Tobias take a series of huge risks to protect him. I like the way their cleverness and practicality makes them perfectly capable of handling a horrible situation. Under pressure, Molly and her friend's qualities shine like polished silver.

Part mystery, part fairy tale, part reconciliation of class differences, The Silver Bowl is altogether satisfying as the pieces come together. Molly uses her visions from the bowl to help solve the mystery, though she has difficulty figuring out who the true villain might be, to her great peril. Fortunately, Tobias is there to help, and even Alaric begins to contribute usefully and a bit more humbly to their plans. Stanley builds suspense as Alaric becomes the last royal standing and his common-born friends turn out to be the only ones capable of saving his throne from his greedy cousins and the shadowy figure of the curse-maker.

Here's an excerpt from a scene early in the book, when Tobias takes Molly upstairs in the castle:

"We must be silent as ghosts, Molly. And if one of them should come into the room, look down in a very respectful manner, and do not meet their eyes, for they don't wish to be reminded we are about."

"Why? If I had a castle full of servants, I'd be glad to be reminded of it."

"Well, they are not. We are as common as lice to them, and just as interesting."

I enjoyed the interactions between Molly and Tobias, which ripen rather unsurprisingly late in the book into romance, though that's not a major focus. Stanley does leave the door open for a sequel featuring these two characters.

I wasn't quite sold on the denouement, but for the most part, this book flows nicely. And of course, Alaric learns his lesson as both his life and his kingdom are saved by two of his lowly servants. Yet Diane Stanley's message doesn't distract from the sweep of her storytelling in this well-written fantasy. I recommend it to fans of books like Gail Carson Levine's Ella Enchanted, Shannon Hale's Princess Academy, and Jessica Day George's Princess of the Midnight Ball.

Note for Worried Parents: The Silver Bowl is being marketed for teens (YA), perhaps because of a handful of grisly deaths and some peril, along with the eventual ages of the protagonists, but it reads as upper middle grade (MG) to me.
Posted by Kate Coombs at 6:27 AM

This sounds right up my ally!

Wow! This book sounds good! I put it on my wish list and ordered a sample of it for my Kindle.

Thanks for the great review!! I bought this for my Kindle the other day because Stanley wrote it, and I liked the plot. Now I know that I made a good choice!