A Review of The Inquisitor's Apprentice by Chris Moriarty

Picture Sherlock Holmes and the Baker Street Irregulars... Now plop them into New York City, make the Irregulars into a rich girl and a poor Jewish boy, and add a generous dose of magic. Nope, still not a good enough analogy. But it leads you in the right direction, where you'll find Sacha Kessler, a boy from an alternate version of New York's Lower East Side in the days of Thomas Edison, who is a key character in the story. (Hmm. Perhaps this author's last name inspired me to think of Sherlock.) 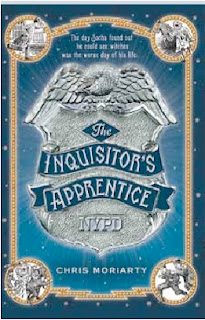 Chapter One is titled with precision: "The Boy Who Could See Witches." When Sacha blurts out that he can actually see the magic created by Mrs. Lasscha in her bakery, he is caught by a New York Police Department Inquisitor, who proceeds to recruit him. Not that he has much choice! Sacha has to take an IQ (Inquisitorial Quotient) test, which confirms his magical ability. Sacha finds himself apprenticed to an odd, colorful detective named Maximillian Wolf. Here's the detective:

In a city like New York, charm was cheap. Any shopgirl or salesman could buy a little glamour to help win the next sale or just get that extra edge it took to get ahead, and most did. It wasn't exactly legal, but it worked. And New Yorkers were too ambitious to turn down anything that worked.

But Inquisitor Wolf didn't seem to think he needed that kind of help. In fact, he seemed to go to great lengths to be as unglamorous and unmagical as possible. His long, lanky legs were encased in baggy trousers that had never seen the inside of a tailor's shop, let alone a fitting spell. His jacket hung off his bony shoulder like a scarecrow's sack. His hair looked like it hadn't been brushed for weeks. His spectacles were covered with smudges and fingerprints. And his dishwater-gray eyes wore a sleepy, absentminded look that seemed to say Wolf was still waiting for the day to bring him something worth waking up for.

As far as Sacha could tell, the only remotely interesting thing about Maximillian Wolf was the extraordinary collection of food stains on his tie.

Moriarty's premise and world building are utterly delightful. The first few chapters give us a wonderful Jewish neighborhood in late nineteenth-century New York. For example, there's Sacha's uncle the anarchist and the neighbors who share a flat with Sacha's family: Mrs. Lehrer spends years sewing her savings into the lining of a coat. The baker, Mrs. Lassky, makes mildly bespelled pastries such as "Deliciously Efficacious Knishes...guaranteed to get any girl married within the year." The Wobblies are the Industrial Witches of the World, and the villain of the tale is a scarcely disguised Robber Baron, J.P. Morgaunt, while Sacha's fellow apprentice is gutsy Lily Astral (nice play on the name Aster!).

Then there's the shadowy figure who seems to be following Sacha... what does he want?

Sacha's family is proud of him for getting such a good job, and Sacha tries to focus on learning everything he can from the surprising Inquisitor Wolf. He also begins to tolerate and then appreciate Lily, who is tougher than she looks.

The mystery the team is trying to solve has to do with an attempt on Thomas Edison's life, but that winds up being only a small part of a much more complex and devious plan. Moriarty's plot takes a couple of surprising turns as the story progresses, working its way up to a highly dramatic climax involving Houdini.

The Rag and Bone Man, Hexers, and dybbuks mix it up with other strange magical influences and famous figures (slightly revised) in this well-written, satisfying historical fantasy. (Be sure and watch for an appearance by Teddy Roosevelt.) Although the plot wraps up nicely, we are left with a dark glimpse of the next book. I can't wait to read the sequel!

Note: I requested a copy of this book from Amazon Vine. The Inquisitor's Apprentice will be out on October 4.

Posted by KateCoombs at 7:52 AM

Has there been a sudden upswing of mystery/fantasy combos recently or am I just suddenly noticing them more? Either way, I am all for it.

Amy--I think you're right. For example, I recently reviewed The Wizard of Dark Street, which is also a mystery/fantasy combo set in NYC (or right next door) in the late 1800s. I like the way people have been reinventing the genre lately! I think maybe these settings are influenced by steampunk, though. The Inquisitor's Apprentice has a definite steampunk element in the form of certain inventions.

Sounds interesting! Is the Thomas Edison character nice? My great-grandmother used to work for Thomas Edison back in the day, and she said he was awful and used to spit tobacco on the girls' skirts.

Jenny--Ha. Well, Moriarty's Edison is a bit of a ladies' man, and he's not exactly heroic, so maybe this author did her homework!